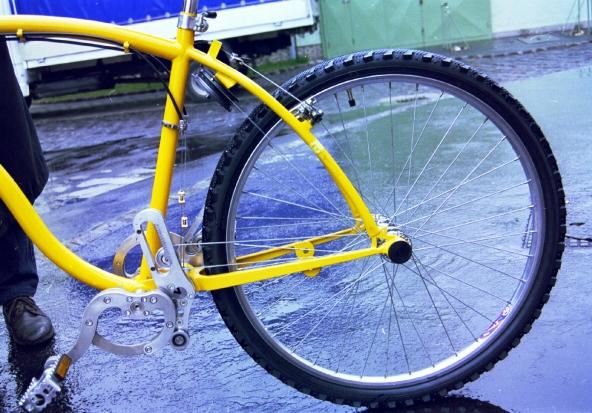 A Hungarian design team has unveiled a new chainless bike, powered by steel wires, that easily disassembles and can be organized for touring or racing.

The “Stringbike” uses two steel cables attached to pulleys, which move on swinging kidney-shaped discs as you pedal. The discs replace a traditional round gear system, and you can install different discs depending on your needs, according to the Web site Hungarian Ambiance.

The position of the pedals determines the position of the discs, so that they swing in opposition — one is always pulling the bike forward, and the other lags behind. This allows a continuous transmission change, which could help a rider navigate winding streets, because you can more easily control the transmission without having to shift gears. This video demonstrates the concept.

Unlike a typical 10-speed with a derailleur, you won’t feel any slippage when you shift gears — higher or lower gear is obtained by higher or lower placement of the pulleys.

The wires can even be set asymmetrically, which would provide a different weight load on each leg because one would have to work harder than the other. This is impossible with a traditional geared bike, but it could be useful for training or for riders with injuries, as Hungarian Ambiance points out.

The Stringbike, developed at bike-maker Schwinn Csepel Ltd., is also more convenient for those without racks — both wheels come off quickly and cleanly, because there are no chains or derailleurs to align. Bike commuters won’t have to worry about chain grease soiling their khakis, either. And because there are fewer components, it could eventually be cheaper to produce than traditional bikes.

Plus, it looks cool, meaning the Stringbike could be the hipster set’s next obsession. At least it’s more functional than the ubiquitous fixie.