New York's Museum of Food and Drink unveils its first exhibit, with a bang. 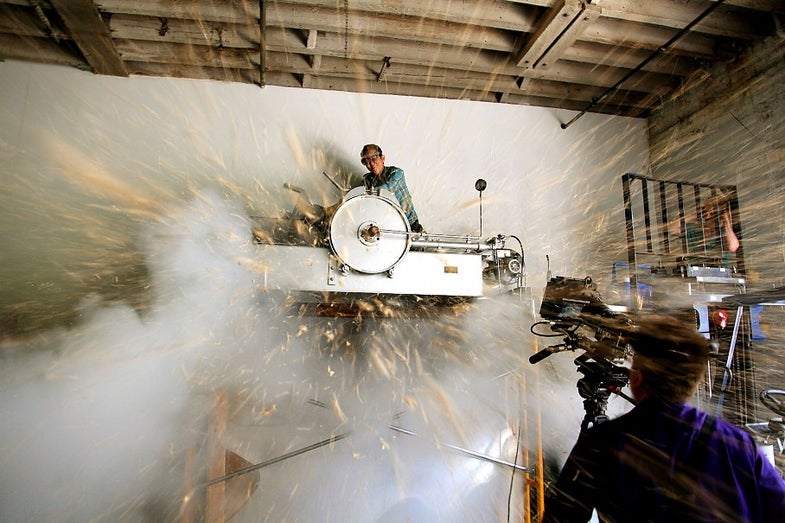 The split-second when the cannon fires. Peter Kim, executive director of the museum, stands on top to give it its inaugural whack. Paul Adams
SHARE

In a borrowed warehouse space in Brooklyn, I witnessed last week the first test-firing of what will soon be the heart of the Breakfast Cereal exhibit at the Museum of Food and Drink. Friend of PopSci Dave Arnold and his museum crew have acquired a working 3,200-pound specimen of early-20th-century food technology: a grain-puffing cannon.

This is how puffed cereals like Kix were originally made. An iron chamber is loaded with uncooked rice and a dose of water, then tightly sealed and heated with a gas burner to hundreds of degrees, till the steam pressure inside the chamber mounts to 180 psi. Then the chamber is abruptly opened — this is done by climbing on top of the pressurized rig and whacking its handle with a metal cudgel — and the door to the chamber opens in a loud puff of steam. The water that had been inside the rice kernels evaporates in a flash, instantaneously expanding to many times its original volume, and causing the structure of each grain to expand as well into a delicate puff. Check out the photos from the event.

For the celebratory first blast, the cannon was erected on a scaffold eight feet high, with its nozzle firing down into a chamber built to collect the puffs. I stuck an indestructible GoPro Hero3 camera down on the floor of the chamber, looking directly up at the gun to capture the action. When the lever was released, the sudden decompression made all the grains blast out of the gun’s port, so that crispy little snacks shot mostly into a custom-built receiving room but also scattered around the warehouse. Watch the slow motion video to the right.

More advanced methods for puffing rice and other snacks, which work on a continuous rather than batch basis, and don’t require the manual whack, have largely supplanted the exciting cannon method. But it’s alive and well at MoFaD, which is currently in its fundraising stages of being brought to life somewhere in New York.

The cannon will be on display as part of a traveling exhibit later this year. Bring earplugs. 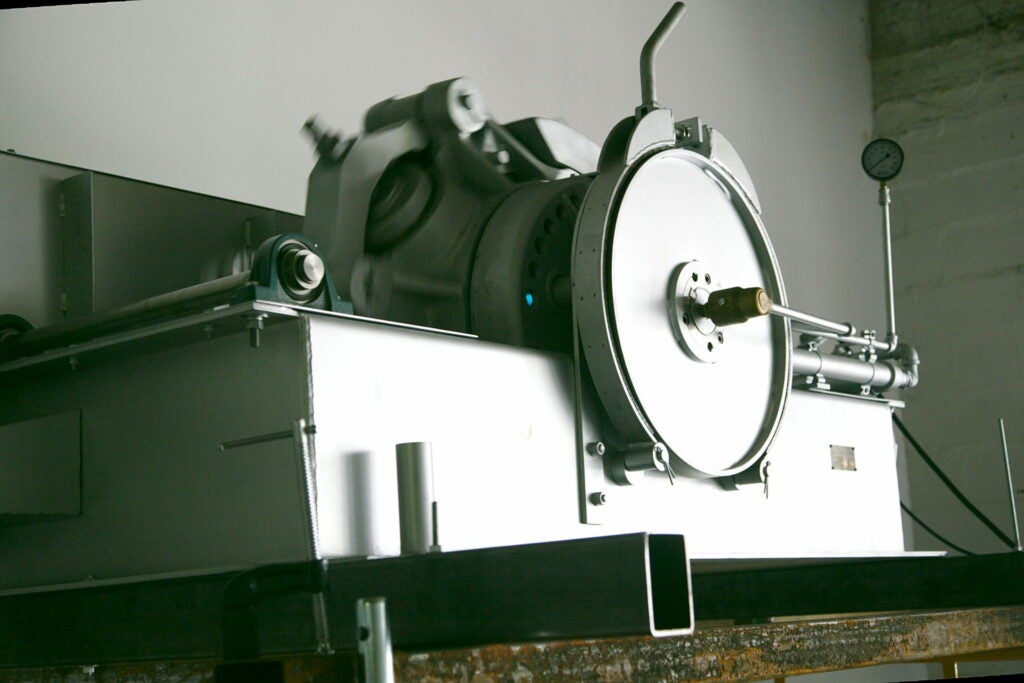 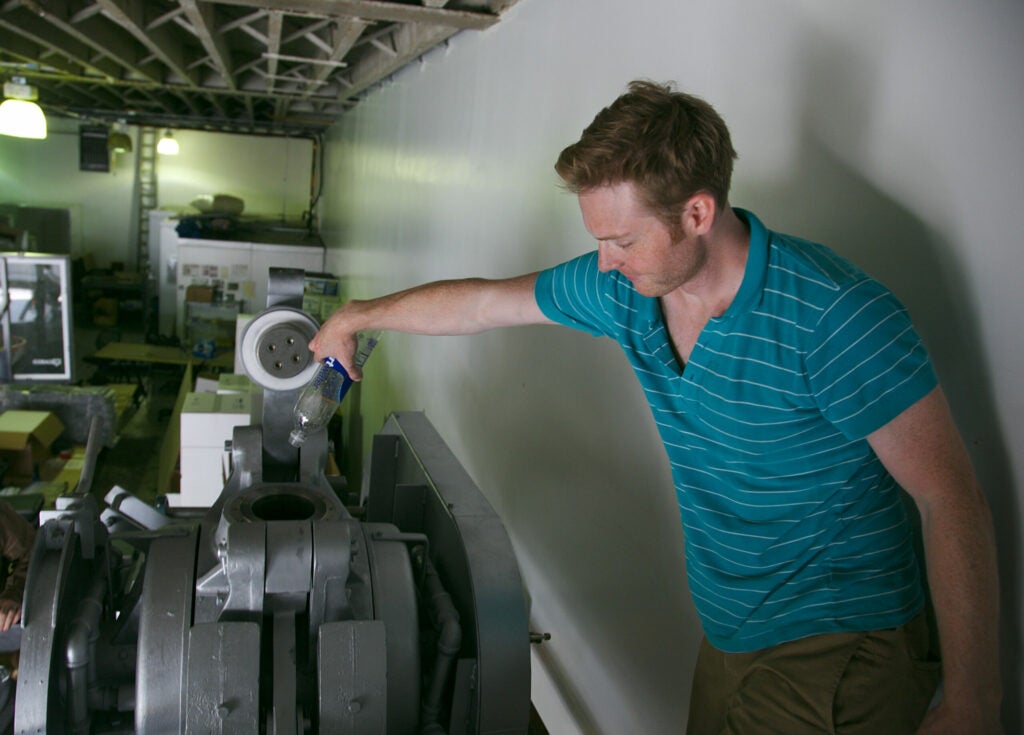 Lab manager Piper Kristensen pours rice and water into the chamber of the gun. 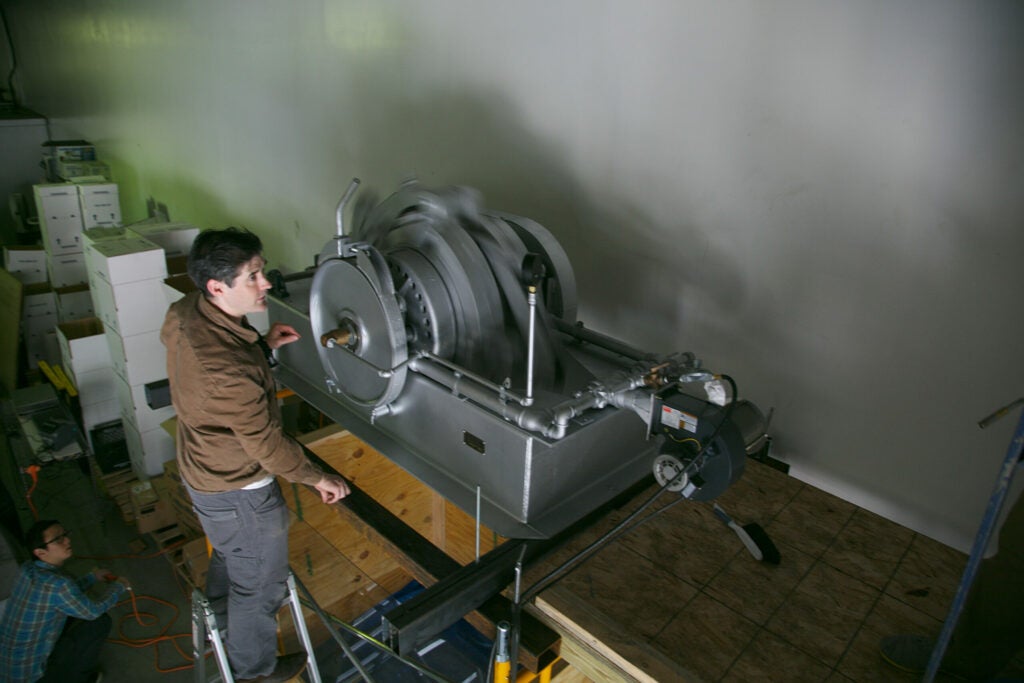 On a stepladder, Dave Arnold oversees the turning on of the machine’s motor, which spins the chamber to achieve even heating. 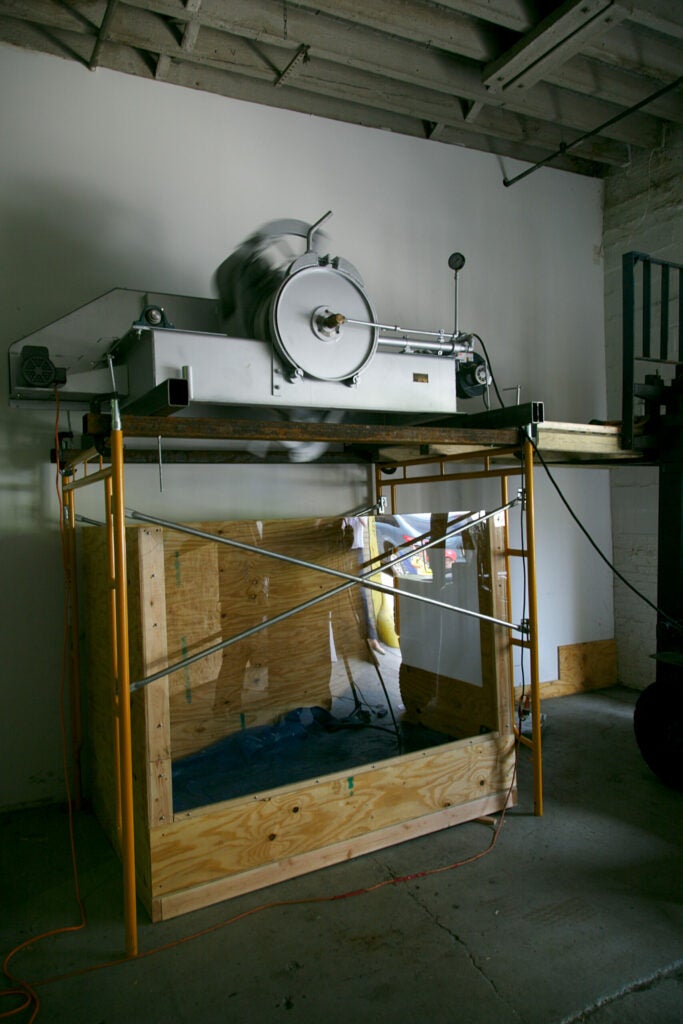 The cannon has to build up to 180 psi of pressure before it can be fired. It is mounted on top of a Plexiglassed-in chamber to catch all the puffed rice it will spew. 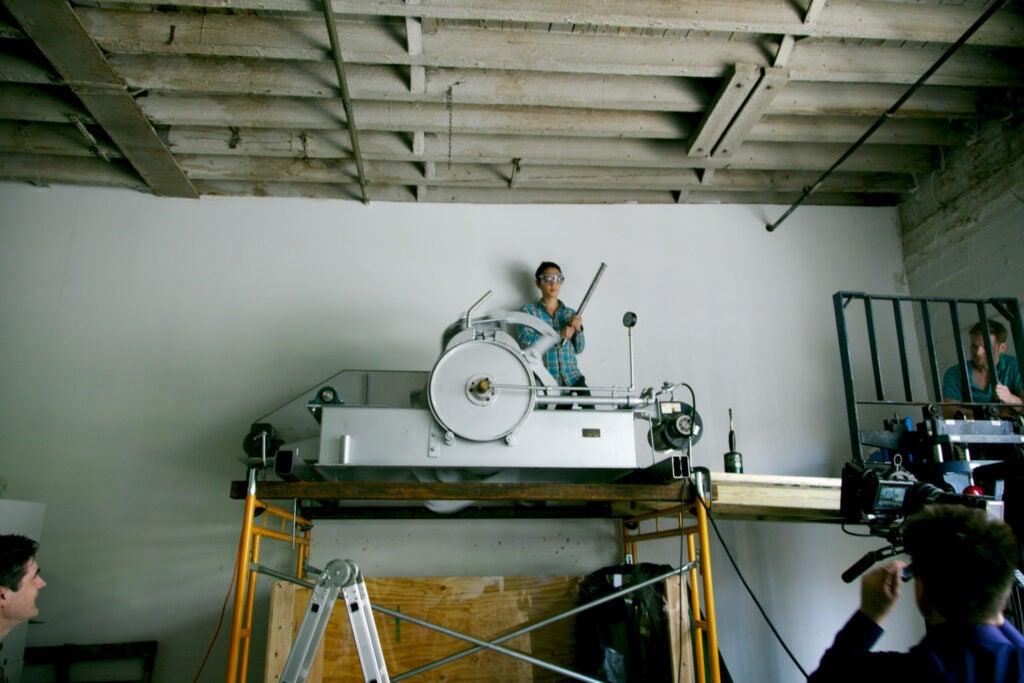 Peter Kim gets ready to whang the handle and fire the cannon. 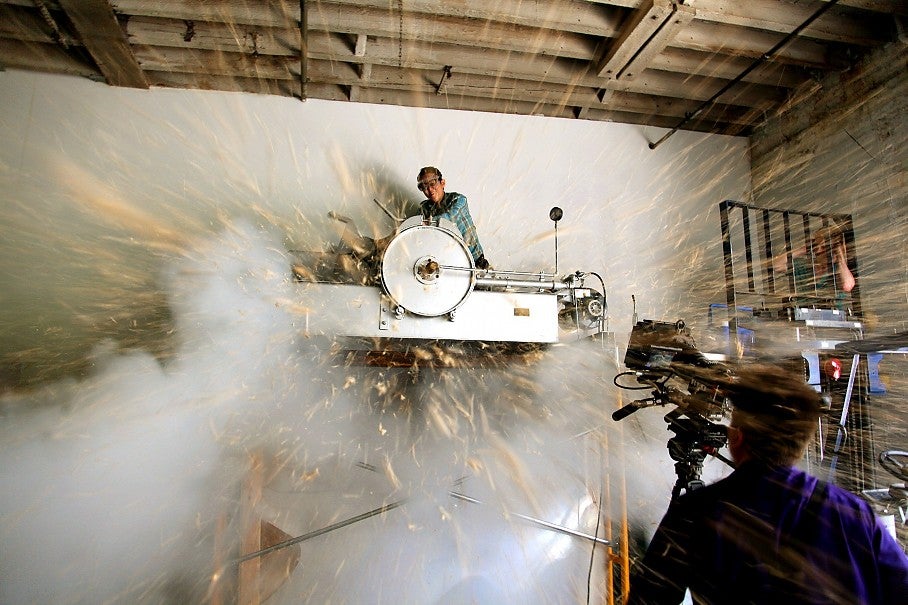 The split-second when the cannon fires. Peter Kim, executive director of the museum, stands on top to give it its inaugural whack. 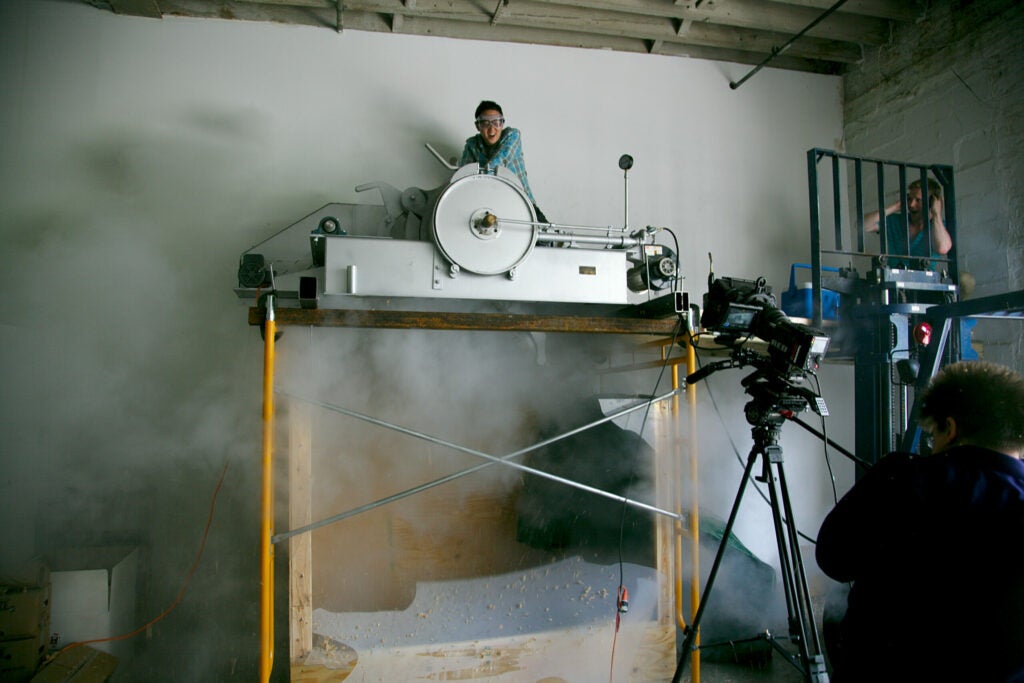 One second later, puffed rice is all over the room, as the steam clears. The Plexiglas is shattered. 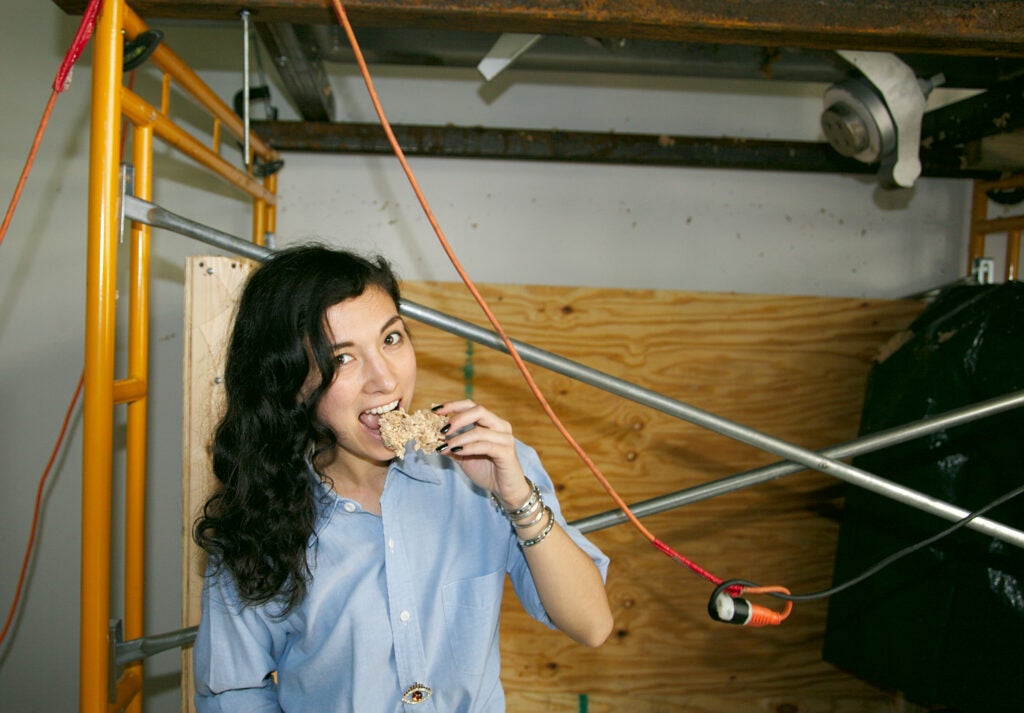 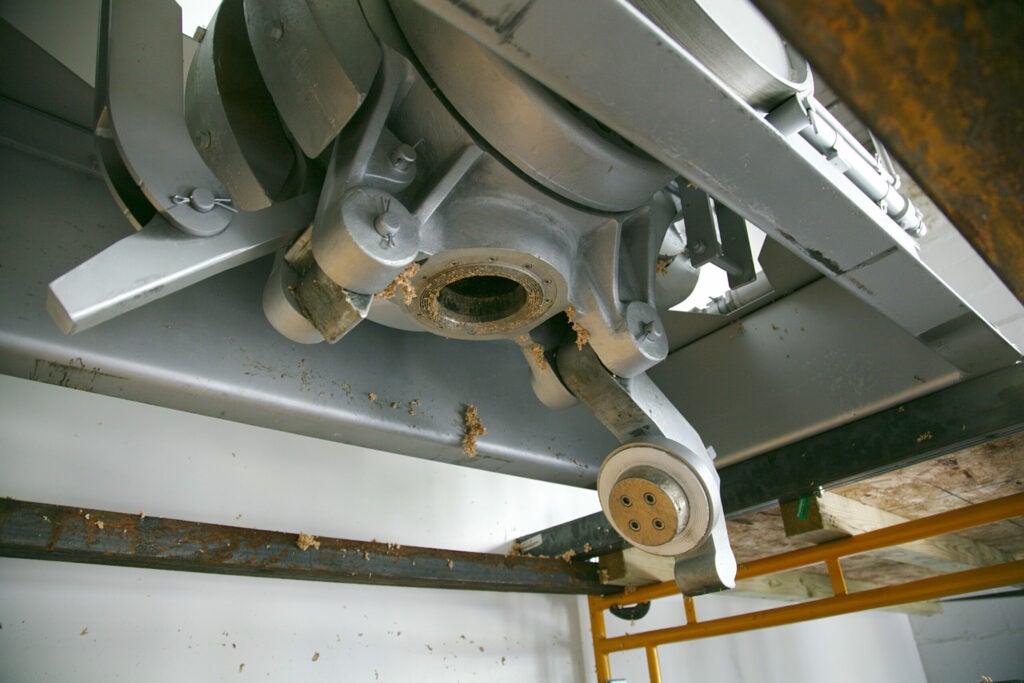 This is how the underside of the gun looks after it’s been fired. Just a bit of sticky rice residue. 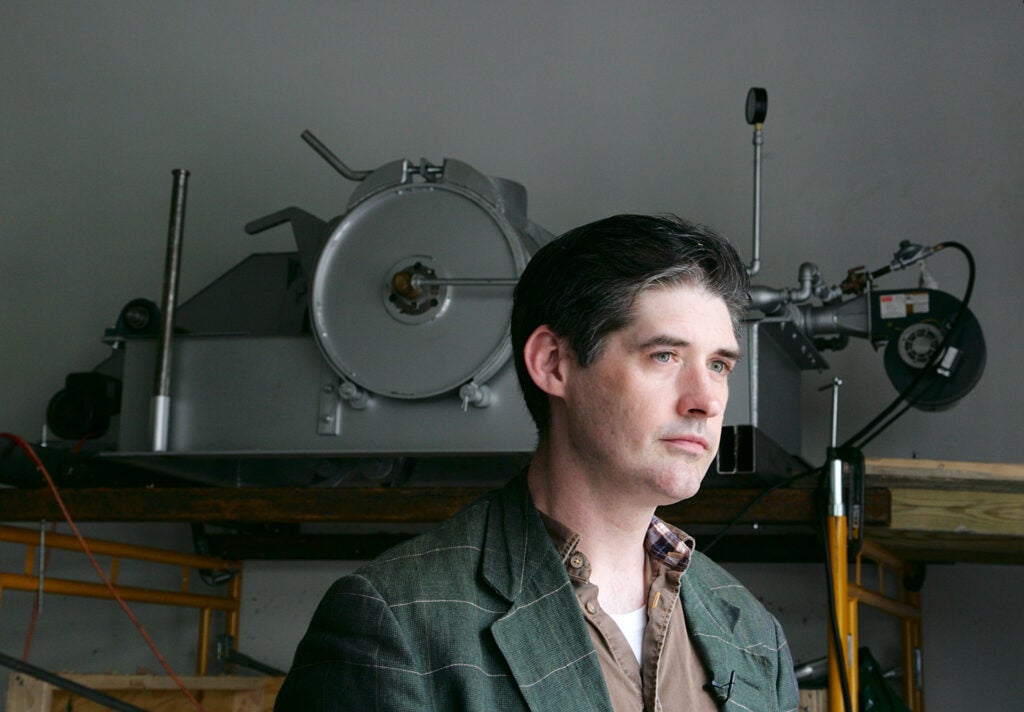