This $60 mouse has the same motion tracking skills as pro gaming inputs. 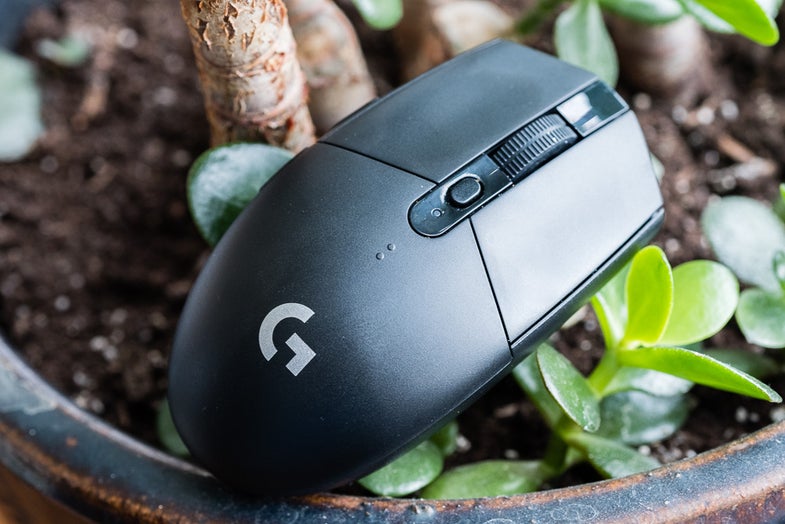 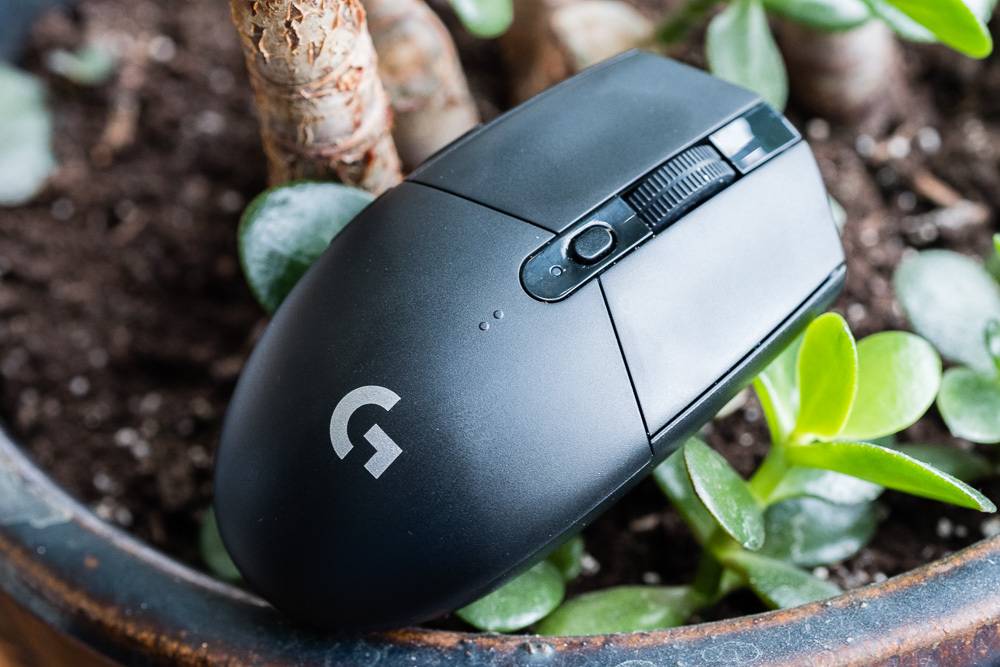 This plant is not a good mousepad, but the G305 works great on a desk.

I have a complicated relationship with computer mice. Sit me down at a workstation and I’ll use whatever two-button nonsense is available, but when it comes to actually choosing one for my own work, I get really picky. I want the mouse to have a high-end sensor meant for gaming because it lets me move quickly and accurately around the screen. I don’t, however, want a lot of bright colors and an endless parade of customizable options that I won’t use.

Logitech’s new G305 mouse costs $60, which is cheaper than most high-end gaming mice, but it contains the company’s flagship HERO tracking sensor (the part that lets the mouse see where it’s going) that’s meant for fast-twitch video games. It also has Logitech’s Lightspeed wireless connectivity, which gives it a short, 1 millisecond latency required for fast-paced games. The result is a powerful pointer without a lot of bells and whistles. 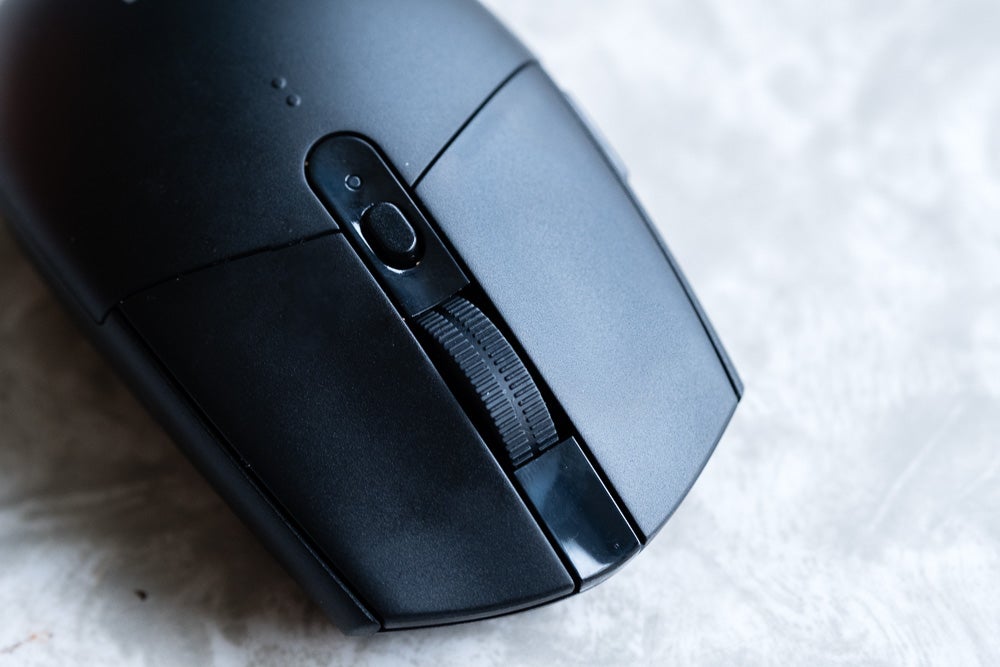 The straight-forward design of the G305 doesn’t give you fancy curves or mixed materials for grip, but it’s simple and comfortable.

Pick up the G305, and it doesn’t feel much like a gaming mouse. The plastic casing has a light texture that’s consistent across the surface. There are no fancy contours or added grips. It feels like an office mouse. It’s also light at just 3.5 ounces, and there’s no way to adjust the weight like you can with other competition gaming inputs. Personally, I consider these positive aspects.

The mouse has a neutral shape, but there are two buttons on the left side that you can hit with your thumb when using your right hand. Lefties can hit the buttons with their pinkies, but it’s slightly awkward. Over the course of a week or so using the G305, I found myself accidentally hitting the thumb buttons from time time time, specifically when I took my hand off the mouse to type, then went back to holding it. That phenomenon surely varies with the shape of your hand, but it seems safe to assume misclicks will happen from time to time. It’s not a deal breaker for me, but the shape of your hand could change that.

The construction clearly isn’t meant for this mouse to bang around in your bag like other portable mice, so plan to leave this one on your desk most of the time. 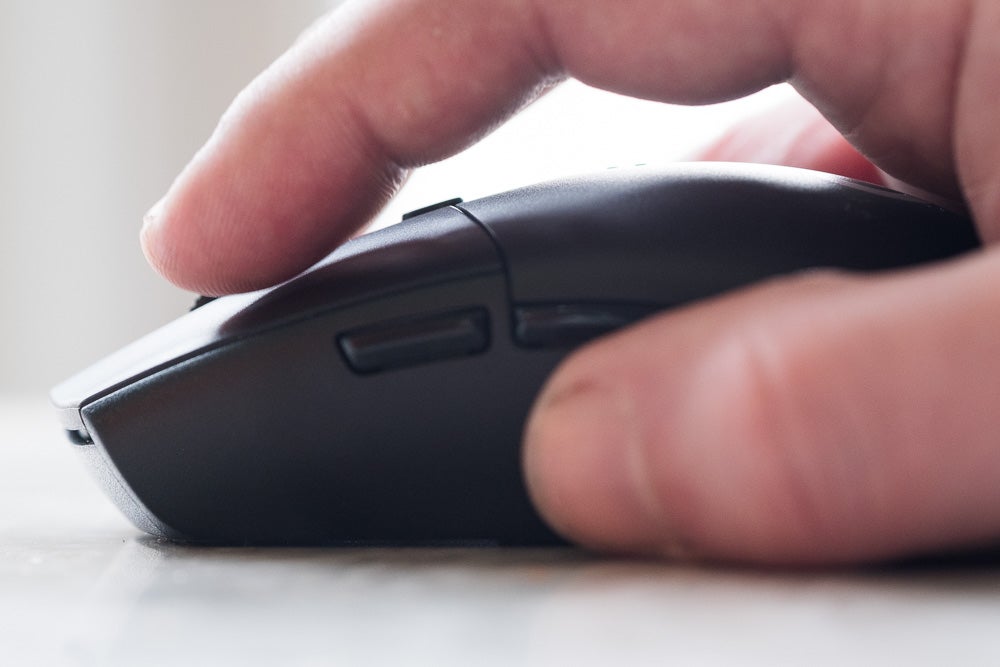 The programmable buttons on the side of the mouse led to a couple accidental clicks. The frequency dipped as I got used to the thumb placement, though.

I spent a week using the G305 as my main mouse, using it for typical computing tasks (like clicking around while procrastinating writing this post), to more intense tasks like playing a first-person shooter game, Overwatch, and doing some Photoshop retouching.

My computer immediately recognized the mouse when I plugged in the dongle, and while I’m not thrilled about taking up one of my USB ports instead of relying on a Bluetooth connection, I did find the connection quick and extremely reliable.

There are four sensitivity settings between 200 and 12,000 dots per inch, and you can cycle through them on the fly by clicking a button below the mouse’s scroll wheel. Everything except the fastest setting felt slow to me, especially when zipping around a multi-monitor setup. However, I did get some use out of the slower settings when doing some particularly tedious selections in Photoshop. The increased accuracy is nice, even if it did feel sluggish.

The mouse clicks are satisfying in terms of depth and tactile feedback, but the sound is high-pitched and rather loud, likely because of the buttons’ plastic construction. The clicks aren’t quite as luxurious or substantial as some expensive gaming mice, but this is not a deal breaker. If you work in close proximity with your officemates, you might consider something a little quieter.

The G305 lives in the middle ground when it comes to tech, which is honestly where many of us land in the technology spectrum. The feel won’t blow you away—and the click sound is a little annoying until you get used to it—but the most important parts of the mouse are rock solid. A single AA battery powers it for 250 hours of action. The tracking sensor is precise and doesn’t skip around the screen, even when the condensation from my iced coffee messes up my desk a little.

At $60, it’s not the cheapest wireless mouse on the market, but if you want something that gives better-than-average gaming performance in an everyday-driver-style input device, it’s a solid pick.