Eating allergens seems like it should reduce sneezes. In practice? Not so much. 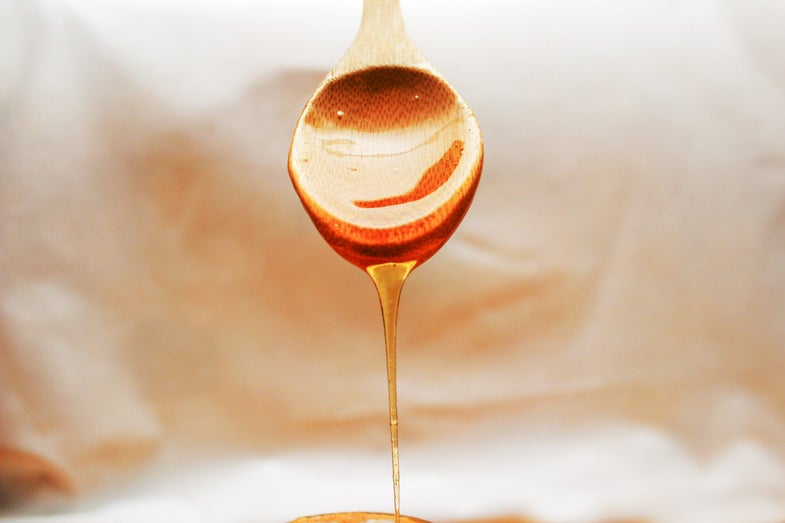 Eating local honey to prevent the springtime sniffles seems like it should work: local bees collect pollen, pollen gets into the honey, you get exposed to the allergens, and your body learns they’re safe. The belief that this works is so widespread that a group of scientists decided it was worth testing.

But first, they started with an open-label trial. That’s the technical, jargon-y term for a study where participants know whether they’re getting the real treatment or a placebo. Volunteers with seasonal allergies showed up and were told either to eat a tablespoon of honey every day or to eat corn syrup flavored with artificial honey. Those eating the honey reported statistically significantly lowered symptoms—it was so promising that the researchers decided they really did need to see whether honey could help with allergies.

So they progressed to a double blind trial—one where no one knew what they were getting.

Participants this time got divided into three groups: one got local honey, one a national pasteurized honey, and one the flavored corn syrup. They ate a full tablespoon every day. If this sounds thoroughly gross to you, you are not alone. Out of 36 initial volunteers, 13 dropped out because the regimen was too sweet for them. Those who survived eating a tablespoon of honey every day for 30 weeks mailed in journals regularly tracking their perceived allergy symptoms.

It’s possible, of course, that the participants simply weren’t eating enough honey. The scientists note in their paper that oral consumption of allergens has historically been shown to be an effective way to train the immune system not to overreact. It follows that the allergens in honey should help train people’s bodies. If that’s the case, though, we’re still out of luck. Not many people will be able to tolerate eating multiple tablespoons of honey every day.

One more promising study suggests that it might also be about the type of honey. Local honey will have a variety of pollen sources, each of which may not be enough to have substantial microbial communities to train the eater’s immune system. Finnish researchers decided to test the effect of birch pollen honey—regular honey, but with added bee-collected birch pollen. Birch pollen is one of the dominant season allergy sources in Finland, so the scientists gathered volunteers who were allergic to the tree and prescribed them either regular honey or birch pollen-enriched honey. A third control group ate no honey. Those who got the extra birch pollen had significantly reduced symptoms and more symptom-free days, even more than those who got regular honey.

The one problem with this study is that the control group didn’t get a placebo. They were simply advised not to eat any honey-containing foods during the study period. It’s very possible that both forms of honey produced a strong placebo effect. The differences between the regular honey and birch pollen honey group weren’t statistically significant, so this study may be a fluke. Or, the extra pollen may really have helped. We’re still not sure.

All this being said, like all naturopathic remedies, you may genuinely feel better taking honey. These studies prove that the results you see are most likely the placebo effect—but the placebo effect can be helpful. If you believe the honey helps, then the honey helps. All that matters in the end is that you feel better, and if eating a tablespoon of honey is what enables you to spend summer days outside in the grass, you should go for it. Honey is delicious. Worst case scenario, you’re consuming a natural sweetener that’s less of a blood sugar rush than table sugar. Best case scenario, you help your allergies. It’s no surprise this particular remedy has a lot of buzz.