Old ice in the Arctic is vanishing. That's a problem, since it's more resistant to melting than young ice. 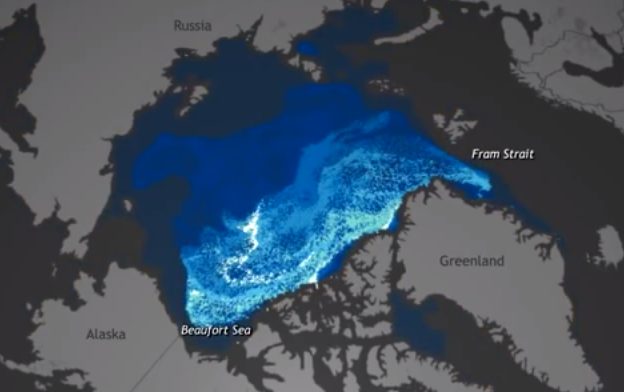 You’ve probably heard that ice in the Arctic is melting. But you may have never seen it shown this clearly. A video from the National Ocean and Atmospheric Administration shows 27 years of ice melting away in a matter of seconds.

Of course sea ice remains, but much of the older sea ice is now gone. In 1988, ice that was at least 4 years old accounted 26 percent of the Arctic’s sea ice, as Climate Central reported. But by last year, ice of that age accounted for only 7 percent of all Arctic sea ice.

That’s a big problem, since older ice is thicker and more resistant to melting than new ice, which generally melts away each summer. It could also lead to a feedback cycle–the white ice reflects light, and discourages surface warming. But dark, ice-free water absorbs more solar radiation, leading to more heating.

In related news, measures of Arctic ice recently dipped below a record low for this time of year. Even though it’s been colder than average in much of the central and eastern U.S., it has been warmer than usual in much of the Arctic.

This video shows how the volume of sea ice has gone down in the past few decades: