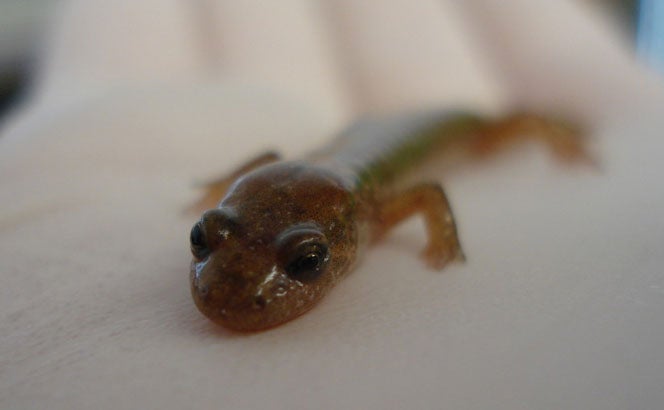 Lungless salamanders possess relatively weak legs. But don’t step to this little amphibian–they would beat humans in an interspecies jumping competition, at least compared to their size. Several species of lungless salamanders (in the family Plethodontidae) can leap like a charm, thrusting themselves forward up to 10 times their body length. Observe:

But how does a slippery little character with puny legs do this?

That’s what Anthony Hessel, a graduate student at Northern Arizona University, is trying to find out. The initial answer is that they propel themselves with a special sort of motion Hessel terms a “hip-twist jump,” a sort of “flat catapult.”

“This particular jump is unique in the world,” Hessel said in a statement.

It works like this, as Hessel writes on his blog:

The salamander bends its body into a C-shape and then pushes that bend into the hips (think of a wave caused by moving a stretched out slinky from side to side). As the wave moves through the hips, they rotate; this rotation pulls on [one] hind limb, which is planted in front of the hip. Because the movement of the hip is away from the planted foot and the foot is anchored to the ground, the hip rotates towards the foot at such speed (17 body lengths a second!) that it catapults the salamander over the planted foot, achieving liftoff.

Consider rock climbing: you reach way over your head and grab a ledge. At this point, your shoulders are not lined up because of the arm stretch. If you bring your free hand’s shoulder to the level of the anchored shoulder, you will raise your body. The salamander jump works the same way, except this happens so quickly that it throws the salamander over the planted foot.

Next he will investigate special properties of the salamander body, such as its elasticity, that allows it to pull off such an efficient leap, despite the “inefficient-looking mechanism.”