Ask Anything: Can You Hypnotize An Animal?

Lassie, stare deeply into my eyes. 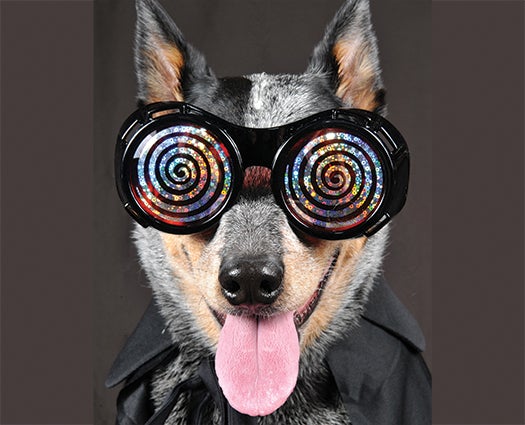 Laboratory studies of “animal hypnosis” were fairly common in the 1970s and the 1980s. One paper defined its subject as “a state of prolonged, reversible immobility which is brought about by different types of sensory stimulation and is characterized by passivity and lack of responsiveness.” The researchers go on to give an easy method for producing this phenomenon: Just hold the animal in a fixed position on its back or on its side until it stops moving. When you release your grip, the animal will persist in a trancelike state, unresponsive to other stimuli and somewhat impervious to pain.

This is not so much a case of animals being hypnotized as playing possum. Going limp while under threat makes predators lose interest and move on to other prey. “The name ‘animal hypnosis’ implies a lot of things,” says Gordon Gallup, Jr., a psychologist at the State University of New York at Albany who started working on this behavior among chickens in the 1960s, but the connections are mostly superficial. In fact, the “hypnosis” label has fallen out of favor; most researchers now describe the state as one of “tonic immobility.” Still, the catatonic state appears to be widespread in nature, and it’s been observed not just in chickens but in rabbits, guinea pigs, sharks, ducks, alligators, and Fijian ground frogs, among other animals.

Animals
Ask Us Anything
ask anything
march 2014