Your Next Cooking Oil Could Come From Hemp

A new strain of hemp produces oil with all the qualities needed for fine frying. 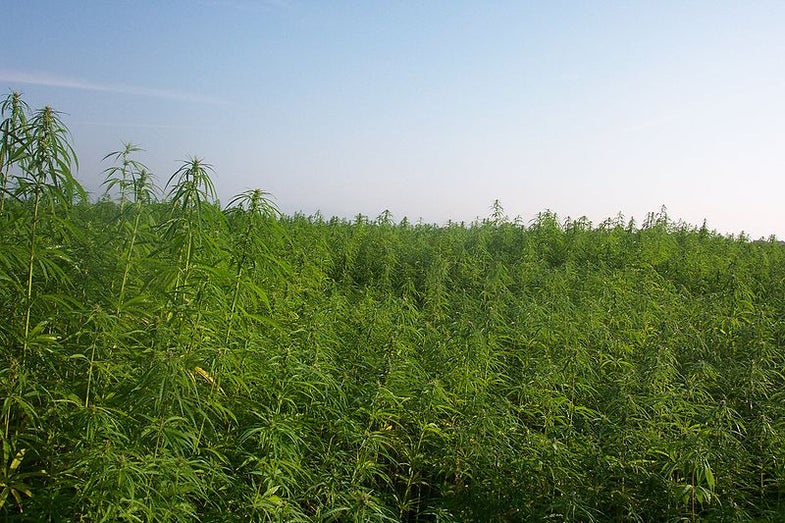 Agricultural hemp produces strong and decay-resistant fibers, a versatile oil, and requires little in the way of herbicides, since it outcompetes weeds. Hemp oil isn’t widely used for cooking, though, partially because it turns rancid swiftly if not refrigerated. Now genetic researchers have developed a new version of hemp that produces an oil similar to olive oil in terms of its fatty acid content (specifically, containing a large proportion of oleic acid), and which lasts seven times longer than the product from the unmodified plant.

The new strain was produced by using genetic techniques to disable two genes involved in the production of polyunsaturated fatty acids, and thus the plant produces more mono-unsaturated fats like oleic acid. This is an omega-9 fatty acid, and considered to be one of the healthier sources of fat in the diet. “The main benefit is that the oil is significantly more stable, having a longer shelf life at room temperature which extends to cooking and industrial applications,” said Ian Graham, a researcher at the University of York, in England.

The oil could make the plant a profitable “break crop,” one grown between rotations of staples like corn and wheat, Graham told Popular Science. In addition to its oils, the plant also produces fibers useful in animal bedding and other applications. The new hemp line is being tested throughout several sites in Europe, and may be ready to roll out commercially in two to three years, he added.

While hemp is legal to grow in Europe and Canada, it is still prohibited in the U.S. under federal law. Under the new farm bill, however, a number of pilot projects to grow hemp are allowed, such as five projects in Kentucky, USA Today reported.

A study describing the new crop was published this month in the Plant Biotechnology Journal.