Kirigami is changing the way we design materials 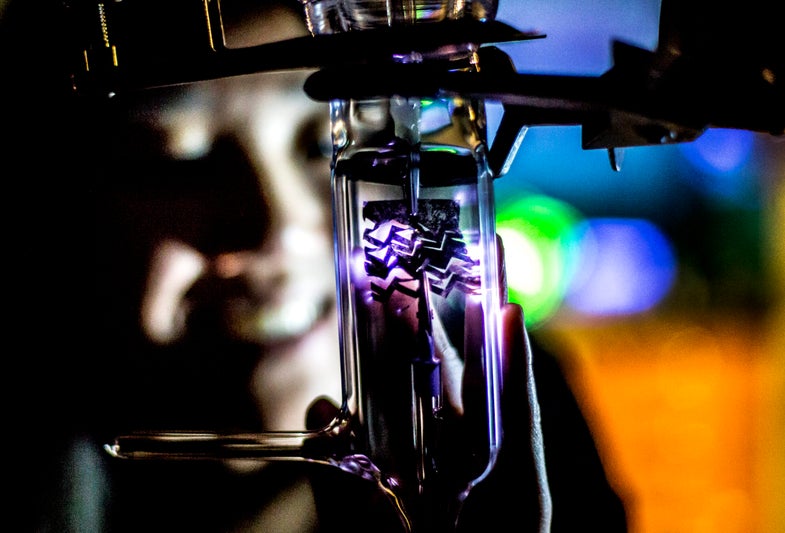 Terry Shyu, MSE PhD Student and Graduate Research Assistant, demonstrates a stretchable conductor's ability to conduct in the HH Dow Building on June 10, 2015. The stretchable conductor is made out of a mesh structure of carbon nanotubes that Shyu has made as part of her work with Nicholas Kotov, Joseph B. and Florence V. Cejka Professor of Chemical Engineering; Sharon Glotzer, Stuart W. Churchill Collegiate Professor of Chemical Engineering; and Matt Shlian, Artist and Adjunct Lecturer in the School of Art & Design. Shlian provided the inspiration for the nano structures with his nano-kirigami art that Glotzer built computer models from and Kotov and Shyu tested in lab. Photo: Joseph Xu, Michigan Engineering Communications and Marketing www.engin.umich.edu.
SHARE

Thanks to the art of paper cutting, Kirigami, soon stretchable plasma displays and batteries will become a more viable reality.

Material design teams across the country are taking cues from this variation on origami—popularized in the US in the 1960s and used to make paper arts and crafts here ever since —to design stretchable and flexible conductors (materials that conduct electricity). Conductors are the basis of modern electronics: every phone, TV and computer uses them.

Researchers at the University of Michigan took a microscopic approach at Kirigami-inspired conductors, making small incisions in conductive material to spread stress over a larger, predictable area. Unknown and varying points of strain are the biggest obstacle when designing flexible materials, according to Dr. Nicholas Kotov, professor of engineering at the University of Michigan.

“Typically the strain [the conductor] can withstand is two percent,” Kotov said. “But when we put the pattern of Kirigami over that sheet, it turns out we can indeed increase the strain dramatically, by at least a couple of orders.”

The study, published in Nature Materials, says that composite sheets can actually withstand up to 370 percent strain, up from an original four percent.

In this method, the material itself expands; it’s an extremely stretchable, flexible mesh with distributed stress. But, to avoid gaps in the display when used in plasma screens, Kotov says that the material would have to be layered, and the cut would be much smaller than current prototypes.

The technology is still far away from being used as displays in consumer technology, but Kotov says that the idea behind this technology is versatile, and can be used in a myriad of applications.

And at Arizona State University, researchers are focusing on redesigning lithium-ion batteries with Kirigami. But instead of making micro-cuts in the material itself, they’re cutting the shape of the material to be folded into stretchable figures.

Dr. Hanqing Jiang, associate professor at ASU, says that his team was able to make a flexible 400 mAh lithium-ion battery with this technique, able to double the capacity of a modern smart watch. His design hopes to make the watch band the battery, saving valuable space in the watch and making the hardware thinner.

“The watch needs to face our physical environment,” Jiang said. “The current smart watch, the battery is limited by the volume. In the strap, the volume is not used yet.”

Jiang, who has been publishing studies using origami to make batteries, likens the technique of cutting conductive materials to cutting a out a paper doll chain, like a children’s art project. With this method, the ASU team is able to make pliable batteries without making them excessively thick, and Jiang says there’s no limit to how large the batteries can be—their only constraint is volume.

The researchers at ASU have licensed this technology to a few unnamed companies, but are continuing to focus their research on wearables and consumer electronics.

Kotov is familiar with Arizona State University’s research, and explained how their technology differs.

“[Jiang] has made the battery and Kirigami pattern at macro scale,” Kotov said. “What we have done is by smaller scale. We went from bottom up, and he top down.”