How to See the Future In Kids’ Drawings

Give a kid a pencil, and she’ll draw a blob – but pretty soon that shape will start to have... 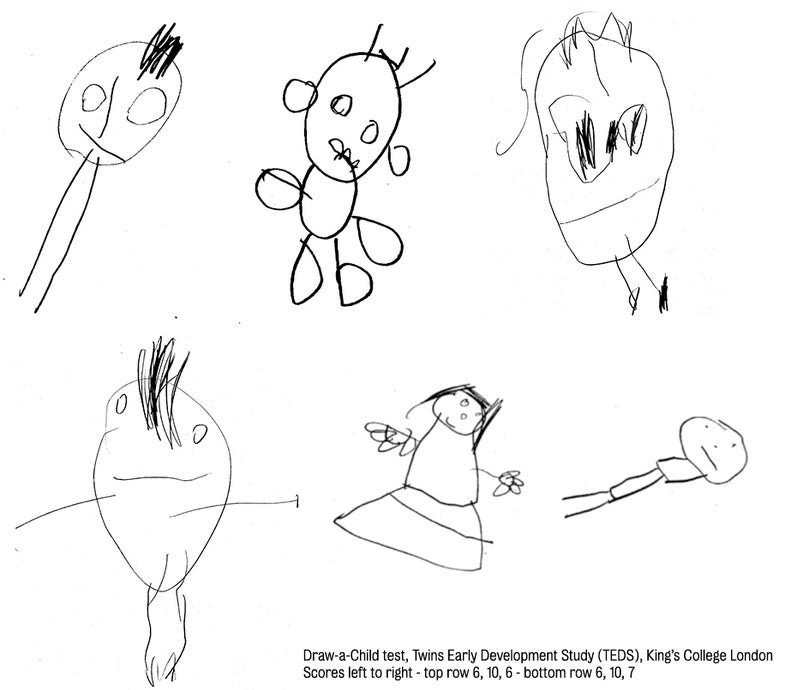 Give a kid a pencil, and she’ll draw a blob – but pretty soon that shape will start to have a face and body. Stick drawings are an easy way to monitor cognitive development, and a new study finds a link between the ability to draw well and intelligence years later.

Rosalind Arden, a cognitive psychologist at King’s College London, got interested in the question of art and intelligence. She started looking at data from 15,000 twins who were part of identical or fraternal twin sets. The twins had to draw a picture of a child at age 4.

The drawing test itself has a long history. Florence Goodenough, a psychologist at the University of Minnesota, conceived of the test in 1926. It was easy – just ask kids to draw a human figure as completely as possible – and it was cheap and easy to score. It was also pretty accurate, compared with the complex IQ tests of the era.

In this test, the researchers scored the drawings on a scale of 0 to 12, depending on the accuracy and completeness of the depiction. Having an arm, for example, scored the drawing received one point, as did facial features and clothing. The children also received intelligence tests, which correlated with the drawing ability even at 4.

Ten years later, the researchers gave the children another IQ test, and found that children who scored higher on their drawings at 4 were also likely to score higher at 14. The study was published yesterday in the journal Psychological Science.

“Every twin dyad was in a situation where they were raised by the same parents in the same home, and presumably when they would draw they would do it together, so it seems likely that children would imitate each other, regardless of whether they’re identical or non-identical,” says Arden. It was surprising to find the link even though we know that so many traits are heritable.

Arden points out that the genius of the drawing test is that requires a whole suite of cognitive abilities – but the outcome is a simple figure. But she warns parents not to fear that their kid’s drawing skills aren’t up to snuff. The most important finding, according to Arden, is that even though the study has found an association, it’s very small. “No one should look at their child drawing’s and say this is how this child is going to turn out,” she says.

The drawings also provide a link and a view into humanity’s deep evolutionary past. “It seemed striking to be that drawing comes to us as a cognitive behavior from 40,000 years back, and nothing else does,” she says. Scientists believe that grooves deep in the clay walls of Cave of a Hundred Mammoths in Rouffignac, France, may have been the first kid drawings – likely done by a pint-sized artist.

Being able to show another person something that exists only in your mind is a highly evolved trait, and sometimes it requires a step back to recognize that. “Think about it,” says Arden. “You take an image in your head of a banana and then express that image with your hands in two dimensions such that another member of your species can see what’s in your head – amazing. It is a precursor to writing, and it’s a fantastic thing that we do and other non-human animals don’t do.”