Escape from the desert into the sky 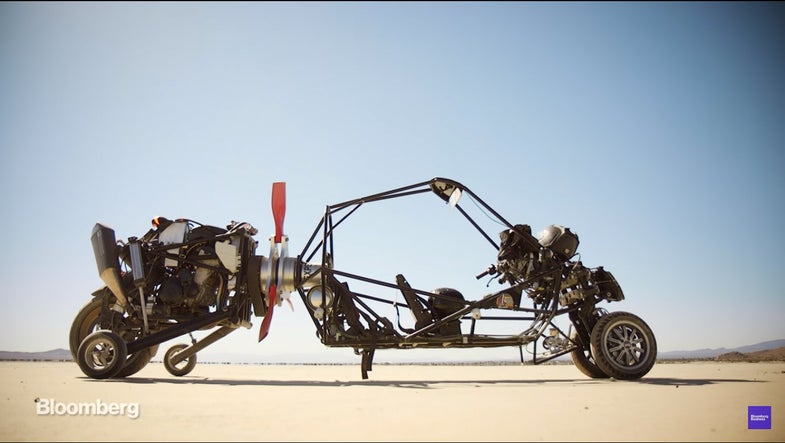 What will it take to get flying cars off the ground? Not a lack of interest: as long as there have been cars and flying machines, people have been interested in combining the two. Last month, the FAA even approved a flying car prototype as a light airplane, reviving hopes of someday turning boring ground commutes into amazing airborne commutes.

What if there’s another way to spur an aerial automobile revolution? Bloomberg recently visited Dezso Molnar, an aerospace engineer and pilot, to see his latest idea: a flying car, to spur a flying car racing league.

It starts with a lightweight narrow-bodied vehicle driving on the empty wastes of the Mojave desert.

Molnar’s plan is to combine this body with the rotor from a gyrocopter. While their overhead rotor makes them look similar to helicopters, gyrocopters have a major difference: in a helicopter, an engine spins the rotor, providing both power and lift. In a gyrocopter, a propeller pulls the vehicle forward, and the rotors spins passively, generating lift as an overhead spinning wing.

With a powerful propeller in the back of his lightweight car, Molnar’s vehicle seems only steps away from adding a rotor and freeing itself from the confines of the ground.