Here's what neuroscientists think is behind that tingly, euphoric feeling 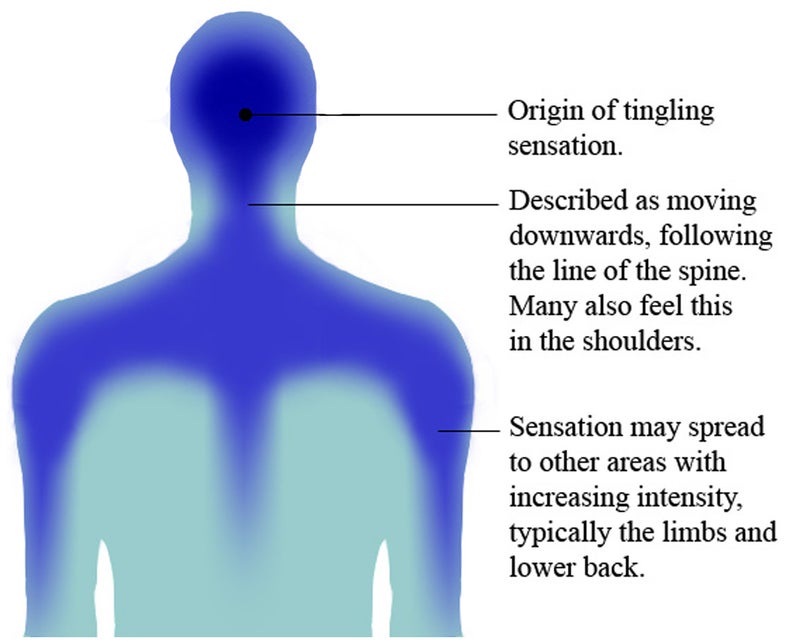 Soft voices whispering delicately. Nails clicking gently against something plastic. A brush moving against the soft padding of a microphone.

Videos like these abound on YouTube, often racking up millions of views—it’s not uncommon for the people who make them to have hundreds of thousands of subscribers.

Viewers seek out these videos because they can incite an autonomous sensory meridian response, or ASMR. Not everyone has knowingly experienced ASMR, but those who have characterize it as a tingling that runs from the top of the head down the neck and is accompanied by relaxation. Audio stimulation is the most common trigger, though other things like video or when someone pays personal attention to you in a caring way. Anecdotally, people say that ASMR can help them sleep better, relieve chronic pain, or reduce symptoms of mental illness such as anxiety and depression.

“I would explain [ASMR] as really good chills that feel akin to the chills you get when someone draws on your back or plays with your hair or watch someone do something like Bob Ross,” Heather Feather, a producer of popular ASMR videos (that makes her an ASMRtist) told Mashable last year.

While ASMR media might be big thing on the Internet, it hasn’t really caught on yet among the scientific community. Some have questioned whether it’s real—neurologist Steven Novella published in a blog in 2012: “I always start my investigations of such phenomena by asking the most basic question – is it real?” He believes it could be, as he goes on to say—enough people have experienced it independently that ASMR is a thoroughly plausible phenomenon. He speculated that it could be a mini-seizure, or an intense activation of the pleasure response.

One thing is for sure: scientists don’t yet understand what ASMR is, or why it happens.

To date there have only been a handful of peer-reviewed studies, and none has fully explained why or how ASMR happens in the brain. The one that has come the closest was published in March 2015 by Emma L. Barratt and Nick J. Davis of Swansea University in the United Kingdom. The researchers surveyed 475 people to get an initial sense for who experienced ASMR and what triggered it. Much of what the researchers found was in line with the anecdotal experiences of ASMR reported in various corners of the internet—98 percent of those surveyed watched videos to relax, 75 percent responded to whispering, 80 percent said ASMR affected their mood.

“The brain must be responding in some way when we experience ASMR, but we do not have a clear idea of how ASMR affects brain activity,” Davis, now a psychology professor at Manchester Metropolitan University, tells Popular Science.

The researchers made a few new suggestions as to what might be going on in the brain. “We thought when we planned this study that ASMR might relate to synesthesia, where brain areas from a ‘wrong’ sense become active when perceiving a different sense,” Davis says.

That correlation was not as robust as Davis would have liked, however. It’s also possible that ASMR might relate to a feeling of personal closeness since many of the stimuli are “intimate,” as Davis says.

Still, the researchers have more question than answers. They aren’t clear on all the possible physiological reactions that ASMR can cause. And though Davis suspects that most people, if not all, can feel some version of ASMR, it’s hard to measure from a scientific perspective because researchers still don’t know how to tell participants what they should be feeling.

Those who don’t think they can experience ASMR simply might not have found the right stimulus. “Emma [Barratt, Davis’ co-author on the paper] first told me about ASMR. When she described it to me I realized I had experienced ASMR my whole life, for example when getting a haircut or a massage,” Davis says.

Luckily for researchers, the internet has brought together a strong community of ASMR enthusiasts who are “engaged and helpful” towards scientists, as Davis says. The subjects are waiting, now scientists just have to get involved.

Davis’ paper was intended to serve as a starting point for scientists discussing ASMR. He has plans for a future study, and another team is investigating the physiological response to ASMR. If they can do so, not only would they get a glimpse into one of the quirkier functions of the human brain, they might uncover a practice that could be used to help treat a handful of neurological and psychological conditions.

If you haven’t yet tried to trigger ASMR for yourself, Davis recommends it. “ASMR is a safe and enjoyable way to relax, and everyone should check out a channel to see if works for them!” he says.