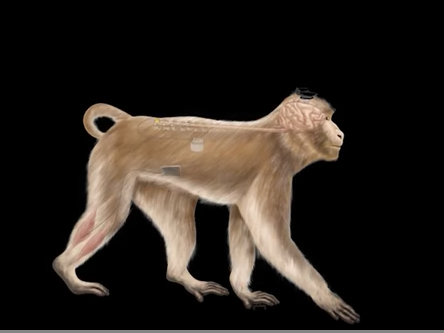 Paralysis was once thought to be a permanent condition, marked by broken signals between the brain and spinal cord that could never be fixed. But in the past few years, a better understanding of the brain’s neural wiring has allowed scientists to toy with the idea that this permanent condition can indeed be treated by restoring movement in lost areas. Now, researchers have taken another step forward: A new, tiny wireless device, implanted into a paralyzed monkey, allowed it to regain control of previously paralyzed areas of its legs, enabling it to walk again. This success represents another step in the path to creating similar devices for humans.

When a person becomes paralyzed, most – but not all – of the neurons that help signal muscles to move are broken. This keeps the brain from being able to send signals to certain muscle groups telling them to move. But if the body had a way of strengthening the few intact neurons, they might be able to do the heavy lifting themselves and restore the ability to move.

In the new study, researchers implanted tiny wireless devices into the brains of two monkeys that had been purposefully paralyzed — each lost the use of a hind leg. The device recorded electrical signals from the brain’s motor cortex, which controls movement, and sent them to a computer. The computer then translated those signals into a language that electrodes — connected to a group of neurons in the spinal cord — could understand. Their work was published this week in the journal Nature.

As seen in the video, the monkeys were able to move their paralyzed legs in conjunction with the other four as they walked. And unlike similar technologies that require a person (or monkey) to be somehow wired to a computer, this new technology is completely wireless. The monkeys wear a backpack which interprets and sends off the brain signals.

This success is just one of several achievements made in the last few years as scientists continue to better understand how electrical signals in the brain enable movement. But it’s unique, and not just because it ditches the usual cords: In an accompanying commentary on the study, Newcastle University neuroscientist Andrew Jackson points out that the new device is a “closed-loop stimulation”, which interprets brain signals in real time. The devices that are currently in use in humans with paralysis are open-looped, meaning they require repeated stimulation to excite or wake up the neurons that may have survived the patient’s injury. That strengthens those neurons, but the closed-loop system strengthens the entire network connection of neurons between the brain and spinal cord.

But while this is a successful proof-of-concept experiment, work on creating a brain-computer interface suitable for humans is far from complete. The system used here is successful in allowing for broader muscle movements, like moving a leg to walk, but it would be less successful at allowing for more fine tuned movements like a small change in direction or enabling a person to balance. As research forges ahead, scientists will need both a better understanding of how these fine tuned movements work and how to trigger them with wireless devices.