This week's Newsweek proclaims that "Heaven Is Real"--a neurologist concludes it after a near-death experience. But how much do we know about those experiences? 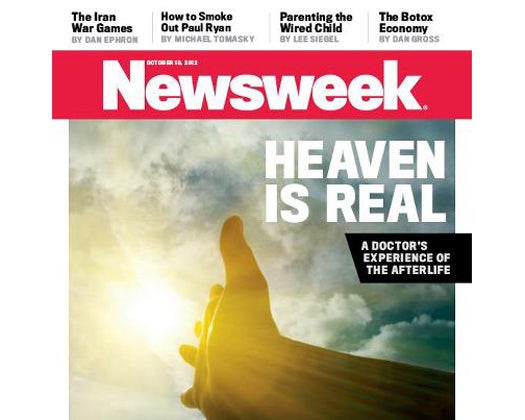 Newsweek slid head-first into controversy for its cover story this week. In “Heaven Is Real: A Doctor’s Experience With the Afterlife,” neurosurgeon Dr. Eben Alexander writes about falling into a coma, then having an experience that convinces him Heaven exists. He describes being in “a place of clouds” and seeing “shimmering beings”; a woman traveling with him offers him a message of hope and love. It’s one of the more public examples of a documented near-death experience, but it’s not anywhere close to the first: a Gallup poll approximated that 3 percent of Americans have reported one.

Some of the most common elements of a near-death experience include a feeling of peace or euphoria; a strange, nebulous feeling that they were “floating around the room” or having an out-of-body experience; seeing a tunnel with light at the end; or seeing family members or otherworldly phenomenon. But it’s also very difficult to measure or observe scientifically, despite being such a common and varied phenomenon, so it’s very hard to account for everything that happens during one.

There’s no consensus about what causes near-death experiences (or NDEs, as they’re sometimes known). Partially, that’s because it’s a vague, catch-all term. How “near” to death are we talking here? Near death for how long? Even the word “death” itself is kind of hard to pin down, especially when we’re bringing more people back from it than ever before. (The closest we’ve gotten to a reasonable definition is probably “no detectable vital signs that show the person to be living at all, physiologically or mentally,” but that’s been defined and redefined many times in the past.)

The NDE was first defined by psychologist and medical doctor Raymond Moody in 1975 as a feeling of epiphany in a person who would have died without medical attention. That’s still a little vague, since people can actually have near-death experiences without being in any real danger of dying–it’s been shown that simply the fear of it is enough. Later, Bruce Grayson’s NDE scale tried to gauge the effect: It asks a series of questions about what the person felt and experienced during the event to determine the overall effect. That’s one of the biggest hurdles to overcome when trying to scientifically examine NDEs–we’re pretty much restricted to interviews of those who have experienced them.

Dr. Sam Parnia, a scientist and physician at Stony Brook University School of Medicine who’s studied NDEs, and author of the forthcoming Erasing Death: The Science That Is Rewiring the Boundaries Between Life and Death, says he prefers to study a completely different phenomenon: instead of near-death experiences, actual-death experiences.

Parnia looks at patients who have gone through cardiac arrest–symptomatically and objectively, there is no “measurable evidence” that can be used to show the person is alive–and are later resuscitated. Parnia’s team, in an ongoing experiment, set up special shelving in rooms in which people are resuscitated, holding randomly generated pictures on the ceiling at an angle that require an out of body experience–the person would have to be separate from the corporeal body to see the images. After patients are resuscitated, Parnia’s team surveys them on what they saw. We don’t have conclusions yet, but it’s a good example of the kind of awkward ways that we have to test such a nebulous, difficult-to-measure event.

But at this point, Parnia’s not completely satisfied with any of the most-noted explanations for NDEs. We only have a few parts of the story–the symptoms, almost, rather than the actual cause. True, he says, almost every individual element of an NDE can be explained with chemical or physical reactions we understand, but those single explanations don’t tell us why the phenomenon happens in the first place. Take euphoria, for example: “All sorts of things could lead to the feeling of happiness,” he says, but it’s difficult to pin down with certainty what the chemical process is that’s causing it. There’s probably, he says, some fundamental trigger we haven’t yet discovered that’s the root cause of an NDE.

Dr. Kevin Nelson, a researcher who’s studied near-death experiences extensively, and authored The Spiritual Doorway in the Brain, mostly agrees with Parnia, but seems less concerned about finding a root cause of NDEs–he’s pretty comfortable with all those individual explanations for the individual experiences that make up the category of NDE. He does say that some of these multitude of factors can be said to matter more than others, even if we don’t know all of the contributors that cause the total phenomenon. So what are those factors?

“One of the most common causes of near-death experiences is fainting,” Nelson says. This makes it a good example of when near-death experiences can happen when the person experiencing the NDE is in fact nowhere near death. Researchers have shown that a loss of oxygen flow to the eye will cause tunnel vision. Oxygen deprivation–and even just a sense of fear–can cause the oxygen to stop flowing, and both of those are symptomatic of dying. In Nelson’s research, simply fainting was enough to cause several of the effects related to near-death experiences, like a feeling of being out of your own body, or a sense of euphoria.

A surge of steroids, epinephrine, and adrenaline are released in the body during situations where it’s near death, Parnia points out. It could explain the feeling of euphoria, and some of the stranger, hallucinatory effects. It’s been suggested that Ketamine, which is released when animals are under attack, could produce similar effects. One of the first theories on near-death experiences, in fact, was that the psychedelic Dimethyltryptamine, or DMT, was released in the brain as soon as it realized it was dying, but that’s somewhat speculative: The only way to really test something like that, Nelson says, is to give someone the drug and compare its effects to near-death experiences. Chemicals could very well be be a factor; it’s just not an easily proven one, compared to, say, fainting and blood loss.

IT’S A FORM OF REM SLEEP

REM sleep is the type of sleep most closely associated with dreams. Nelson has proposed that, close to death, we enter a type of REM sleep. Put simply, he says, the brain is still functioning enough to realize that it’s in danger, despite being asleep. That creates a sort of sleep-state that’s spiked with a fight-or-flight response: a form of lucid dreaming, where we’re still aware of the situation but are not completely conscious. The sensation of floating around yourself–an out-of-body experience–is consistent with lucid dreamers.

This is only one symptom of near-death experiences, but it’s a common one: People report experiencing memories of loved ones or other moments from their past. Research has shown, Nelson says, that our sense of memory kicks in during threatening situations, like being near death. In the more lizard-y parts of our brains, Nelson says, long-term memory and fight or flight are connected, which might be part of the reason people say they remember near-death events so vividly. That phenomenon of near-death experiences might be related, causing the my-life-flashed-before-my-eyes effect or other memories cropping up.

In short: There’s not exactly a consensus on what causes them, but the most common effects associated with near-death experiences have been reproduced in some way, and solutions have been offered to their most fundamental causes. But whatever the cause, people coming out of them can feel profoundly changed, even if they don’t wind up on the cover of Newsweek.