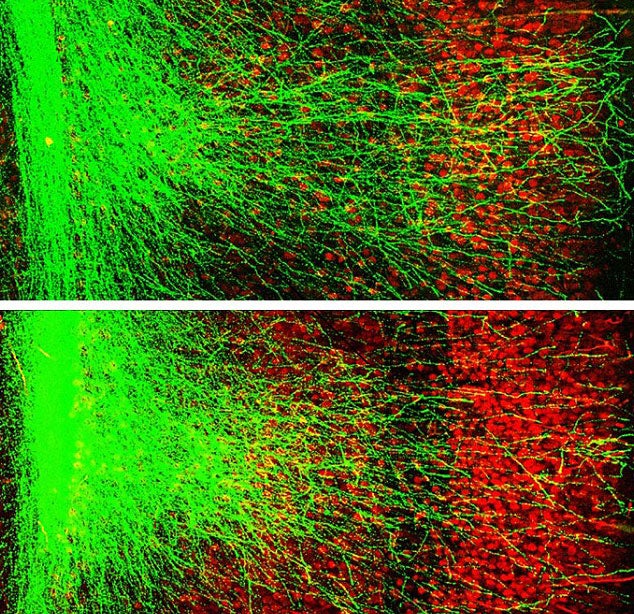 Schizophrenia, a disorder that affects more than 21 million people worldwide, has a complex set of symptoms and manifestations but among them, damage to memory is a key and difficult to treat component. For decades, scientists have known where in the brain the problems lie, but not the underlying cause or how to fix it. But researchers at Columbia’s Zuckerman Institute have unearthed a potential treatment for the disease’s toll on memory: A drug that disrupts a tiny genetic mutation that makes communication within the brain less efficient.

The Columbia team, who published this work in Neuron today, successfuly used the drug to prevent neural damage in mice with the mutation.

“With this paper and our previous work we can trace a pathway that leads from gene to behavior, and that’s really a first,” said Joshua Gordon, an author of the paper.

In afflicted individuals, this mutation thwarts the development of neurons that connect two parts of the brain together, the prefrontal cortex and the hippocampus, while the brain is forming. These parts help govern memory, and the team’s previous research last year found that this mutation can result in impaired memory in models of schizophrenic brains.

Their new work focuses on repairing this by stopping a certain protein (caused by the genetic mutation) from interfering with brain development. Co-author Joseph Gogos says that this protein, called GSK3B, was essentially “clogging the brain” as it was trying to form.

Without the “clogging” protein, the neurons of the brain are free to form as they normally would, restoring complete function to the brain. However, this needs to be done early in brain development. Researchers tested the protein inhibiting drug on mice between seven and 28 days after they were born–when the brain is still developing and is inhibited by the clogging agent.

After, scientists tested the mice’s memory by inserting thin wires into the prefrontal cortexes and hippocampi of their brains, according to Gordon. Then, they used those wires to measure the independent electric signals of both parts of the brain. In mice that have the mutation, these electric signals fluctuate independently, while in a healthy brain they move in unison. By monitoring these in healthy mice, mice with the mutation, and “cured” mice, researchers were able to discern that the treatment improved performance in certain tasks by 89 percent.

The Columbia team is now working to see other potential effects of the drug for those without the genetic mutation, and hopes to see how the model stacks up at similar developmental ages in human use.