MEGAPIXELS: This geometric iceberg will soothe your soul

It doesn’t even look real. 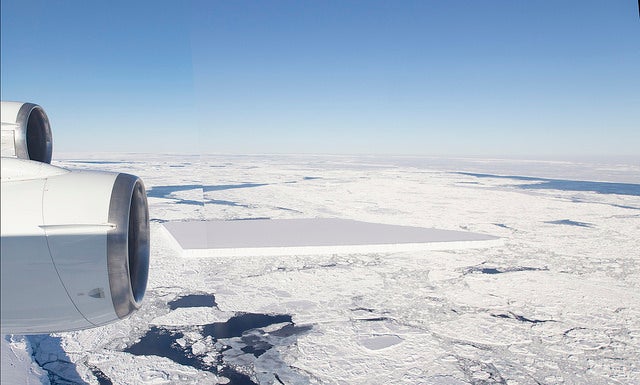 It looks like a quick photoshop job. Or the work of a secret Antarctic civilization that worshipped right angles. But this rectangular iceberg is one hundred percent natural.

Okay so it’s not a perfect rectangle, but this floating ice sheet gets unsettlingly close. NASA scientists spotted the geometric beauty just off the northern Antarctic peninsula when surveying the region earlier this month as part of Operation IceBridge, the agency’s longest-running polar ice survey initiative.

“I thought it was pretty interesting; I often see icebergs with relatively straight edges, but I’ve not really seen one before with two corners at such right angles like this one had,” IceBridge scientist Jeremy Harbeck said in a NASA statement.

With its steep sides and flat top, this iceberg is what’s known as a tabular iceberg. NASA has not released official measurements, but Ted Scambos, senior research scientist at the University of Colorado Boulder told National Geographic he estimates the slab is 130 feet tall and a mile wide or more.

From yesterday's #IceBridge flight: A tabular iceberg can be seen on the right, floating among sea ice just off of the Larsen C ice shelf. The iceberg's sharp angles and flat surface indicate that it probably recently calved from the ice shelf. pic.twitter.com/XhgTrf642Z

The satisfying sharp angles and flat surface probably mean the rectangle calved off the Larsen C ice sheet fairly recently, NASA tweeted. Larsen C is a 20,000-square-mile floating sheet of ice anchored to the Antarctic landmass. In the background of some of the images Harbeck snapped from the plane, you can make out the infamous Delaware-sized iceberg that calved off Larsen C in July 2017.

While it looks pretty, this iceberg has a dark side. Experts worry the large iceberg is another sign of how global temperature rise threatens the future of the ice shelf. Because this ice rests on land, when it breaks off or melts into the ocean it actually adds more water, incrementally raising sea levels.