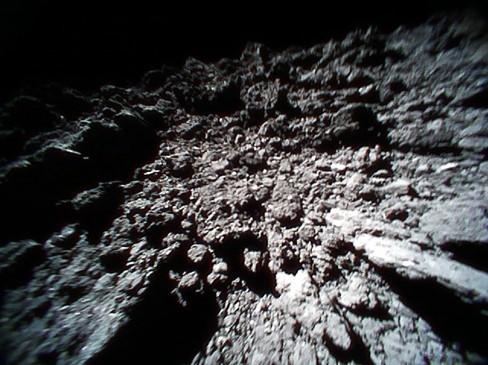 A new photo of the surface of Ryugu taken by one of Hayabusa-2's rovers. JAXA
SHARE

In 15 frames, the bright flare of the sun moves across a pitch-black sky, arcing above a rocky, boulder-strewn surface.

It was taken by Rover 1-B, one of two Japanese rovers currently hopping around on the surface of the asteroid Ryugu. The duo detached from the Hayabusa-2 spacecraft last week and quickly began sending back mesmerizing images of the asteroid’s stony surface.

The solar-powered rovers are small, just seven inches across and less than three inches tall, but they contain cameras and temperature sensors to give astronomers back home their best look so far at a C-type (carbon-rich) asteroid. The bots move autonomously, activating an internal motor that sends them just high enough to glide about 50 feet in 15 minutes. The hopping mechanism is carefully calibrated—Ryugu’s low gravity means that a more powerful jump could send them soaring straight off into space.

The Hayabusa-2 mission is just getting started. In October, it’s expected to release a much larger lander, which will also be able to right itself on the surface. This Mobile Asteroid Surface Scout (MASCOT) will collect soil samples at two locations and analyze them.

Things will get even more exciting next spring. Hayabusa-2 is also carrying a small explosive that will blast a six-foot-wide crater in the surface. The researchers don’t just want to see the fireworks—the mission will get beneath Ryugu’s surface to give us a glimpse inside the asteroid.

Hayabusa-2 will return to Earth with samples in 2020. And luckily, it’s not the only asteroid-visiting robot currently floating around our solar system. Another mission, OSIRIS-REx is currently on the way to the asteroid Bennu, and will reach its destination later this year.