Swipe the air to pause. Wave to fly drone. 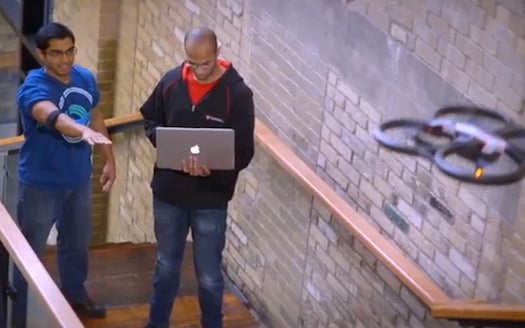 Most gesture-control systems require some kind of external sensors that “see” you, with optical sensors or depth sensors or cameras. They’re on the outside, measuring your movements the same way human eyes do. And that’s fine, but a new wristband advertises itself as a system that’s more _internal_–it’s directly controlled by you.

MYO, from Kitchener, Ontario-based startup Thalmic Labs, is a new gesture-control system that works a bit differently from the Kinect, Wii, or Leap. You make gestures similar to the ones you’d use on an Apple trackpad, except in the air: you’d wave a couple fingers to rewind or pause a video, scroll through pages, that kind of thing. It’s compatible with Windows and Mac OS X to start, but since it connects via Bluetooth, it could conceivably connect to just about any mobile device as well: smartphones, tablets, or even drones.

This is how the creators explain it:

That muscle-sensing system seems like the really innovative part–sort of like an EEG control for your arm. If the wristband is sensitive enough to pick up on muscle activity and accurately distinguish between different movements, it’ll definitely be an interesting new entry to the gesture-control field (even if it’s just as a toy, for a little while).

Exactly how the wristband works is not totally clear; their website explains that it “is able to measure electrical activity in your muscles instantly,” then translate that to gesture controls, but offers few details on its inner workings. We’d like to know just a little more on how effective this is before dropping $150 to pre-order our wizard powers, but it definitely seems like a promising and interesting new tech.