Australian aeronautical firm Skylifter has come up with a better way to transport heavy equipment to remote areas that are... 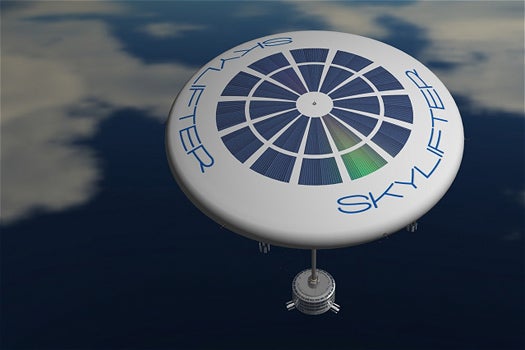 Australian aeronautical firm Skylifter has come up with a better way to transport heavy equipment to remote areas that are beyond the reach of railways, roads and runways – a flying saucer.

This 150 meter-wide disc shaped balloon would be capable of carrying 150 tons, an increase of 700 percent from the maximum 20 tons able to be lifted by existing heavy transport helicopters. Its design provides for more stability – with its flatter profile, it acts less like a sail, making it less susceptible to winds during flights of up to 1240 miles. The disc also behaves as a parachute during descent, ensuring a gentle landing, while the low-hanging control pod keeps it from being too top-heavy.

Skylifter has already built a miniature remote-control version of the disc, named Betty. At three meters across, Betty is capable of carrying slightly more than half a kilo, but her primary function is to show how the design functions. The firm plans to build a full-sized prototype of the balloon over the next three years. If all goes well, before long, Skylifter’s flying saucer could be delivering whole buildings to remote locations, or just acting as a flying hotel.