First time the record has been set with refueling stops 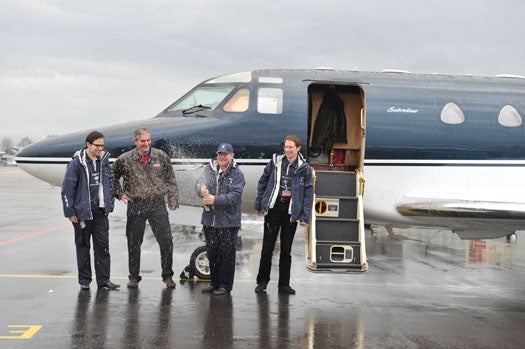 Piloting a plane older than two of the three crew on board, a Swiss team shattered Steve Fossett’s around-the-world flight record by almost ten hours over the weekend, the first time the record has been set in this weight class with refueling stops. But the pilots didn’t just have to negotiate the usual headwinds and bad weather — their flight was nearly derailed by a volcanic eruption in Iceland that forced them to make an extra refueling stop and add an unexpected 12th leg to their journey.

The Swiss team — helmed by Chief Pilot Riccardo Mortara — set out to beat not only Fossett’s non-stop circumnavigation time of 67 hours one minute, but also golf legend Arnold Palmer’s 1978 record of 57 hours 26 minutes which was set in a Learjet 36, a plane in a lighter weight class than Mortara’s Sabreliner 65.

After lifting off from Geneva, the team stopped to refuel in such places as Bahrain, Macau, Osaka, Anchorage and Las Vegas before lifting off from Montreal for Keflavik, Iceland. But halfway there — and four hours ahead of Palmer’s time — the crew learned of the volcanic eruption in Iceland that forced the closure of the nation’s airports.

Rather than risk being grounded in Iceland or limping on fumes all the way to Ireland, the crew decided to turn back for Goose Bay in Labrador, Canada. After refueling there, they continued to Ireland and on to Geneva via Marrakesh, completing the nearly 23,000 mile journey in 57 hours 54 minutes, a half hour slower than Palmer’s 1978 run.

Why did Mortara and company choose to break the record in a thirty-year-old plane? There doesn’t seem to be a real reason except that they had one and Mortara likes the way they fly. They’re not exactly the most fuel-efficient planes, though they are pretty swift (the crew averaged just over 400 miles per hour during the trip).

Whether or not the team will attempt a second journey sans rare geologic event is uncertain; in the meantime, the Sabreliner 65 returns to its day job as a luxury charter jet.