An obsessive photographer’s guide to the iPhone 8 Plus camera

It’s not a big shift in hardware, but Apple has done a lot to cure bad photos. 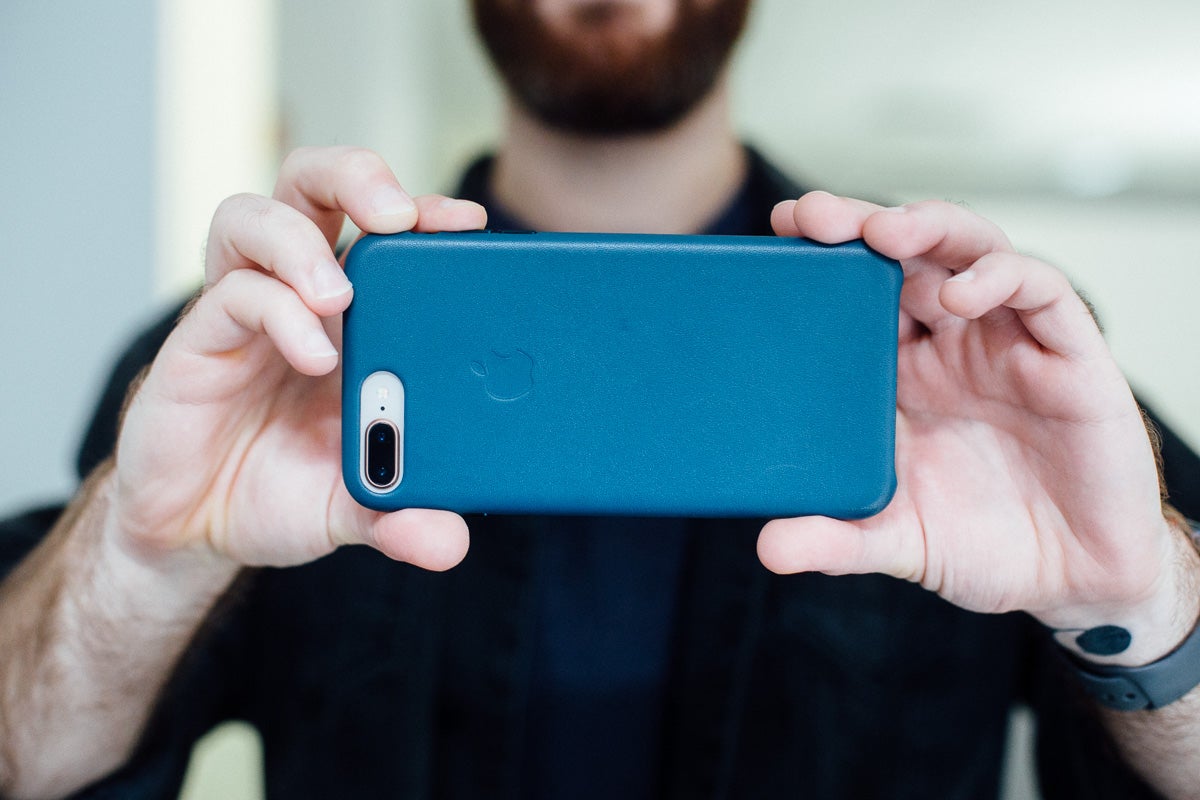 We have an abusive relationship with our smartphone cameras. We take them into dark bars, shoot them into blinding backlight at the beach, and refuse to wipe the pocket goo off their lenses. Then we blame the phone when our pictures don’t look great. It’s the equivalent of holding the phone upside-down, screaming into its earpiece, and then getting upset about sub-par sound quality.

As a photographer, I know how to find good light, but I can also hunt down truly dismal illumination. It’s in those dark places where I put the new iPhone 8 Plus camera to the test. The 8 Plus hardware isn’t much different from its predecessor (it still thrives when capturing brilliant sunsets and lively street scenes), but Apple has clearly done a lot of work on the backend to raise the floor on our worst photos and spit out a higher percentage of good-looking images.

It may seem crazy to start a review talking about a flash, but this, to me, is one of the single biggest improvements Apple has made. The flash hardware itself is still terrible; it’s not really a “flash” as much as it’s an LED flashlight that throws light at your subject. However, the iPhone 8 Plus now does a much better job balancing illumination from the flash with the ambient light in your environment.

Instead of a blown-out foreground with a mostly-black background, you now get a surprisingly balanced photo all the way across. Photographers call this slow-sync, because it involves using a longer shutter speed to let the ambient light make its way onto the sensor and match the artificial light from the flash. The technique makes a huge difference and upgrades the flash from something I would literally never use to something I might actually bust out from time to time in a dark place like a bar, a wedding, or even a school. Progress!

Apple has claimed that the imaging sensor in the main iPhone 8 camera is bigger (typically a larger sensor leads to better photos in low-light), but the company hasn’t shared the specific measurements. There is, however, a method of determining the relative sensor size by comparing the focal length of the lens (which we can see in the metadata attached to a photo) and the camera’s field of view. Doing so, in this case, suggests a very incremental change in sensor real estate.

As a result of the extra processing power, the 8 Plus can now capture 4K video at 60 frames per second, and 1080p video at 240 fps. The extra speed boost is also a key to a new AI-powered portrait mode that’s meant to emulate professional photo lighting, which hasn’t made its way down to the less-powerful iPhone 7 Plus, despite its similar camera setup.

There’s a company called DXO that assigns numerical grades to cameras of all varieties in order to convey their overall image quality. It tests using careful, consistent methods and wonderfully nerdy resolution charts and scenes that evaluate what a camera sensor is truly capable of under controlled conditions. Camera nerds, brand acolytes, and marketing departments love it, but these overall scores paint an incomplete picture when it comes to how humans actually use a camera. I took a more practical approach, bringing the camera into tough photographic situations, and found some noticeable improvements over the iPhone 7 Plus.

A big functional shift is how HDR works in the standard camera app. The High-Dynamic Range mode is now the default; the feature combines image data from more than one capture to prevent highlights from blowing out and shadows from losing too much detail to darkness. This is really noticeable in high-contrast situations like shooting in the noon sun, which is typically a nightmare for maintaining detail in both shadows and highlights. Personally, i find the effect too pronounced at times, making things look reminiscent of a high-end video game, but it produces a very consistent look that’s typically a closer match to what we see with our eyeballs.

Image quality in low-light has always been a challenge for smartphone cameras because of their small sensors, but the iPhone 8 Plus has made some minor gains in this arena over the 7 Plus. It’s most notable when you zoom in to 100% and analyze the images on a pixel-by-pixel basis. You’ll notice the improvement if you’re making big prints or inspecting your files closely in editing software. Images that are exported and shared on Facebook or Instagram, however, won’t demonstrate a remarkable difference.

When it comes to color accuracy, things get kind of complicated. The iPhone 8 Plus uses the True Tone display, which has been ported over from the iPad Pro and changes the color balance of the screen according to the ambient light in your environment. So, when you’re shooting, the color of a red apple might look different under the shade of a barn than it does out in the sunshine.

True Tone clashes with advanced photo apps that allow for manual control over a photo’s color balance. Using your eyes to calibrate a photo for correct color is tricky when the screen changes color. For the average shooter, this is an enhancement, but if you want control over your images, it’s something to navigate around.

One thing I have always hated about the iPhone camera is the way it handles lens flare. When a strong light hits the lens—especially near the edges—it can bounce around the glass elements and create interesting picture effects like colorful artifacts or a dreamy haze. Some photographers try to avoid it, while other—hipsters, J.J. Abrams, me, etc.—utilize it as a creative tool. The iPhone 8 Plus makes a clear improvement here. It’s easier to get true, semi-attractive flare without streaks of light shooting across the frame and ruining the image, like the iPhone 7 Plus. The 8 Plus also lacks the ugly purple haze that sometimes happened in earlier models.

The iPhone 7 Plus introduced portrait mode, which made pictures of people more appealing on a smartphone camera. It leveraged a telephoto lens to cut down on the unflattering wide-angle distortion of the main camera, and it added a fake blur effect that, for better or worse, could sometimes trick viewers into thinking a portrait was shot on a fancier camera. The iPhone 8 Plus still does all of this.

For the most part, Portrait Mode worked. The fake blur was passable if you didn’t look too closely at often-jagged edges of your subject, and the longer lens didn’t require you to get uncomfortably close for a headshot. But it had serious usability drawbacks and the iPhone 8 Plus doesn’t really fix most of the annoying things about Portrait mode, but instead, added a new AI-driven lighting mode.

The iPhone 8 Plus’s telephoto “portrait” camera still doesn’t have optical image stabilization. Combined with a lens that still maxes out at an f/2.8 aperture, it’s easy to shoot a blurry picture in Portrait Mode unless you’re shooting in bright, even light. The image quality also gets extremely noisy (ugly speckles that muddy up your image), when light gets low. You can sometimes convert to black-and-white and call it “grain,” but that’s only going to fool so many folks.

I find the actual Portrait Lighting effects cheesy. Using most of the modes involves moving overly harsh highlights around the face to try and give an image shape where it didn’t otherwise exist. I don’t even think the examples Apple uses in its own commercial look particularly appealing. All the Lighting modes are a gimmicks right now, especially the Theater Lighting mode, which blacks out the background surrounding the subject and punches up the contrast. It’s also worth noting that processing a Portrait Lighting shot takes roughly two seconds, which is much longer than the nearly instantaneous nature of a normal shot. Presumably it takes a lot of processing power, which is why it didn’t make its way to the iPhone 7 Plus—so don’t expect too many tries at a single portrait.

The Portrait Lighting effect exists in part thanks to the switch over to the HEIF photo format, which replaces JPEG with a format that can include multiple images in a single file. Because Apple can now easily attach metadata, such as its editing history or applied effects, to each image, it can save the original file and enable things like Portrait Lighting Mode, or even the fake blur of the regular Portrait Mode later. It’s nice to have the option if you don’t want to be locked into one look with a photo forever. This is something photographers who shoot in raw have been doing for a long time, but now the advantages are extended to snap shooters.

More resolution and more frames per second aren’t always improvements when it comes to video capture, but 4K video at 60 fps does look rather impressive, and shooting full HD at 8x slow-motion is undeniably fun, especially with amusing subjects like the tongue of a goat. Again, the new high-efficiency file format for video should make that footage take up less space in your device.

Right now, the iPhone 8 Plus is the best all-around smartphone camera, but it likely won’t be that way for long. The looming iPhone X promises some enhancements, like an optically stabilized portrait lens and horizontally oriented cameras that are optimized for augmented reality, from which the iPhone 8 Plus could have benefitted.

The Google Pixel 2 is also right around the corner, and the original had an extremely impressive wide-angle camera built-in. But, even if those cameras do edge out the iPhone 8 Plus in overall performance, I don’t expect the gap to be a wide one—certainly not wide enough to base an entire buying decision on it. Even if you’re a bad photographer, the iPhone 8 Plus will help make your Instagram feed nicer to scroll through.