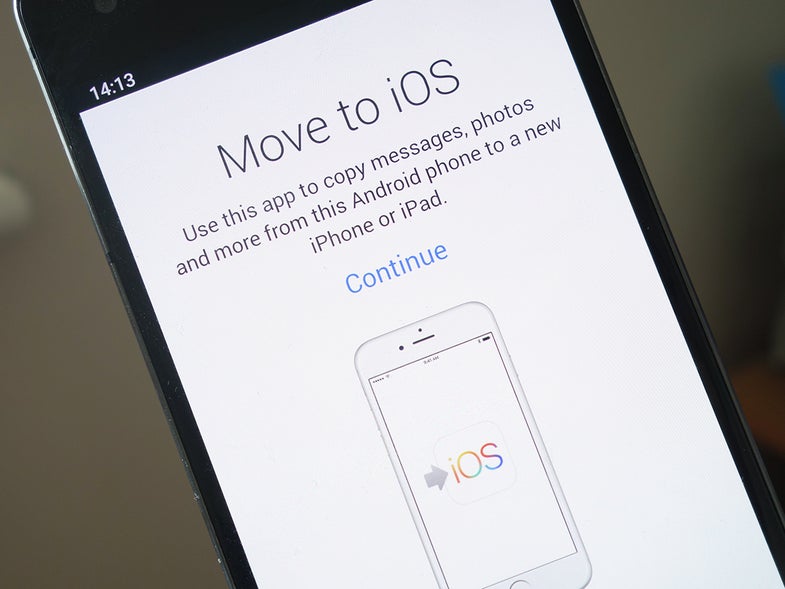 When the time comes to switch phones, you need to bring your data with you. But this is particularly difficult if you’re switching from iOS to Android—or vice versa.

If you’re an Android user gearing up to buy your first iPhone, you can still preserve your apps and data. It just takes a little more work. Here’s how to transfer your emails, contacts, calendars, movies, music and everything else you’ll want to put on your new phone.

Do you plan to keep using Google or Microsoft apps?

Your data-shifting process will depend on whether you plan to start using Apple’s apps or to stick to the Google and Microsoft services you already rely on. If you want to go all-in on Apple, then skip to the next section to learn how to move your data. However, if you plan to keep on using the same Google apps that you had on your Android device, then your move to iOS will actually be very straightforward.

That’s because all of Google’s main apps—Gmail, Google Maps, Google Calendar, Google Drive, and so on—are also available on iOS. Simply power up your new iPhone, install those services from the App Store, and sign in with your existing account. You can even get Google Assistant on your iPhone, though it isn’t as deeply integrated as it is on Android. This means you do things like belting out, “Hey Google” to activate it when your iPhone is locked. Other than that though, you’ll be able to pick up right where you left off.

The same applies if you’re heavily invested in the Microsoft ecosystem. Apps such as Outlook, OneNote, Word, Excel, and OneDrive all have iOS versions, so you can easily jump between devices.

When it comes to emails, contacts, and calendars, you don’t need to stick to your Android apps to have access to your files. Instead, you can leave your data on the Google or Microsoft servers, but interact with it via the native iPhone apps. On your new iPhone, go to Settings > Passwords & Accounts > Add Account. Choose either Google or Outlook.com (for Microsoft), then fill out your credentials. Now you can sync your original emails, contacts, and calendars to your new device’s apps. You can manage the settings through that same Settings > Password & Accounts screen.

Try the Move to iOS tool

In its eagerness to get users to switch platforms, Apple has made a special Android app to help. This Move to iOS tool is the easiest way to transfer pictures, videos, text messages, Google contacts, and Google calendars to your new iPhone. It makes the process easy and seamless, and we recommend you try it before turning to any other options.

For this to work, you need to do it as soon as you boot up your new iPhone, while you’re still beginning to set it up. To start, grab your old Android device, install the app, connect to a Wi-Fi network, and plug the phone into a power outlet.

Plug your new iPhone into its own power source, turn it on, and start setting it up. During this process, connect it to the same Wi-Fi network as your old device. When you reach the Apps & Data screen, choose Move Data from Android, then Continue. A code will appear on the display.

At this point, turn back to your Android phone and open the Move to iOS app. When prompted, enter the code from your iPhone screen. Pick the types of content you want to move, tap Next, and then get ready to wait a little while. A loading bar should appear on the screen of your iOS device—let it finish before touching either phone.

After the transfer completes, you’ll find your text messages in the Apple Messages app, your email accounts in the Apple Mail app, your photos and videos in the Apple Photos app, and so on. The tool also gives you the option to download the iOS versions of any third-party apps you had on your Android phone. However, it only works for free apps that are available on both platforms, and once you’ve downloaded them, you’ll have to sign in or otherwise configure them yourself.

What if you miss the window to use Move to iOS? Read on for more ways to transfer your precious data.

You can easily bring independent apps like Spotify and Netflix with you when you make the switch from Android to iOS. Just install the relevant app on your new device, sign into your account, and away you go. In fact, you can find most Android apps for streaming music, movies, and television on iOS as well. Examples include Google Play Music, YouTube Music, Google Play Movies & TV, Plex, Hulu, and Amazon Prime Video.

However, if you want to start streaming your media through Apple’s own iTunes, you might hit a snag. This app will not let you play movies and TV shows that you’ve purchased through Google. So if you want to stream these files, you’ll have to do so through the iOS version of Google Play Movies & TV. The situation differs slightly for your MP3 files: As long as they don’t carry DRM protection locking them to specific devices, you can import them to iTunes through your computer. Sign into iTunes on a Windows or macOS machine, go to File > Add File/Folder to Library, and select your stored MP3s. Then sign into the mobile version of iTunes, and the files will sync to your iPhone.

Of course, you can always start purchasing new music and videos through iTunes, and ignore your old content. But bear in mind that, if you do ever decide to go back to Android, your iTunes movies and TV shows won’t be able return with you. You’ll only be able to keep your music, which can move via the Android version of the Apple Music app.

Move documents and other files

Because most media lives in the cloud, you can access your data as soon as you log into the relevant app, whether that software lives on an Android or iOS device. So to transfer documents and other stray files, you can use similarly platform-spanning apps like Dropbox and Google Drive.

On your old device, move your files to one of these apps. Then grab your iPhone, download the iOS versions of Dropbox or Google Drive, sign in, and you’ll find all the same files waiting for you. You can also access your cloud storage through iOS’s native Files app: Open the app, tap Edit, and enable Dropbox or Google Drive (these apps should automatically appear once you’ve installed them on your iPhone).

Speaking of syncing, the built-in iCloud makes it easy to access computer files from your iPhone. On a macOS machine, open System Preferences > iCloud, look next to iCloud Drive, and click Options to set which items you want to add to the cloud. On Windows, install the iCloud for Windows client, open File Explorer, and copy the relevant files or folders into the new iCloud Drive entry. Once you’ve moved your computer files to iCloud Drive, you’ll be able to open them through the Files app on your iPhone.