An iPhone 7 Headphone Jack Case Could Be On The Way 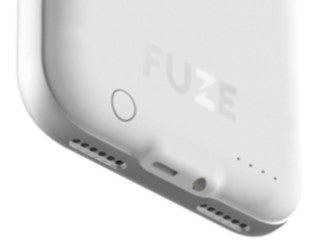 Earlier this month Apple waged war on the headphone jack when it released the iPhone 7. As the company’s flagship product, the iPhone 7 hints at what’s to come to the rest of the smartphone lineup, and potentially even other Apple products. To alleviate the change, Apple has included in the iPhone 7 package a Lightning port-to-headphone jack adapter, and a pair of earbuds that plug into the charging port. Though for those that love their headphones, a small dongle that can be easily misplaced, may not be the answer. However, the Fuze case could provide a better option.

Actual Innovation, the company making the Fuze case, allows it to plug right into your iPhone 7 to offer extended battery life, much like what you’d find from Mophie, or Apple’s own battery case. The difference lies in the bottom of the Fuze case. A Lightning charging port can be found on the outside of the case, as well as a 3.5mm headphone jack. The Fuze case isn’t the first accessory to split charging from listening to audio. Apple’s iPhone 7 Lightning dock offers inputs for both a charging cable and a 3.5mm headphone jack–which means we could see more case manufacturers do the same.

Fuze could be the first of many iPhone 7 cases to cleverly split audio and charging. The benefits of which are obvious: being able to charge the device and listen to audio at the same time is a feature that’s sorely lacking from the current iPhone 7 offering. The Fuze case also creates one less reason to cart along, and potentially lose, the included headphone adapter dongle.

Current Mophie cases and other battery options fit for older iPhones offer a cutout for the headphone jack. But we could see more charging cases, which already plug into the iPhone’s charging slot, offer a proper headphone jack built right in. Until then, users will have to rely on this crowdfunding campaign to save their inner-audiophile.

While no price has been announced for the Fuze case, those who pledge $59 can guarantee themselves a case when shipments start in December. Pledging $89 will get you two cases, $249 for four cases, etc. With fundraising ending in a month, we’ll know soon whether the first prominent headphone jack-supporting case will be provided by Actual Innovation.