Building on the success of the X3 demonstrator, its Racer boasts a 248 mph cruise speed. 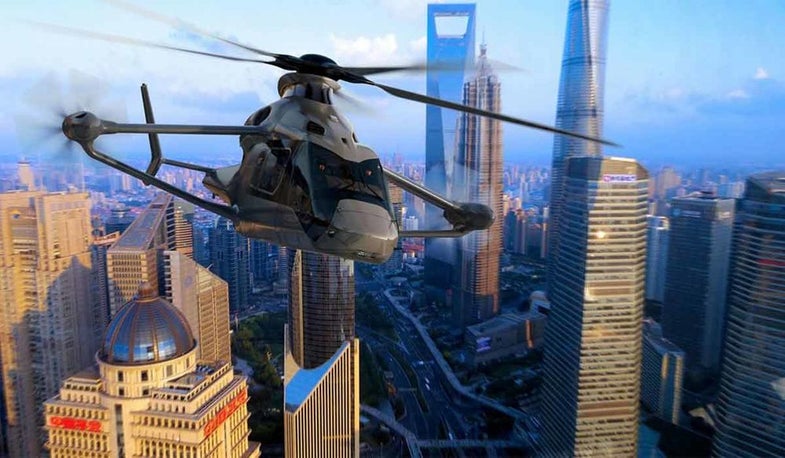 This story originally appeared on flyingmag.com.

Airbus Helicopters unveiled a model of the high-speed demonstrator it is developing as part of the Clean Sky 2 European research program at the Paris Air Show.

“Today we unveil our bold vision for the future of high-speed rotorcraft,” Airbus Helicopters CEO Guillaume Faury said in a press release. “This new project, pulling together the skills and know-how of dozens of European partners through the Clean Sky 2 initiative, aims to bring increased speed and range at the right cost, thanks to a simple, safe and proven aerodynamic formula. It will pave the way for new time-sensitive services for 2030 and beyond, setting new benchmarks for high-speed helicopter transportation.”

Named Racer, for Rapid and Cost-Effective Rotorcraft, it should certainly live up to its name with a projected cruise speed of approximately 248 mph. Overall, it looks to achieve “the best trade-off between speed, cost-efficiency, sustainability and mission performance.”

RELATED: Is a winged Volvo in our future?

Its “box-wing” design is optimized for aerodynamic efficiency and “will provide lift in cruise mode while isolating passengers during ground operations from the ‘pusher’ lateral rotors designed to generate thrust in forward flight.”

These lateral rotors, as well as the main rotor, will be driven by two RTM322 engines. The Racer demonstrator will also feature a hybrid metallic-composite airframe, specifically designed for low weight and low recurring costs.

Building on the X3’s success using a combination of a traditional main rotor and innovative lateral rotors, the Racer project will look to widen the spectrum of usability with increased speed and efficiency, “especially the case for emergency medical services and search and rescue operations, as well as for public services, commercial air transport and private and business aviation.”

Initial assembly of the first demonstrators is expected to start in 2019, with test flights the following year, which bodes well for Airbus, which announced $39.7 billion worth of new business during the 2017 Paris Air Show.