The Return of the Blimp 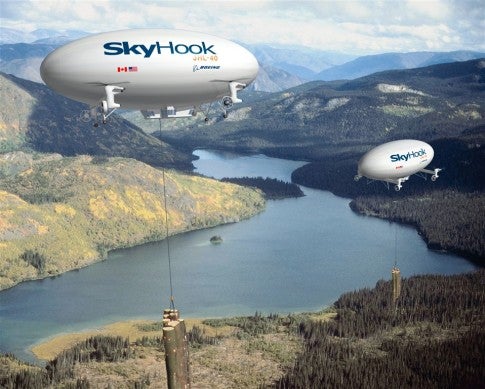 Mammoth-sized blimps may work well as advertising tools, but soon they could be doing a lot more work than that. Aerospace and defense corporation Boeing and Canadian company SkyHook International are working together to create a 302-foot-long airship with rotors that can haul heavy loads—double the capacity of the biggest helicopter—across remote regions at a lower fuel and environmental cost.

Named the Jess Heavy Lifter 40 (JHL-40) after its inventor, SkyHook’s Peter Jess, the buoyant airship has a helium-filled envelope that will be enough to support its own weight, including fuel. This leaves its four rotors to provide enough power to carry a 40-ton external load for 200 miles without refueling—a bonus in harsh, isolated areas like the Canadian Arctic or Alaska.

A hybrid blimp rotorcraft or “helicraft” is not a new concept at all, and, in fact, there have been many dead-end endeavors, like the Piasecki Heli-Stat in the 1980s. The timing might be just right, though, for the JHL-40, considering rising fuel costs and numerous eco-friendly initiatives. Boeing, in charge of development and building, and SkyHook, in charge of maintenance, operations and servicing, anticipate having the airship commercially ready by 2012.