Remembering The Great War: The Outbreak

100 years ago, Popular Science marked the start of WWI with a collection of anti-war essays. 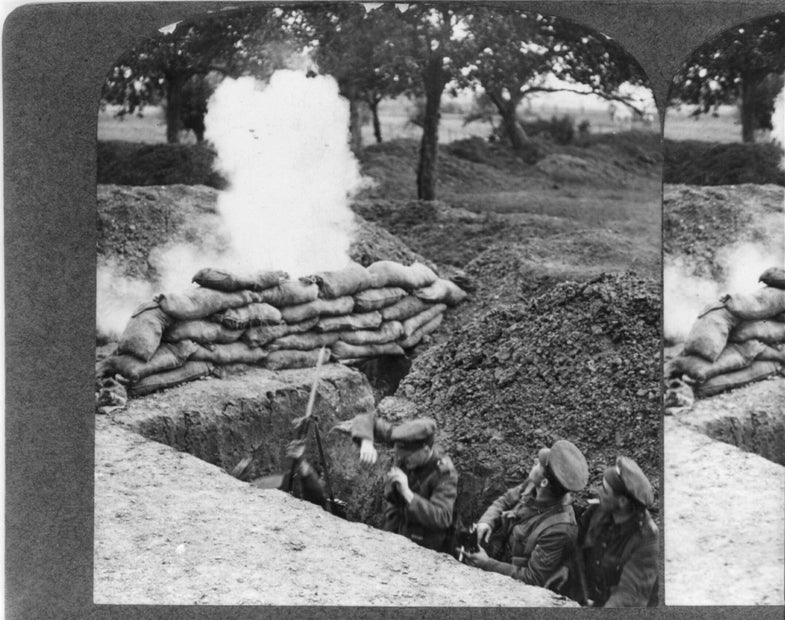 This year marks the centennial of the start of the First World War. To honor it, Popular Science_ is combing through our archives to bring you the best of our original war coverage–from the emergence of tanks, airplanes, and other military tech, to essays examining the relationship between war and eugenics. _

The first post in our “Remembering The Great War” series comes from the September 1914 issue of Popular Science, which is the first time the magazine discusses the war in Europe. In a series of essays, scientists probed various aspects of war, and came down strongly in favor of peace. “Everywhere the energies of men are diverted from scientific and social progress to destruction,” we wrote. Essay topics included the futility of war as a means of creating peace (by philanthropist Andrew Carnegie), the (im)morality of war (by philosopher William James), and even speculations that sending a nation’s fittest men to be slain in war could lead to the degeneration of society. The latter essay was authored by the noted ichthyologist, eugenicist, and peace activist David Starr Jordan, who wrote,

(For context: Eugenics, or the idea that societies could improve themselves by weeding out people who are genetically “less fit”, was a concept that was accepted by many scientists in the early 1900s. The idea later lost steam as scientists realized that harmful mutations are naturally introduced into the population all the time … and after forced sterilizations, euthanization, and mass murder made eugenics seem a lot less beneficent.)

The most compelling essay from the September 1914, excerpted below, was written by psychologist James McKeen Cattell (originally in 1912, and republished for this issue) and explores the relationship between war and science.

Science And The International Good Will

Science with its applications has been one of the principal factors leading to peace and international good will. Science, democracy and the limitation of warfare are the great achievements of modern civilization. They have advanced together almost continuously from the beginnings of the universities of Bologna, Paris and Oxford in the twelfth century to their great triumphs in the nineteenth century and the present promise of their complete supremacy. It may be urged reasonably that science is the true cause of democracy and that science and democracy together are the influences most conducive to permanent and universal peace.

The applications of science in industry, agriculture and commerce, in the prevention of disease and of premature death, have abolished the need of excessive manual labor. It long ago became unnecessary for the great majority of the people to be held in bondage in order that a few free citizens might have education and opportunity, and slavery has been gradually driven from the world. The vast progress of scientific discovery and invention in the nineteenth century has reduced to a moderate amount the daily labor required from each in order that all may be adequately fed, clothed and housed. The death-rate has been decreased to one half; the ensuing lower birth-rate has freed nearly half the time of women and reduced proportionately the labor of men. The period of childhood and youth may be devoted to universal education, and equality of opportunity can be given to all. It is no longer needful to depend on a privileged class to conduct the affairs of government and to supply men of performance. Those selected from all the people as most fit can be given the preparation and opportunity needed to enable them to become leaders, and every one can take an intelligent share in political affairs and in appreciation of the higher things of life.

Science is the true cause of democracy, and science and democracy together are the influences most conducive to permanent and universal peace.

In giving us democracy science has made its greatest contribution to the limitation of warfare. It must be admitted that a democratic people may be inflamed into a mob mad for war; but this is not likely to happen in the case of a war of policy or of aggression. In the past wars have been more often due to the ambitions, difficulties and intrigues of kings and princes than to the passions of the people, and the decrease of wars has been largely a result of the establishment of constitutional governments and of the legalization of the methods of conscription and taxation. If a declaration of war or an ultimatum leading to war were subject to a referendum, the vote being taken not too promptly, and if the estimated cost of the war were collected in taxes in advance, there would not be many wars.

We are still far from having a true political and social democracy. The production of wealth has increased rapidly; but we have not learned to distribute it justly or to use it wisely. The education supplied by our schools is inadequate and inept. We may be confident that a complete democracy will be the strongest force for peace that the world has seen. Even now the great mass of the people, most of them having some education and some property, are the true guarantees against wanton war. A king can no longer summon his nobles and the chiefs gather together their retainers to invade a foreign country. A war which, with’ its accompanying pestilence and famine, would reduce the population of a country to one half, as in the case of the thirty years’ war, is now almost inconceivable. And this we owe to social and political democracy, which in turn we owe to science.

As a result of scientific progress and invention, the law of Malthus has been reversed. The means of subsistence increase more rapidly than the population. The sinister voluntary limitation of childbirth, which may give rise to racial deterioration and actual depopulation, is unnecessary. As population increases under a given condition of culture, the number of men of genius and talent competent to make the labor of each more efficient increases in proportion; as their inventions are of benefit to all, the means of subsistence tend to increase as the square of the population. As the level of education and culture is raised, and as democracy is perfected, so that each is given opportunity to do the work for which he is fit, the wealth and means of subsistence increase still more rapidly. The law of Malthus and the law of diminishing returns, like the law of the degradation of energy, may ultimately prevail, but not in any future with which we are concerned. The population of a civilized country, in which science is cultivated, need not be limited by famine, pestilence or war. Over-population and the need of expansion by conquest are obviated by democracy and science; the cause of war which may be regarded as inevitable and legitimate is thus abolished. In providing adequately for the subsistence of an increasing population, science has made a contribution to peace the magnitude of which cannot be easily overstated.

Another great service for peace to be credited to science is the development of commerce, travel and intercommunication. Steam and electricity are handmaids of peace. Trade disputes and the misadventures of missionaries, travelers and immigrants may serve as causes or pretexts of wars, but the balance of commerce, travel and immigration is large on the side of peace. With the existing commerce among the nations, each dependent on every other, a war of any kind does injury to all. A nation at war destroys its own property throughout the world, and all the nations suffer. A neutral nation can no more afford to countenance a needless war than mobs burning its own cities and killing its own citizens. In New York, London, Berlin and Paris are business houses and representatives of every country in the world. How could any nation wish to destroy or to permit the destruction of these cities? . . .

Science has given us democracy, it has given us ample means of subsistence, it has given us commerce and intercommunication, and these three achievements are the principal factors which have lessened warfare and will eventually lead to its complete abolition. Other contributions of science, though less momentous, are by no means unimportant. Warfare is now in large measure applied science, and this tends towards its decrease. Wars between nations with scientific equipment and savage and barbarous peoples are no longer waged on equal terms and are of short duration. The extermination, despoliation and subjugation of the non-Caucasian races may be the world’s great tragedy, and in so far as some of these peoples are able to adopt our science there will be a readjustment which may be written in blood or may be a triumph of common sense and justice. However this may be, the invincibility that science has conferred on the western nations has made them safe from attack and invasion, and while it may on occasion have led to wanton aggression, it has, on the whole, limited warfare. If we call to mind the centuries of invasion and threats of invasion by North-men, Ottomans and Saracens, we can appreciate the value of the means of defense which science has given to the civilized nations.

The invincibility that science has conferred on the Western nations has made them safe from attack and invasion, and while it may on occasion have led to wanton aggression, it has, on the whole, limited warfare.

The making of warfare an applied science by the western nations and by one eastern nation has tended also to prevent war between nations so equipped. When war is a game of skill rather than of chance, it is likely to be’ undertaken only after careful consideration of the conditions and consequences. The cost is enormous and must be carefully weighed. The interests of the money lenders are usually on the side of peace and become increasingly so as war continues. If war does occur between two great nations it is likely to be of short duration. It can not drag on through tens of years as formerly. Its horrors are also reduced; non-combatants are not so much concerned, and soldiers suffer less from disease—far more dreadful than violence—owing to the shorter duration of wars and to hygiene, medicine and surgery. It may be hoped that science has accomplished, on the whole, more for defense than for aggression; torpedoes, mines, submarines and aeroplanes are more effective for protection than for attack. The cost of modern armaments is so immense that this in itself will lead to their limitation and to the settlement of difficulties otherwise than by appeal to arms.

There is a psychological aspect of modern scientific warfare, which tends to discredit it. The heroism and the bravery, the excitement of personal contact and the exhibition of personal prowess, the romance and the occasional chivalry, are largely gone. Men cooped up in battleships or displayed like pawns on the field are not much greater heroes to themselves or to others than workers in a mine exposed to nearly equal danger. Officers under constant instructions from the seat of government and telegraphing their orders from a point of safety fall to the level of ordinary men of affairs. Tin soldiers will not forever stir the imagination of children in the nursery. Providence is on the side favored by the money lenders and having the best organized commissariat. War becomes brutal and disgusting; at its best like the business of the hangman, at its worst like infanticide.