Burnout is real. Here’s how to spot it—and recover. 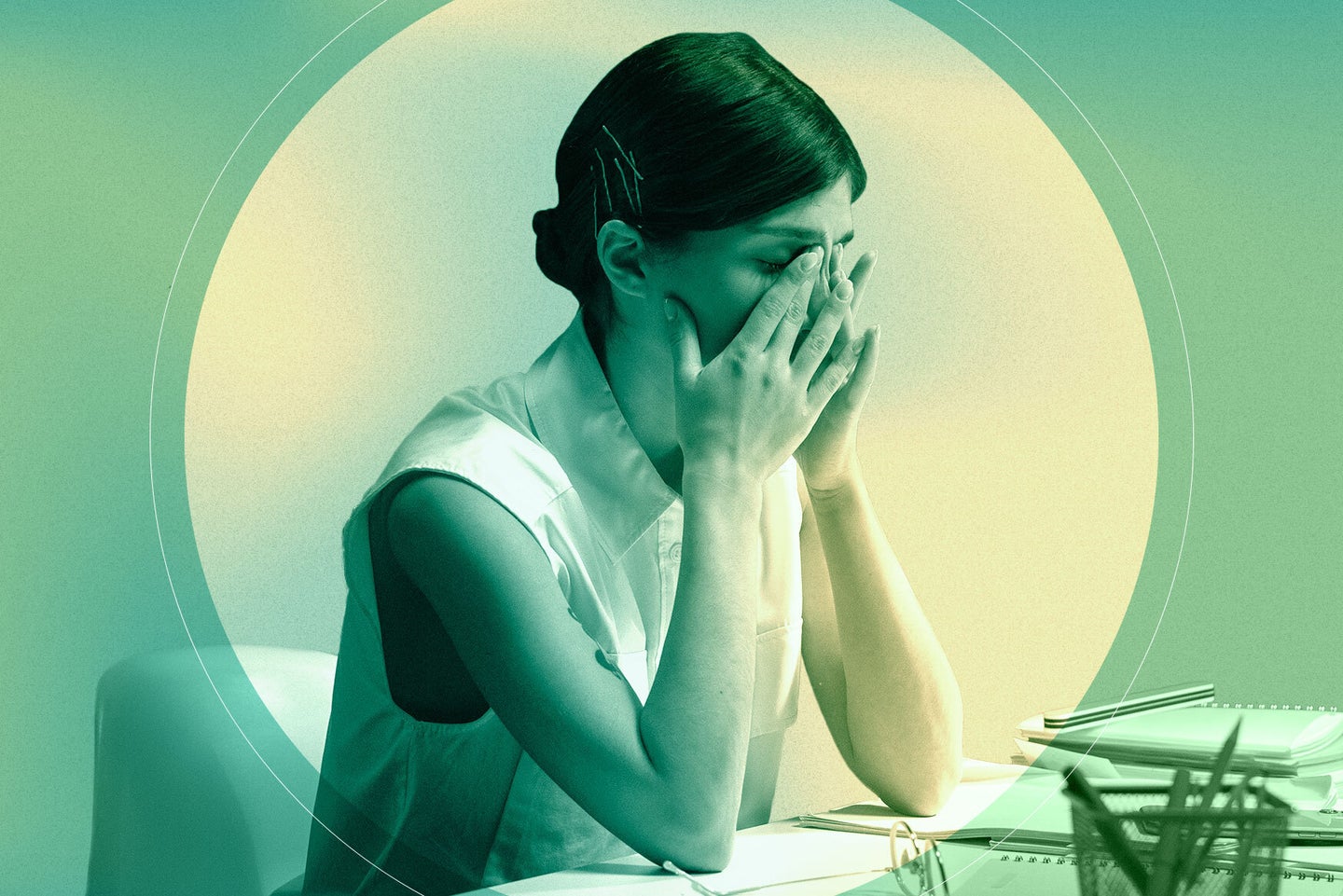 When people ask me why I became a writer, I have plenty of reasons to list: Words bring me joy. I ask questions constantly. And when I hear a good story, I’ll repeat it again and again until my friends get tired of hearing it. But in July of 2021, these responses started to feel hollow.

I was burned out.

“I feel like I sprained my brain,” I told my friend over the phone. When I wasn’t working, I felt fine; when I tried to use my head, it felt like putting weight on a bum ankle.

I know I’m not alone. At this moment, when work is isolating some people at home while putting others in danger, burnout seems particularly rampant. In a survey of 1,500 workers from Indeed in March 2021, 53 percent said they were burned out—up by nearly 10 percent from the previous year. Another survey of nearly 21,000 healthcare workers published in May in The Lancet found similar rates.

I wanted to regain my curiosity and the joy I find in language as soon as possible, so I reached out to scientists to find out what, exactly, was happening in my body—and what I could do to make it better.

Burnout is a phenomenon so old, they made a sin out of it, according to Gordon Parker, a professor of psychiatry at the University of New South Wales. Once called “acedia,” the eighth cardinal sin described a state of listlessness, apathy, and torpor observed in fourth century monks. “They would wake up one day and say ‘the sky is no longer blue,’” Parker said. These monks would stop getting pleasure out of life and would lose their faith in God.

They were more than just tired. They had forgotten the meaning of all that they did. And that pretty much describes burnout. The response to chronic stress goes beyond exhaustion; sufferers also experience a loss of idealism and feel like they’re bad at whatever they do. Those are the three prongs identified by the Maslach Burnout Inventory, the assessment most often used by psychologists to evaluate such mental fatigue.

And all that angst isn’t just in your head—it’s very much a physical phenomenon, rooted in the body’s stress-response system. Scientists studying the syndrome are particularly interested in the hypothalamic-pituitary-adrenal axis, also called the HPA axis. When we’re faced with a threat—say, a bear chasing us, or the prospect of responding to an ambiguously stern-sounding email—the HPA axis releases a hormone called cortisol. Cortisol helps the body run from whatever is threatening it; it raises our heart rate and helps our body harvest energy from glucose. Cortisol also decreases activity in systems you don’t need when your life is in immediate danger, like the reproductive and immune systems. When the hypothalamus, a structure in the brain that acts like the control room for the HPA axis, detects high levels of cortisol in the blood, it’s supposed to say “okay, my work is done here,” and shut the stress response down.

Researchers can capture a snapshot of how the stress-response system is functioning with a test called the dexamethasone challenge. Dexamethasone is a drug that tells the hypothalamus to suppress the stress-response system. Given a dose of it, a healthy person should start producing less cortisol. But multiple studies have found that people with burnout have an altered response to the drug. Some studies find that those individuals don’t react to dexamethasone much, if at all—they continue pumping out more cortisol regardless. Other research finds that people with burnout have an exaggerated response to the drug—they suppress cortisol more than the healthy controls do. Researchers hypothesize that these two seemingly contradictory findings represent two stages: burning out, and being burnt out.

“During the burning-out phase, the system is in overdrive,” Parker said. When stress is chronic, cortisol levels in the body keep going up, but the system doesn’t shut itself down. The burnt-out phase begins when that system is tapped out, says Renzo Bianchi, a psychologist at the University of Neuchâtel in Switzerland. “Your stress response gets so exhausted that you stop producing cortisol at high levels,” Bianchi said.

Cortisol may stress us out, but we also need the hormone to survive. It’s quite literally what gets us up in the morning. So when people enter this “burnt out” phase, they feel tired and cynical. They lose drive. They might even experience cognitive impairment and memory changes.

These symptoms might sound similar to clinical depression. But according to some scientists, including Christina Maslach of the Maslach Burnout Inventory, burnout and depression are not at all the same.

Burnout is a syndrome that may cause a person to become depressed; depression might predispose a person to burnout. But ultimately, burnout is distinct in that work is always at its root. People often feel better as soon as they’re able to get away from the cause of their stress, Parker said. That’s not usually the case with depression.

That distinction is important to make, because by treating burnout as an illness—like depression or an anxiety disorder—we risk offering the wrong solutions, Maslach said. You can’t self-care away your burnout, she added. It’s not so much about the individual as it is the situation they’re in. You have to remove the cause of your stress, and that often requires structural changes in the workplace.

That was disappointing for me to hear. When I reached out for expert advice, I’d already spent several of the preceding months focused on getting more sleep, running more often, and trying to take short vacations. All of these habits support good mental health, and might even offer short-term relief, Bianchi says—but they don’t get at the root cause of burnout. You can take all the time off you need, he says, but without identifying the root causes of your stress, you’ll eventually return to the same place.

[Related: Lessons learned in the world’s most stressful careers]

In scientific literature that investigates risk factors for burnout, six come up again and again, according to a review co-authored by Maslach and published in the 2016 book Stress: Cognition, Emotion, and Behavior. There’s workload, the amount of autonomy you have, and fairness in the workplace. Then there’s reward—how much your work is recognized and compensated—and workplace community, or the social support you receive from colleagues or clients. Finally, values and meaning: whether or not the work you’re doing syncs up with your ideals.

Employers have the power to prevent burnout by creating a fair and supportive workplace, Maslach says—one where people feel like they have autonomy and are able to cope with their workload. But people with burnout may need to troubleshoot which factors are negatively impacting them so they know how to take action on their own. For some people, Maslach says, curing burnout might necessitate moving organizations or switching fields entirely.

That wasn’t my route. Instead, I worked through Maslach’s six risk factors like a checklist. The more I thought about it, the more I came to believe that my work load itself wasn’t the main problem; instead, I realized that it had been a long time since I’d thought about what had initially excited me about journalism—talking to scientists, love for the craft of writing itself, the thrill of finding a new story—in other words, my values. I created spreadsheets of topics that intrigued me, scientists I loved speaking to, and projects I had long put on the back-burner. Then, I brainstormed ways to make time for them, blocking off chunks of time for tasks like going down internet rabbit holes in search of stories.

While I expected the answer to involve loads of rest, curing my own personal case of burnout turned out to be a lot of work. But it was worth it. Three months after starting this research, words excite me again. I’m back to annoying my friends with facts about frogs and physics. And several times a week, without fail, I spend an afternoon in the coffee shop around the corner to work on my personal creative projects.

Nine months ago, before my burnout began,I told a friend “I feel like I have the best job in the world.” By getting to the root of my stress, I’ve managed to get that feeling back again.