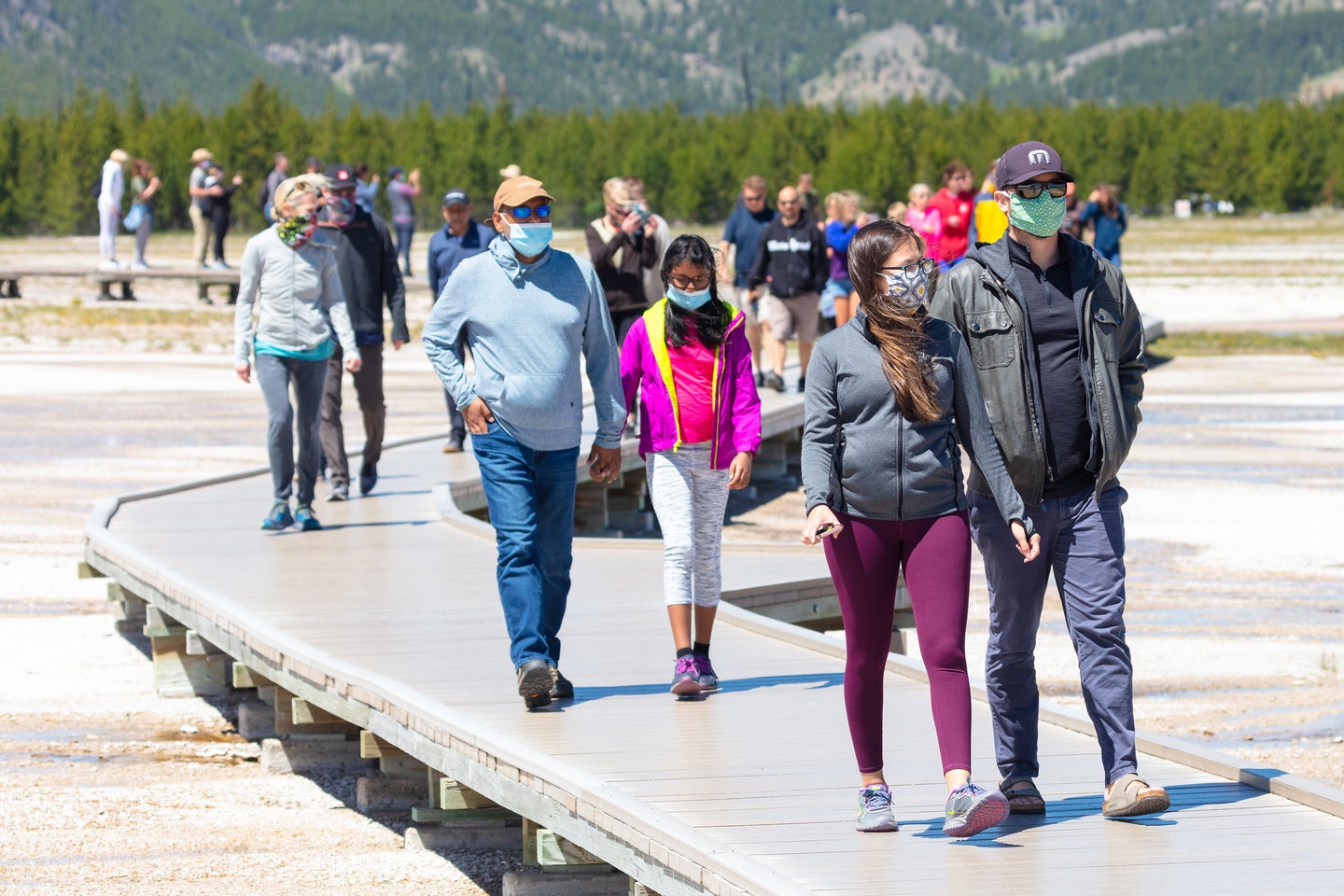 With many indoor activities on pause or otherwise inadvisable during the COVID-19 pandemic, more Americans have chosen to recreate outside.

Hiking, birdwatching, fishing and other outdoorsy pursuits are relatively safe virally speaking, and allow people to exercise and experience the mental health benefits that nature can provide. “It’s one of the few things people could do [during the pandemic],” says Ben Lawhon, the education director at Leave No Trace Center for Outdoor Ethics, an organization focused on reducing human impacts to outdoor areas. “That has just created this massive spike in public lands use since March.”

Local stats and indirect evidence (like outdoor gear purchases) suggest a spike nationwide. In recent months, public lands have seen record numbers of visits. Yellowstone National Park just had its busiest September on record, with more than 800,000 visits—a 21 percent increase from the previous September. Great Smoky Mountains National Park—already the country’s most-visited national park—logged more than 1.5 million visits in August, a nine percent jump from the same month last year. This trend also appears at the state level. Lawhon, who has been in touch with land managers around the country, says that Colorado state parks have seen their use increase 30 percent from last year and Kansas state park visits are up 50 percent. “From what I’m seeing and hearing, it is a nationwide trend,” he says.

In areas visited by rock climbers, visitation has increased by up to 300 percent, says Erik Murdock, policy director at the Access Fund, an organization focused on climbing access issues (the numbers include climbers and other users visiting the area). Some of those especially busy spots include the Chattanooga, Tennessee, area, parks outside Washington, D.C., and Los Angeles, as well as Colorado’s Front Range. With indoor gyms closed or reduced in capacity, it seems more climbers are taking their sport outdoors.

Reports of litter and overflowing trash bins on busy public lands have increased alongside the visitorship, says Lawhon. And the waste problem also extends to human poop. In August, The Seattle Times reported that rangers had to bury 200 turds and TP piles in one week in the Enchantments wilderness. Lawhon says the problem is not just improper waste practices by visitors, but overwhelmed agencies struggling to keep up while maintaining pandemic-safe levels of staffing and operations. Increased human numbers can also turn up noise levels, which can disturb wildlife, and wayward trampling that can squash sensitive plants.

The crowds can also affect the human-user experience. The psychological benefits of an awe-inspiring view may be harder to obtain if you’re having to squirm through a horde to catch a glimpse. Additionally, crowding can bring new hazards. In some places where parking lots have filled, drivers have instead parked alongside busy roads and put themselves at risk getting struck by a vehicle, says Lawhon. Even off the roads, pitfalls await. Murdock says that the Diamond rockwall in Rocky Mountain National Park saw it’s busiest season ever, and it’s possible that the increased use could lead climbers to choose a less-familiar route or skip safe practices in their haste.

Land managers and advocates like Lawhon are struggling to figure out how to reach new outdoor visitors. Previously, partnering with a popular outdoor website or retailer like REI might have worked to communicate with the public, but Lawhon says that without information on new users, education is more challenging. “We’re limited in our capacity to reach them, because we simply don’t know who they are yet.” In some states, his organization is working with transportation departments to use roadside electronic signage to remind people to pack out their trash.

Some top destinations responded to the pandemic by rolling out timed-entry reservation systems. Rocky Mountain and Yosemite national parks visitors must book a time slot online before their trip. The reason those parks were able to implement the systems so fast, though, was because they were already working on them prior to the pandemic, says Murdock. Although public lands are seeing a spike in visits right now, that’s against a larger backdrop of consistently increasing numbers.

Other parks might soon follow suit. The Red Rock Canyon conservation area outside Las Vegas in Nevada is implementing a timed-entry system, too, during it’s busy season between fall and spring. It’s meant to be permanent, rather than a response to the pandemic, says Murdock.

For visitors, Lawhon’s biggest piece of advice is to do research on their destination ahead of time. “I can’t stress how important it is right now to do some homework before you head out,” he says. “You can argue it’s more important now than ever.” If you don’t know the best practices at a given area, not only do you risk damaging resources, you can also expose yourself to danger. Some places have tailored best practice guides, like Yellowstone’s “pledge”, which instructs users to give wildlife room, stay on designated paths, and practice caution around water bodies.

Seasoned outdoor enthusiasts can do their part by sharing information on best practices in an empathetic way, add Murdock and Lawhon. “Think about helping others, rather than viewing new people as the problem,” says Lawhon. “Let’s make the outdoors more inclusive and welcoming.”

After all, the more people that experience public lands, the more personal interest there is in protecting those areas. “It’s not all doom and gloom,” says Lawhon. “When you get more people to understand the benefits of national parks or local parks or even city and neighborhood trails … this is all good in terms of having people who care about the outdoors.”