You really can be scared to death—here’s how

But don't freak out. 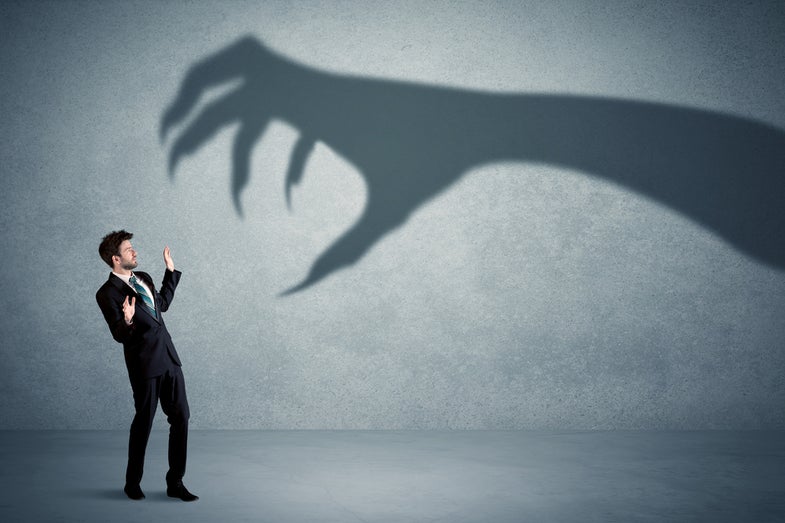 There are a million ways to die: Yeast infections run amok, working too much, an errant splinter, this season’s influenza, or even voracious mushrooms—we’ve all got to shuffle off this mortal coil somehow.

As Halloween rolls around once more, with goblins and ghouls lurking around every corner, the pre-deceased among us are left wondering: What about fright? Can it kill?

The answer is an emphatic “yes.”

Fear, once triggered, spreads far and wide in the human body. Up top, in our brains, the amygdala is responsible for registering frightful stimuli, and triggering a response in the nervous system. From there, the hypothalamus flushes the bloodstream with the stress hormones cortisol and adrenaline—remember that later. This causes your heart rate to rise and lungs to dilate, allowing more oxygen into the system. Organs that prove unnecessary in a life-or-death interaction, like the gastrointestinal system, shrink, pushing contents up or out. Every other resource is sent to the muscles, which you’ll need for a flight or fight response.

This chemical cascade has served us and our ancestors well for millions of years, kickstarting our escape from any number of dangerous situations. But there’s always the potential for too much of a good thing. That’s especially true for adrenaline—that incredible hormone, neurotransmitter, and pharmaceutical drug (it’s the main ingredient in an epi-pen). In excess, adrenaline can cause severe damage to the heart—deadly damage, even.

Adrenaline triggers a surge of calcium, which rushes into the chest cavity and stiffens the heart muscles, ensuring they stay taught until the threat has passed. But if there’s too much calcium or the body is overly-sensitive to its presence, the mineral can stop the heart from beating normally. Without a steady supply of blood, an individual may succumb to a ventricular fibrillation. On a heart monitor, these electrical pulses create wild, jumping lines, instead of the steady hum keeping us alive. Without emergency medical intervention like defibrillation (those pads that deliver a restorative electrical shock), this disturbance will cause blood pressure to drop into oblivion, and ultimately kill the person in question.

Understanding how someone dies from fear is quite different from actually documenting such events in the wild. Few if any deceased Americans have “fear” listed on their autopsy report. But one feature of an emotion-induced heart attack stands out: The hearts of many otherwise healthy people who seem to have died suddenly after overwhelming feeling—whether it was from broken-heart syndrome, a loud noise, or all-consuming fear—don’t display any blockages. Unlike with cardiac patients, blood flows normally through a frightened person’s body; their calcified heart simply can’t do anything with it.

Fear and stress remain poorly understood. Experimentation is all but impossible, and linking psychological states to a physical outcome is a challenge. Still, scientists continue to chip away at this frightful facade. In 2001, for example, researchers published a seemingly-outlandish study suggesting that deaths from cardiac episodes peaked on the fourth day of each month in China and Japan. In those countries, the word “four” sounds quite similar to the word for death, so it’s considered unlucky. While this is hardly the last word on the subject, the scientists provided a great name for the supposed phenomenon: the Baskerville effect, after a character in a Sherlock Holmes novel who died because he believed he’d seen a fire-breathing dog.

Fear really can kill you, but that doesn’t mean it’s time freak out. Such events appear rare, especially in healthy individuals without pre-existing heart conditions. And besides, if your fear is dying from fear, the best thing to do is certainly to calm down. But you might want to be careful of inspiring fear in others, even on Halloween: courts have held individuals accountable for scaring people to death before, and are liable to do it again.