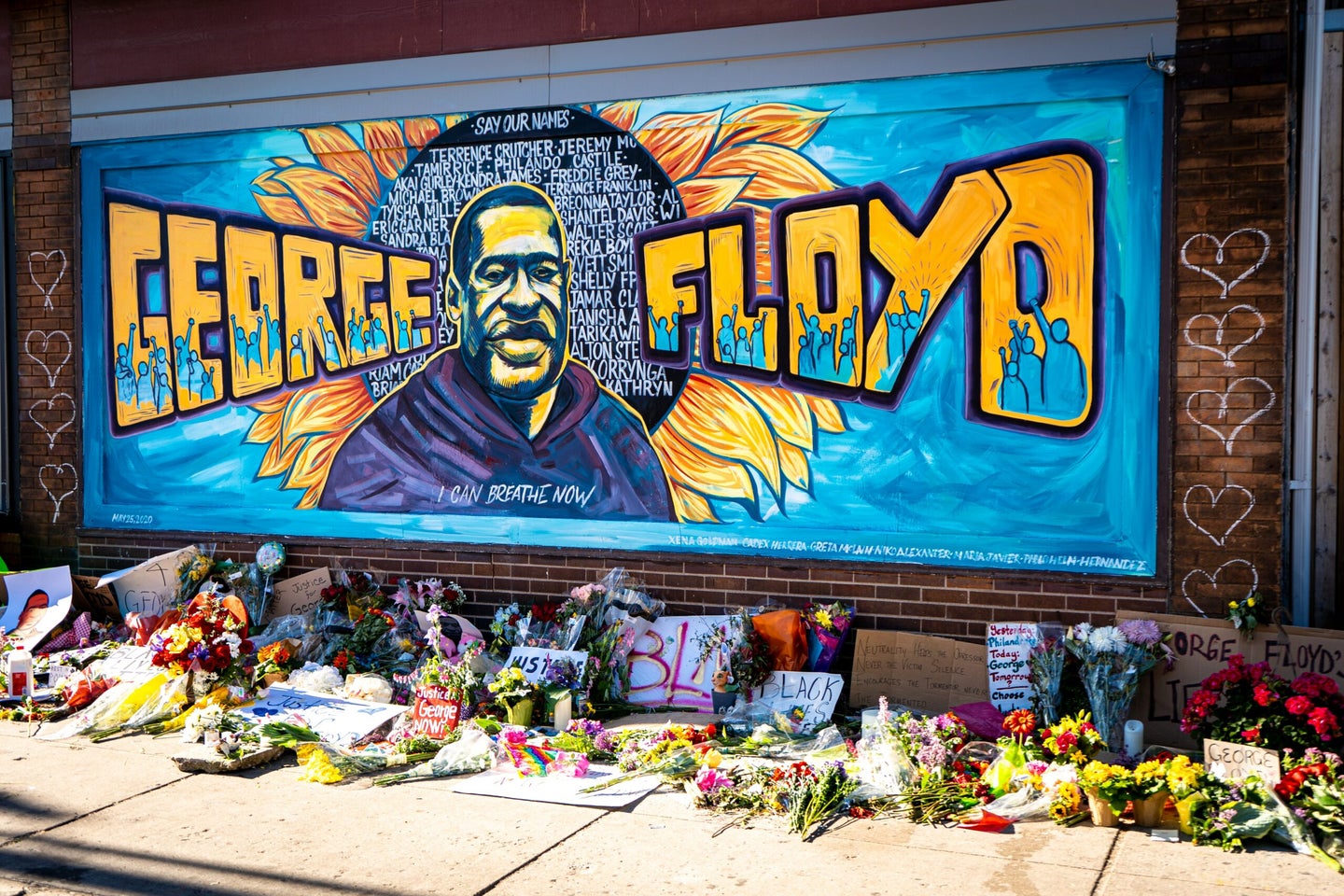 A mural in Minneapolis, Minnesota, commemorates George Floyd, who was killed while being restrained by city police officers in May. Video of his death, taken primarily by a teenager, has since flooded the internet. munshots/Unsplash
SHARE

The next time you decide to hit the retweet button, think again. That video of Derek Chauvin pressing his knee into George Floyd’s neck for nearly nine minutes could have deleterious mental health impacts on the Black community.

From abolitionist Frederick Douglass’ essays on the horrors of slavery to ad hoc social media footage of police brutality, the documentation of brutality against Black people is nothing new. But in this era, in which the power of a camera lies at nearly everyone’s fingertips, the stories have taken a visceral, viral turn.

On March 3, 1991, George Holliday stood on a balcony across from Hansen Dam Park in Los Angeles, filming four officers as they beat and tased Rodney King. This was the first police-brutality video of its kind—nationally circulated on television and massively powerful. After the four officers were proclaimed not guilty, Los Angelenos protested for five days.

Since then, videos have played a crucial part in anti-racism and anti-police-brutality demonstrations. In the last few months, clips of Ahmaud Arbery’s and George Floyd’s murders instigated a nationwide outcry that resulted in the arrest and charge of the perpetrators. Footage of the deaths of other Black men and women continues to be released each week.

The power of video is undeniable—but the net effect isn’t always positive. While they can quickly spread awareness of brutal racial violence and prompt outrage, they also continuously inflict racial trauma on the Black community with each retweet and reshare. Could these videos be doing more harm than good?

Trauma through the screen

In a 2018 study published in The Lancet, Boston University researchers found that in the two months following the murders of Black individuals by police, Black individuals living near the crime scene experienced significant deterioration in mental health, along with symptoms of trauma. While most people didn’t directly witness the violence, the dissemination of videos and news reports still caused longstanding mental health problems.

Allissa Richardson, an assistant professor of journalism and communication at the University of Southern California, refers to ubuntu, which means “I am because we are” in the southern African language of Nguni Bantu. “It states that we are interconnected,” Richardson says. “I see my own self in you. That could be my dad lying there, getting the life squeezed out of him. So I can not watch.”

Many compare race-based trauma to vicarious trauma, which typically impacts health care workers, counselors, and psychologists who feel the residual emotional impact of other peoples’ experiences. But University of Ottawa psychologist Monica Williams, who specializes in race-based trauma, clarifies that the two can’t be compared.

The trauma that Black people face is more vivid and personal, she says. “They are seeing members of their own community brutalized. There’s a level of direct threat that’s not necessarily present when a client is describing a story to a counselor.”

“The videos are passed around like popcorn at the theater,” Williams adds. “The images aren’t treated with the same dignity and respect that you’d give to anyone else.” After seeing the barrage of violent clips on social media and the news, Black people may experience stress and mental health symptoms such as crying, depression, severe lack of motivation, low self-esteem, and a chronic inability to focus and concentrate, she says. According to the US Department of Health and Human Services, Black Americans are 20 percent more likely to report severe psychological distress than their white counterparts. At the same time, they’re less likely to seek out treatment, due to a chronic lack of health resources in their neighborhoods and a historic lack of trust with hospitals and doctors.

Into the shadow archive

Ultimately, non-Black social media users and journalists have a responsibility to treat these videos more sacredly. Part of that means looking at their sharing behavior after other traumatic events. The deaths of white people, for instance, are rarely broadcast on national television; in the case of the 2017 Las Vegas mass shooting, the initial torrent of footage was largely replaced with more respectful portraits of the victims.

Where did the videos of the tragedy go? Into what is called the “shadow archive,” says Richardson, who recently published a book exploring the lives of journalist-activists as they documented Black Lives Matter through their smartphones. The “shadow archive” can be tangible (like a museum or a library) or metaphorical—a place where images of death can go to rest and only be accessed by those who wish to view them out of respect, education, and awareness. The idea originated with Ida B. Wells, a trailblazing investigative journalist in the early 20th century, who frequently dispatched white photographers to document lynchings in the South, and published the photos in the NAACP’s magazine, The Crisis. Once the images reached full circulation and incited lobbying for anti-lynching laws, the organization placed them in a metaphorical shadow archive, preventing them from being published again.

The transition serves a moral purpose, but it can benefit people’s mental health, too. What’s more, it leaves room for a deeper representation of Black individuals on social media and the news. When Black women and men die on camera, media companies broadcast them with the same casual air of a sports highlight, Richardson says. “I’m calling for us to use these pictures judiciously. Not doing so at this point [denies] Floyd the same dignity we’ve given white victims.” While it may be difficult to encourage companies like Google and Facebook to keep these videos from resurfacing on their feeds, social media users have the power of making a shadow archive of their own—simply by declining to hit a button or two.