Your bones do more than you give them credit for

The skeleton is more than just a support system. 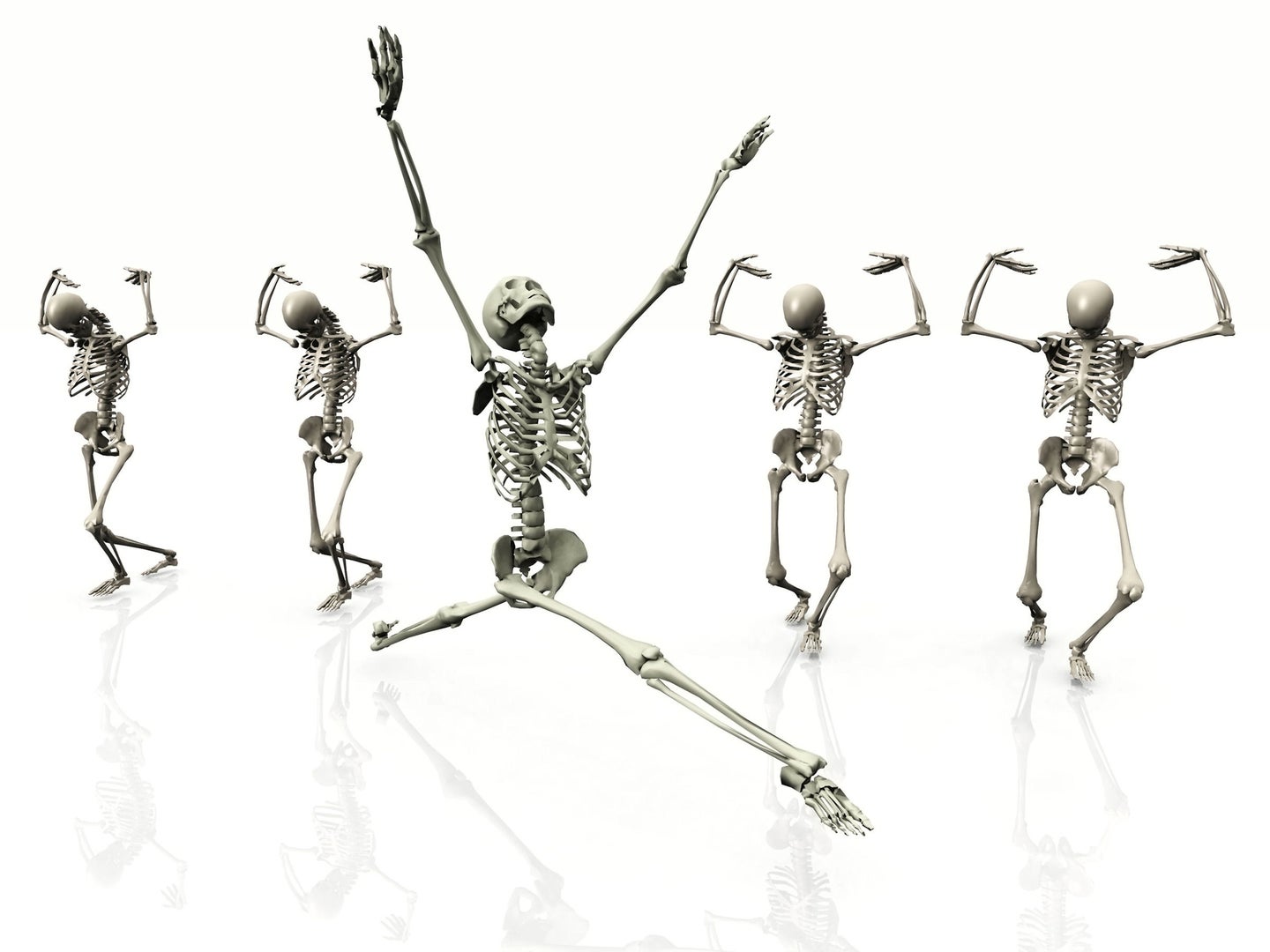 Spooky, scary: Halloween has given skeletons a bad rap. (It’s also given you a really inaccurate idea of what your skeleton looks like, but that’s another story.) A healthy set of bones is nothing to be afraid of—in fact, it’s essential to keeping your body running smoothly, and not just because it holds all your squishier bits upright.

Although bones look static when preserved in a museum or modeled in a classroom, bone in your body is just as alive as your lungs, liver, or kidneys. It’s made up of hard, heavy outside tissue, known as “compact tissue”, which surrounds spongy “cancellous” tissue and liquidey bone marrow. The whole system is fed by a network of veins and arteries that carry in oxygen and energy and carry out waste and the substances produced in the bones. Surrounding the compact bone is the periosteum, a fibrous membrane that helps repair and grow the bones. The only places not covered by the periosteum are where cartilage surrounds the bone, as in joints, or where ligaments and tendons attach, connecting the bone to muscles. It’s a complicated system that isn’t really captured by the dried-out compact and cancellous tissue that remains in a dead skeleton.

Over the course of your life, your bones will fuse together, endure trauma, change shape, and keep you moving—all while their tissue is constantly remodeled and replaced. Bone is a “living organ,” says Luiz Bertassoni, an associate professor of dentistry and biomedical engineering at Oregon Health and Science University. “Like any other living organ, you have a humongous amount of interactions and complexity that goes into keeping it alive and functioning well.”

What does bone do?

Until pretty recently, what scientists knew about skeletons came from gross anatomy, says science writer Riley Black, author of Skeleton Keys: The Secret Life of Bone. (That’s anatomy we can observe with our eyes, not anatomy that’s disgusting, though your results may vary.) Historically, bone’s functions in protecting vital organs and holding people up were well-known, and its relationships to things like the muscles—to which bone connects—were also recognized.

Galen of Pergamon, a Greek doctor who lived during the first century, wrote that bones “sustain and support the other elements of the body as a foundation, for everything is secured and attached to the bones.” He wasn’t totally wrong in this—although bones can’t move in their own right, the skeletal system is an essential part of human movement, because it provides the anchor against which muscles, ligaments, and tendons can work their push-pull magic.

But there’s a lot going on with bones that you can’t see just by cutting open a cadaver. In addition to providing structure and physical protection, bone “also regulates a wide variety of biological phenomena in the body,” says Bertassoni. “Everything is actually embedded within the hard tissue that you see.”

Our understanding of the skeleton’s many roles has expanded a lot thanks to evolving imaging technologies, Black says. They allowed scientists over the past 125 years to see inside living bodies and watch bone in action. The first glimpse at living bones in situ came in 1895, when X-ray inventor Wilhelm Rontgen took a picture of his wife Anna Bertha Ludwig’s hand bones. (History did not record what Ludwig thought about seeing her own hand, complete with wedding ring.)

It’s thought that the reason humans and other animals evolved internal bones in the first place is related to protection, a theory that’s bolstered by recent research into bone function. Some of your bones (think skull and ribs, for example) still act to encase your soft bits. But your bones also protect the squishy marrow inside of them, which is essential for producing blood. Bone marrow contains special stem cells that churn out both red and white blood cells, which bring oxygen to all of your body’s tissues and fight off sickening microbial invaders. We’ve known about this function since the 1950s.

This part of bone also stores minerals until your body needs them–namely calcium and phosphate. Your muscles and nerves need these minerals to function, but only in very specific quantities. Bone, which stores about 99 percent of the calcium in your body and about 85 percent of the phosphorus, acts as a “bank” from which the rest of you can withdraw these resources when needed.

Research over the past two decades has revealed another surprising role that bone plays: creating and regulating the hormone osteocalcin. A study from 2019 suggests that among its other roles, osteocalcin sparks your fight-or-flight instinct—which makes some sense, if you consider that bones have a big role in your body’s ability to fight or run away.

Osteocalcin, which is the only hormone bone is known to produce, is released by the bones in situations of acute stress. It’s responsible for “turning off” the parasympathetic nervous system, the one we use when things are all copacetic. Then, adrenaline and cortisol (also what I named my fists) step in to get you psyched up for a fight or a flight.

When you’re born, you have almost 300 bones, and many of them are still made out of cartilage. This rubbery tissue, which remains an essential part of the skeletal system into adulthood as padding for your joints, makes newborn babies nice and flexible, something they need if they’re going to spend months curled up in a womb and make their way out into the world through a tight birth canal. There are a few exceptions, such as the skull—although even that is made up of multiple pieces at birth, which fuse together in the first few years of life.

As you grow, your bones harden and some of them fuse together. By early adulthood (think about 18 for girls and about 20 for boys), your bone count is down to 206, which is the number of bones you’ll carry with you for the rest of your life. But the system continues to change, in a process called “remodeling.” In this process, small amounts of your existing hard bone are removed and replaced with new bone. “Remodeling repairs the damage to the skeleton that can result from repeated stressed by replacing small cracks or deformities in areas of cell damage,” the National Institute of Health writes. This process also recycles old bone, which can be dangerously brittle, processing the minerals it contains so they can be used by other parts of the body that need them. You pretty much have a new and different skeleton every 10 years because of all this maintenance.

How does your body know what shape your bones should take? Your genes govern the growth and maintenance of your skeleton, just like they do every part of your anatomy. But that skeleton can also be “greatly affected” by what you do, the NIH writes. Studies have found that people who do high-impact exercise or have physical jobs have different bone shapes from the average person, dictated by the kind of physical activity they do. Bone strength is also related to how much physical activity someone gets–as with muscle, the NIH cautions, bones can get weaker if they’re not used enough. Seen this way, the skeleton you end up with is “really a living time capsule of your life and what you’ve been through,” says Black.

There’s a lot more to learn about bones, and new technologies—like the “bone in a dish” Bertassoni and his colleagues developed—are helping researchers do so. This model of bone, which is grown out of the same kinds of cells, replicates the way the hard material is structured and how it plays host to other soft materials, like nerves and blood vessels. In time, the researchers hope it can be used in bone grafts as well as in research.

In building the material, the OHSU researcher says he’s become fascinated by bone’s structure. Look inside, he says, and you’ll see thousands of microscopic structures—tiny holes that allow materials to enter and leave—delicately spaced out to disperse the forces bone is subjected to even as it performs many other functions. The result is “nothing short of a work of art,” he says.