America’s standard, bland beer is slowly being replaced by the weird stuff

One day, we may even have a "Dino-Brew" 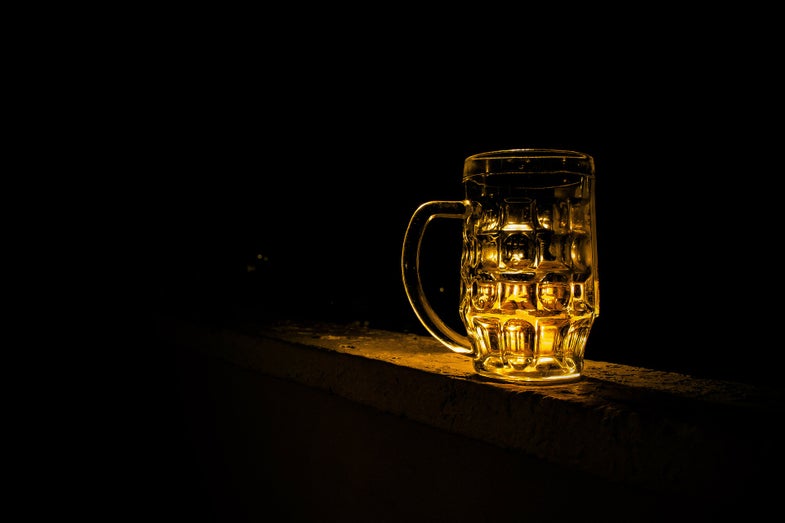 The following is an excerpt from Ancient Brews by Patrick McGovern.

Extreme fermented beverages have become all the rage today in the United States, and the movement is now picking up steam elsewhere around the world. In 2000, American beers were uniformly thin and bland when Sam [Calagione–founder of Dogfish Head brewery] and I started out on our odyssey in making and releasing Midas Touch. A revolution has occurred in the past 15 years, with more than two new breweries opening every day in the United States in 2016. Many of these breweries are headed by homebrewers, who cut their teeth on high-octane IPAs, sour Belgians, and ultradark stouts. They venture beyond the mainstream beers, which might be good for liquid refreshment but have none of the pizzazz and excitement of extreme brews. They are ready to throw anything into the brew kettle.

Sam was right at the cutting edge of this renaissance. Since 1995, when Dogfish Head first opened, he’s used nearly every kind of ingredient you can think of in his beers—fruits, grains, herbs, and spices. He’s tried ageing in different kinds of wood. He’s even tried his hand at re-creating what he calls ancient fermented beverages, including an Ethiopian tej and a Finnish sahti, before we got together. His imagination and experimentation show no bounds, which is the essential definition of an extreme fermented beverage-maker.

Any attempt at making a truly ancient extreme fermented beverage faces many challenges. Besides articulating the scientific rationale for the ancient ingredients and process, an authentic re-creation or reasonable facsimile thereof faces a great conundrum: What microorganisms were active in the brew? Yeasts and other microbes provide much of the flavor and aroma of a fermented beverage. Yet precisely identifying them in ancient drinks by ultrasensitive microscopic and chemical techniques, such as DNA technology, is a work in progress.

Every part of the globe has its native microflora living in happy (and sometimes bellicose) symbiosis (and conflict) with one another. Even the colors of rice beers in China are influenced by their ecological niches. The scientific sampling and description of the current range of microorganisms from each region has hardly begun to be enumerated, let alone for those buried in the deep past. Would-be brewers of ancient fermented beverages must improvise by sometimes collecting their own “native” yeasts, retroengineering a likely candidate, or approximating the microbe community in the ancient landscape with modern strains. When we wanted to re-create a sourer version of Kvasir, for example, we turned to the assemblage of microbes in Belgian lambic beers. We had nothing comparable from the far northern reaches of Scotland and Scandinavia from where the evidence for the drink came.

Lambic beers illustrate what can be done to zero in on the ancient microorganisms, assuming that you have a dedicated cadre of scientists pursuing research on the subject. No one knows how old lambic beer-making is, but some of its ingredients (native European berries and cherries), its barley and wheat, and especially the more than 2000 microbes, many found only along the Zenne River flowing through Brussels, set it apart from most other European brews in the Reinheitsgebot mold. Their Asian spices, brown sugar, and fruits such as banana, apricot, and lemon, however, are of more recent vintage.

Like Chinese rice beer, lambics are spontaneously inoculated by those microorganisms that inhabit the vicinity. They can grow and drop down from the rafters of the old breweries into the open wood fermentation tanks during the cold months of the year when the brewing is done, or insects can bring the microbes in on their bodies when they are attracted to the sweet wort, the sugary liquid that results from the enzymatic breakdown of cereal carbohydrates during the malting and mashing processes. What happens next, over two to three years and going from tank to oak fermentation and ageing barrels, is nothing short of amazing. It is more like a carefully choreographed dance of microbes rather than a fight to the death, which it also is. Enterobacter spp., whose name points to their main activity in animal guts, proliferate at first. They are quickly succeeded by Pediococcus damnosus, followed by a host of other bacterial species, Saccharomyces uvarum, and Dekkera bruxellensis. S. cerevisiae and S. bayanus (pastorianus) fill the breach, as the alcohol level rises. Brettanomyces, Pedioccus, and Lactobacillus spp. then proliferate during the rest of the first year’s fermentation. Finally, Acetobacter spp. make their appearance to give the brew a marked sour character. From start to finish, numerous aromatic compounds are generated and regenerated, yielding a beverage full of natural flavors and aromas.

Such a complicated process and diverse array of microorganisms in one region speak well for a greater antiquity of the beverage, although other yeasts and bacteria might be introduced from the outside from time to time, to find their place in the dance.

In Search of the Holy Grail of Extreme Fermented Beverages

If I were asked what is the ultimate re-creation of an extreme fermented beverage, my answer would be a Dino-Brew, drawing upon the available evidence from the Cretaceous period, or a Palaeo-Brew from our hunter-gatherer days.

Recently, what is thought to be the ancestral alcohol dehydrogenase (AdhA) gene was discovered in S. cerevisiae. Once the DNA researchers knew the ancient DNA sequence, they retroengineered what can be called a “Dino”-yeast by replacing the modern S. cerevisiae versions of the gene (duplicated as Adh1 and Adh2) with the ancient one. They even made some beer with it with moderate success. They also sent us a sample of their reconstructed yeast, in the hope that Sam and I would have a go at using it. That yeast now sits frozen in Dogfish Head’s yeast library, awaiting the day when we might resuscitate it to make a truly Ancient Ale.

But before we get too excited, we should first ponder what the ingredient list or the grain bill—the technical phase used by modern beer-makers for the starting sugar formula—might have been for an extreme fermented beverage during Cretaceous times, which even a dinosaur might have appreciated. We would need to base our ingredient list on what was available in Africa at the time, since no samples of such a beverage have been found and analyzed and may never be. Dinosaurs were presumably attracted to similar fruits, herbs, flowers, and other plants as their descendants, the birds, are today. We can then examine the available fossil record, as well as later archaeobotanical evidence, for clues to the flora that emerged in the Cretaceous period, which are ancestral to prehistoric and modern species.

We would have to make educated guesses as to what ingredients might have been found in the same locale and could have been accidentally mixed together to be fermented by a yeast comparable to our reconstructed Dino-yeast. The process might have been similar to the scene in Animals Are Beautiful People. Dinosaurs, instead of elephants, might have knocked ripe fruit onto the ground, where liquid collected. Sap from a nearby tree might have oozed into the puddle. Some herbal ground cover might have been trampled down to spice up the concoction. Investigating insects might have inoculated the mix with microorganisms and started its fermentation. Curious protoprimates, related to tree shrews, might even have happened by and been surprised by the result. For the time being, any fermentation and drinking scenario for the Cretaceous period will remain highly conjectural and a far cry from reality.