Humans have a better sense of smell than you think 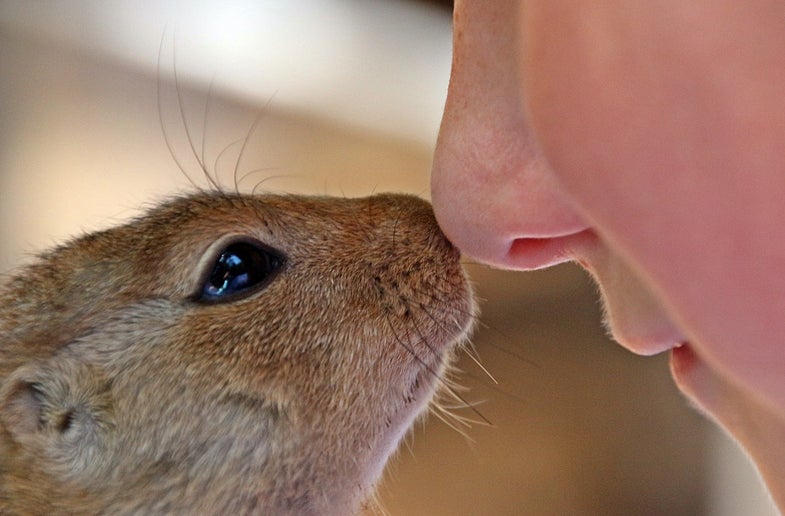 “Most people with a healthy sense of smell can smell almost anything that gets in the nose,” said John MacGann, an associate professor of neuroscience at Rutgers University. “In fact, there used to be whole field of trying to find odors that people couldn’t smell.”

Used to be, because thanks to our roughly 400 smell receptors, finding things humans couldn’t smell was a bit of a fool’s errand. Humans, as McGann makes clear in a review paper published today in the journal Science, are actually quite phenomenal sniffers.

If you think this flies in the face of conventional wisdom, you’re not wrong—but conventional wisdom is. You have Paul Broca, a 19th-century anthropologist and anatomist, to thank for the error. Back then Broca, whose name now adorns the region of the brain devoted to speech, had something of a feud with the Catholic Church. They hated him for “pushing atheisms and materialism,” and as a result Broca felt the need to double down on his reductionist view—that is, the idea that any complex phenomenon can be explained by analyzing its simplest mechanisms.

In this case, the mechanism was the olfactory bulb, a brain structure that receives input from sensory neurons devoted to smell located in our nasal passage and sends those signals to the brain. Humans have a smaller olfactory bulb—relative to our brain size—than other animals. When Broca saw that humans not only possess puny olfactory bulbs, but also don’t seem to exhibit certain smell-compelled behaviors (we don’t really run around sniffing each other’s butts the way dogs do) he came to the conclusion that our sense of smell must be lacking. He missed that humans do indeed have some smell seeking behaviors—we tend to sniff our hands after shaking someone else’s hands, for example (whether or not we realize it).

In 1924, McGann notes in his new paper, Charles Herrick wrote in the book Neorological Foundations of Animal Behavior that “the olfactory organs of humans were viewed as ‘greatly reduced, almost vestigial,’ coupled with the idea that ‘the enormously larger apparatus of most other mammals gives them powers far beyond our comprehension.” Even Freud noted that the sense of smell was “usually atrophied in humans.”

And that, friends, is how a misconception becomes a piece of conventional wisdom. Even in the year 2017, most people still think that humans are lousy smellers. But while it is true that our olfactory bulb is smaller relative to the size of our brains than, say, that of rat’s, it’s also true that our olfactory structures are different than those seen in other mammals. Humans have fewer odor receptors, but they’re packed with far more sensory nerve clusters than those seen in rodents. So we do more with the relatively little we have.

Along with some other cerebral differences, these nerve clusters mean we’re not worse smellers than our furry friends. We just smell differently. A dog might be better at detecting urine on a fire hydrant, for example, while a human may be better at detecting the complex notes in a glass of wine. Or at least we think so. As a of yet, no dog has been able to say whether her glass of pinot smelled earthy or if the fruity notes she was detecting were cherry or raspberry.

“People under-appreciate our ability to combine incoming chemicals into single percepts,” said McGann. “If I tell you to imagine the smell of coffee, there’s about 150 different chemicals that come out of coffee into your nose. The combination makes the synthetic percept of coffee. You don’t even have access to the specific pieces, it’s just coffee to you.”

“And if you imagine having a cup of coffee while you’re eating a croissant in a bakery, you’ve got this complicated mixture of smells from the coffee, a complicated mixture of chemicals from the croissant, and it’s all against this very broad complicated background of smells from the bakery, but you can tell them apart,” he added. “Your brain is designed, it seems, to pick out the clusters and combine them into single percepts. We really don’t appreciate how many different chemicals are mixed together to make what we perceive as a smell.”

Not everything you think you know about your nose is false. The popular notion that smell is a tremendous piece of the flavor experience that we get from food is very true. And women tend to be have a better sense of smell in terms of sensitivity, discrimination, and odor detection. It’s a pattern that seems to hold up in rodents, where experiments have removed female rats’ ovaries and found that their sense of smell declined. When scientists removed the testes from male rats, their sense of smell increased.

McGan’s paper includes some other fascinating factoids. While it seems like just about everything we do can damage our sense of hearing, there’s not much you can do to kill your sense of smell—with a few notable exceptions. Smoking is a big smell killer, though you can often regain some of what you’ve lost after quitting. And in 2009, zinc gluconate-containing products designed to be sprayed or swabbed in the nostrils to help fight off colds were found to cause permanent loss of smell.

“There are people who have lost their sense of smell, and it’s traumatic,” said McGan. “It’s upsetting and difficult to lose their sense of smell. And because people kind of shrug and say that smell is not that important in life, there’s sort of a lack of validation and a lack of motivation and interest in finding ways to help. If we can really bust this myth for good, to have everyone understand that smell really is important for humans and it really does influence our lives, then hopefully that will validate the people who are anosmatic [people who can’t smell] and struggling with it. And maybe it’ll help motivate more research or clinical awareness to help those folks.”