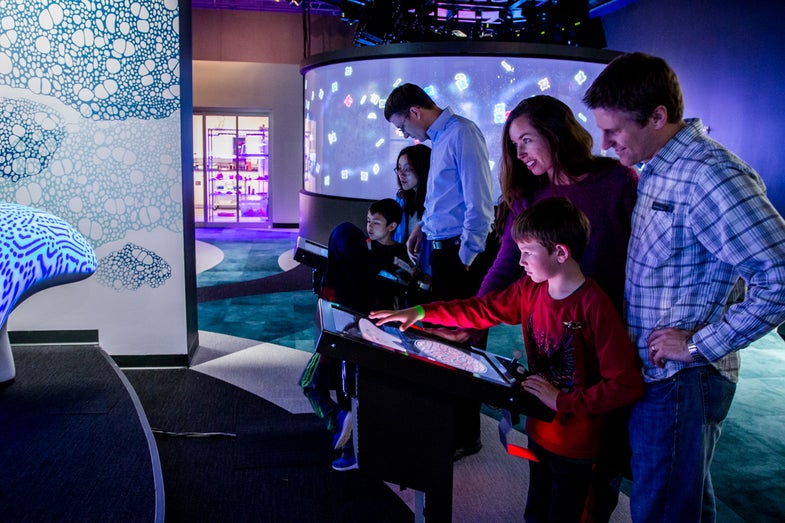 The Tech Museum of Innovation in San Jose opened the first major exhibit in a science museum to explore biodesign on Friday. The BioDesign Studio exhibit offers visitors a chance to explore genetic engineering through a series of large-scale, interactive displays and hands-on experiments.

The museum, which invested $5 million and plans to exhibit the BioDesign Studio for a decade, is betting that biotechnology will join computing as a major industry in Silicon Valley, where the museum is based. “We’ll be inspiring the next generation of biotech innovators,” says museum president Tim Ritchie.

Unlike bioengineers who rarely see the individual microbes they work with, one display allows visitors to make genetic changes on basketball-sized microbes using physical blocks that represent DNA. Add one gene and the animated microbes morph shape on an enormous curved wall; add another and they glom together; add third and they die. There are over 25 genes to mix and match. The display is one of several that demonstrate how small genetic tweaks can have large impacts on single-celled organisms, animals, and entire ecosystems.

Alongside virtual organisms, the museum is hosting a series of classes that allow visitors to work with living things. The first workshop will teach students to grow mushrooms bricks similar to what artists like Philip Ross and materials companies like Ecovative are doing. The museum will also showcase student work from the Biodesign Challenge starting in mid-April.

The exhibit’s director, Romie Littrell, spoke on a biodesign panel moderated by BDC at South By Southwest last week about the future of biodesign. “The people who need to solve the huge problems we face with global food and health 15 years down the road are the same people who will visit this exhibit right now,” he says. “It all begins with making them feel that biology is fun and interesting.”