Aiming to connect 10 million travelers through 100 stations by 2016 Google and Facebook are in a race to get the next billion people online. While Zuckerberg and his company are involved in their philanthropic Internet.org effort to connect the developing world and are building internet-beaming drones, Google’s Project Loon is launching balloons into the stratosphere to broadcast data signals down on those without. But these wildly experimental projects are still in their infancy. Starting today in India, Google is turning to an older and more established technology to bring connectivity to more people: using the country’s extensive train system to offer free internet to the 10 million travelers who pass through 100 of India’s busiest rail stations every day.

That’s a huge number by any measure, but is even more impactful in India, where 100 million people just began using internet for the first time this year, leaving the majority of the country’s 1.3 billion people without.

In a historic announcement posted on the official Google company blog, CEO Sundar Pichai, himself born in India, reminisces about his younger days when relied heavily on the Indian railway system to get around. Now he’s become the native son made good, explaining in his post how Google’s Access & Energy team has partnered with the nationally-owned Indian Railways and telecom company RailTel to outfit 400 total train stations across the country with high-speed Wi-Fi — though it will take some time to reach that number, with the first 100 stations scheduled to come online by the end of 2016. 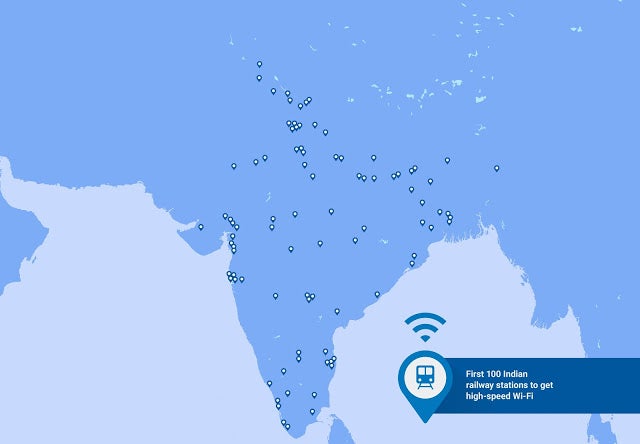 Still, there’s no mistaking Google’s ultimate ambition: getting the majority of Indians online. As Pichai writes: “We’d like to help get these next billion Indians online—so they can access the entire web, and all of its information and opportunity. And not just with any old connection—with fast broadband so they can experience the best of the web.”

So far, most other private-public WiFi partnerships have been restricted to much smaller areas, such as municipalities. New York City, for example, began offering internet in subway stations in 2011, and has since expanded to include over 63 stations, with plans to outfit all by 2017, by which time Google is scheduled to be well on its way toward blanketing India with Wi-Fi.

Google itself has offered paid, high-speed internet service and TV plans through its Google Fiber programs in Kansas City, Austin, and Provo (Utah), and has plans to expand to six more cities in the coming years (and six more after that), but those projects are mostly residential in nature, and limited to the U.S. for now.

But with Google hoping to present an entire country with internet, many of whose residents aren’t currently online, the stakes are much higher. So, too, is the payoff. If the company elects to use its high-speed Wi-Fi project in India to promote its other online services—such as Google Docs, Gmail, YouTube, Android, and of course, Search— that could create a large new potential audience for Google’s lucrative ad network. Having tens of millions of mobile device owners visiting the Google-branded internet and telling their friends about it could be key for Google in the long run, especially as Facebook has begun to challenge Google in terms of video hosting and advertising spending.

Aside from the announcement of India train station WiFi, Google has a busy week ahead of it, with an event scheduled for Tuesday, September 29. Leaked photos indicate that Google will likely reveal new versions of its Nexus phones (reportedly named the Nexus 5X and 6P), and other rumors point toward a new version of Google’s Chromecast, its popular streaming media stick.

Coupled with Google’s low-cost smartphone Android One, the company not only wants the entire world using the internet, they want the world using their internet. For now, at least in areas without the infrastructure or service necessary to connect, that’s a win-win.