Why Bill Nye is set to march on Washington

Sometimes science should be political 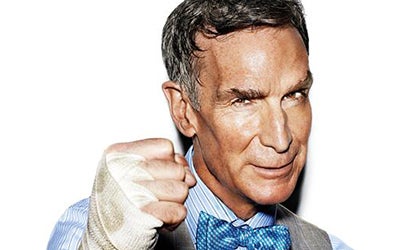 Bill Nye remembers the very first official Earth Day, when Senator Gaylord Nelson founded an environmental teach-in on April 22, 1970. “I went to Washington and locked my bike to some flag pole,” Nye muses. “I assume if you did that today, you’d be disappeared.”

This year’s Earth Day celebration will be a little different for “The Science Guy”, an engineer and educator famous for the so-named children’s show of the ’90s. The event falls the day after the premier of his new Netflix series, Bill Nye Saves The World. And instead of looking for a place to stash his bike on Saturday, he’ll serve as co-chair of the first-ever March For Science.

The event—part protest, part march, part teach-in—comes in response to a growing sense that scientific facts are being politicized in an effort to discredit science-based policy. PopSci‘s recent series on the past, present, and future of the Environmental Protection Agency examined some of the dangers of turning scientific inquiry into a partisan act. But not all would-be participants in Saturday’s march agree on just what scientists should be marching for—if they should be marching at all. As Buzzfeed’s Azeen Ghorayshi recently reported, plans for the march have been fraught with in-fighting over how diversity should factor in: should the march officially support the protest of policies that hurt marginalized scientists like women, people of color, the disabled, members of the LGBTQ community, and immigrants from other nations? Or should it preserve the sanctity of science as an apolitical entity by leaving potentially partisan talk at the door?

Nye shies away from taking much of a stance on that, though he’s quick to say that he personally supports more diversity in science. But he’s crystal clear on one point: science may not be partisan, but it sure as hell is political. He’s marching to keep it that way.

“Science is political, and it always has been,” he says. “We want science to provide guidance to laws and policies. Right now there’s a trend to base policies on intuition instead of facts. And if you stop and think for just a moment, we can see that no one actually wants to do that.”

Unfortunately, he adds, “as my parents so often said, common sense is not so common.”

And while the current administration has made some troubling moves toward throwing science-based policy out the window, Nye feels that the tendency to disregard science has been building for quite some time: the partisan divide in belief of human-induced climate change didn’t appear out of the ether in November of 2016. In fact his new Netflix show, which aims to remind viewers of the importance of scientific research, was conceived and created before the election.

“We were just making what we thought people wanted to watch,” he says, “So I’m prouder of the show now than ever.”

When scientists and science lovers march on Saturday, they’ll do it for their own reasons: some will march for gender equality in the sciences, some will march to keep borders open in order to keep the country filled with the best and brightest scientists in the world, some will march to remind people around the world that invaluable research is being done by individuals who are fearful of their personal wellbeing under the current administration. Some will no doubt march to support the continued funding of earth science research, which is currently under threat. But Nye, perhaps the march’s most famous supporter, says his biggest goal is just to keep the American experiment going.

“I think of the founding fathers as nerds, trying to design a government with these properties and have these outcomes, and building in change, building in continual peer review,” he says. “For whatever reason in recent years, our government has not been moving in that nerdy, continual-change-built-in, scientific fashion.”

He hopes the march will remind people of the value of basic research in keeping America competitive in everything from artificial intelligence and spaceflight to cancer treatment and environmental cleanliness.

“I want the U.S. to remain a world leader, and for that we need science,” Nye says. “We use the word science, but we don’t mean one fact or another. We mean a process. The process by which we know nature, a process that continually changes through constant refinement. And when it reveals facts, you’ve got to respect the facts.”

For a president to get elected, Nye feels, they should base their policies on the best available science—full stop. And he hopes he can help get everybody back on board with that idea.

“The only things you can count on in life are the things you’re going to change,” he says.