An Internet Map To Rule Them All

It's detailed, open to the public, and still not a series of tubes

Despite the fact that we use it every day, most of us don’t really know where the Internet comes from or how it works. Hint: it’s not magic, and it’s not exactly a ‘series of tubes’.

In a paper that was presented at the Sigcomm conference this summer, researchers have put together a fuller picture of the physical internet–the cell towers, routers, switches, and fiber-optic cables that make the World Wide Web work. They ended up creating the first detailed, public map of Internet infrastructure.

Sure, you could just go to Comcast’s website to see where its network coverage is, but the maps that have been available so far have been either far less detailed or decentralized.

The researchers combined data from companies like Comcast and Verizon with data from the Internet Atlas project, and then added in information found in public records to build a U.S. map of the long-haul fiber-optic wired Internet–which is the static underlying infrastructure that connects cities across the country. The amount of data combing and combining they did is impressive, to say the least. 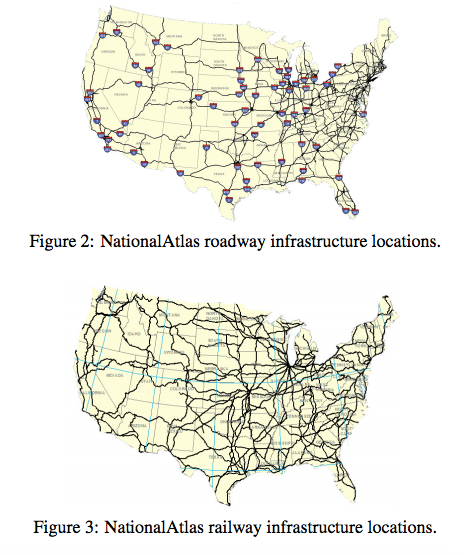 The map of the physical Internet (above) closely follows the map of U.S. roadways, and in some places, the railway map.

The resulting map is equally interesting. The northeast is densely packed, while the western plains are sparsely covered. The map above shows that the Internet infrastructure follows closely with interstate roadway routes, and less so with railways.

They were also able to determine that 89.67 percent of conduits were shared between at least two Internet service providers, and more than 50 percent were shared by at least four ISPs, finding that it was actually uncommon for a conduit to not be shared among more ISPs. To achieve better connectivity, they suggest cutting down on sharing, and strategically deploying new fiber optic routes.

“It provides quantitative data where all we had was anecdotes,” writes David Wetherall of Google and the University of Washington, in the public review of the paper.

And despite all the work that went into it, the researchers concede that the map is not complete. “We hope this work will spark a community effort aimed at gradually improving the overall fidelity of our basic map by contributing to a growing database of information,” they write. And since the process is replicable, the researchers note that the method could be used to build maps of the Internet infrastructure in other countries, too.