No, really--It's called 'How to Speak Emoji' 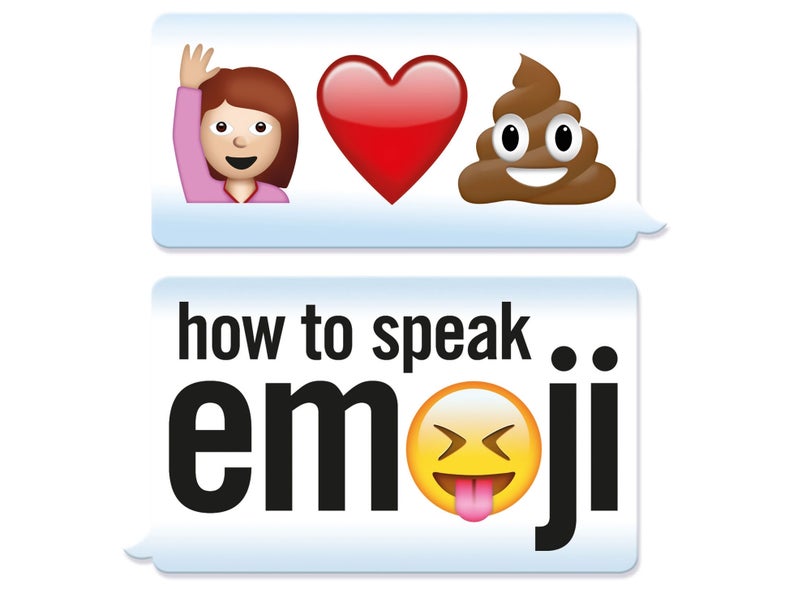 Fred Benenson is probably best known for his book, Emoji Dick, which may not refer to quite what you’re thinking. The project, born on Kickstarter in 2011, translated Herman Melville’s classic tome Moby Dick into the colorful Unicode characters known as emoji.

Silly as this may seem, the experience has provided Benenson with some interesting insights into how we communicate and express ourselves. His new book, How to Speak Emoji, was released this year. It’s a playful (if impractical) riff off the phrase books you’d normally get when traveling abroad.

So next time you’re wondering how to greet someone in emoji, or ask for directions to the bathroom, see how far these little cartoons can take you. They’re not as universal as you might think, Benenson told Popular Science in a Q&A and during an interview on our new podcast Futuropolis​.

Popular Science: What originally got you into working with emojis?

Benenson: Apple supported emoji in Japan before they supported it in America. This was very intriguing to me; there are very few cases where you can’t get access to something anymore based on where you live. I had a friend who had a Japanese friend and they had figured it out and you could send emoji to people, but if they didn’t have the keyboard they couldn’t send it back. So it was this cool-kid-clique thing in early 2009. I figured out you had to download this Japanese app to basically awaken your iPhone to the emoji keyboard and then you could send emoji to people. So I got really into writing full sentences in emoji immediately.

Do you like them earnestly, or is there a little irony to it?

I genuinely like them a lot, but I’m not afraid to criticize them and observe idiosyncrasies and wonder why there are two camel emojis, and why there’s a pager and a fax machine emoji. There’s all these weird things about emoji that come from Japanese culture, so it’s this international set of icons, which is supposed to be universal, actually being quite closely tied to Japanese culture.

It seems to set up a contradiction: that it’s a universal language that everybody can access, but it has a real technological barrier.

That’s a good point. And it’s not just a technology barrier. I mean, it’s only on the most recent smartphones, and it wasn’t until recently that operating systems could even handle it. But then there’s also the fact that the emoji set itself is highly constrained. I think there’s 872 or something right now in the Apple iPhone. It’s a conflicted way of expressing yourself where you have to hope that the other person’s phone is going to support emoji.

What are the advantages of emoji over English or other traditional written languages?

I heard somebody explain it from a neurological point of view that when you see a smiling face, even if it’s a cartoon, it’s actually triggering the same parts of your brain that are activated when you see a normal person smile in real life. That caricature that you see in emoji is actually triggering real emotions in the same way that the physical manifestation of that person would be doing. And that’s super interesting.

It’s doing something that text can’t do: conveying emotion and subtlety of thought that you might not be able to do with a word or two. There’s a whole swath of human communication that we’ve been losing out on in text messages for years. Ever since everyone switched to text message to communicate, we’ve been missing some of the nuance of the tone of people’s voices, the expression on their faces. So you can see emoji as a reaction to that.

Its another degree of freedom for expressing myself using text. Trying to convey whole thoughts or sentences or works of literature in emoji requires you to think creatively. The act of trying to choose an emoji torepresent a word or a phrase or an idea really resonates with me. It’s the act of creating something. I’m working in this medium. I’ve got a pencil or a piece of code or oil paint—here are the constraints I have to work with. You’re skilled, but you’re also limited by the medium. Within that you can express yourself, and I think that emoji just makes that really acute.

If all I want is a crab emoji, but I can’t find a crab emoji, which one can I find that’s similar? Maybe I can choose a dragon emoji but I’ll have to contextualize it with this other thing. That act is just really enjoyable to me, and that’s why I like to communicate with them. It’s like these little image-based punny puzzles you can send to somebody. And when they get it, you can share this moment where you’ve transcended normal text communication. I think that’s really fun.

It’s a really great question, because I think a year or two ago, a lot of people were like, “The emoji set is too constrained! You only get these?!” Some people were proposing lots of additions to emoji and a lot of people are building their own apps that will let you choose custom emoji. Facebook and Skype all have their own weird custom sets of emoji and stickers. To me, those are kind of besides the point. If you see the limited set of emoji as a bad thing, then I think you’re missing the point. Maybe the list will get a little more robust, and maybe it will feel a little more international in the food selections, where about 70 percent of them are Japanese.

I can see the cultural items in emoji becoming more diverse, just in the way that they tried to solve some of the skin tone issues and gender diversity. I think that was good, but are we going to have a full-blown emoji language? I don’t know. No one decides about a future language. It all just depends on people’s habits and usages.

That said, I’m not gunning for the end of text. Language, maybe even English, is worthwhile and it’s fine to express things in text because there are just some concepts that you’ll never be able to express in emoji.

It seems to me that emoji depends so heavily on the context. How is that different with things like great literature?

Well, with Emoji Dick—my project to translate Moby Dick into emoji—part of the point was to experiment with what it would be like to take a magnificent achievement of novel-writing and try to boil it down to this relatively new way of expressing ourselves. I think that Emoji Dick is successful on some accounts and unsuccessful on other accounts. It depends where you pick up the story and what you’re really looking for.

Do you think there’s a difference between emoji as communication versus art?

In a lot of ways, I think of Emoji Dick as an art project rather than a true translation. And I’m much more comfortable with it being considered a work of art rather than a work of literature. What I was trying to communicate with Emoji Dick is this new language and its opportunity and the nature of distributed work, and maybe a little bit about literature. I wasn’t trying to sell a story about a man searching for a whale, so I guess it kind of depends on what you’re trying to communicate.

I hope that emoji is used enough and we’re all fluent enough with it that we can tell grand, amazing stories with it. We’re beginning to see that. Some people are getting very good at this stuff. I hope that my new book, How to Speak Emoji, kind of inspires more people to communicate something about themselves or about the world in in this new language and have it be a cultural experience like reading a book or a magazine.

Is there anything in particular that you’re hoping to change or instill in people with this new book project?

I think it’s about being a little bit more accepting in terms of how we communicate. A lot of people early on would ask me, “Is this the decline of language?” and “Are you concerned about what texting is doing for us?” I’m not that hung up on that. I think we probably read more now than ever before. The effort required to interpret emoji and to follow along with what someone is saying, it really takes creativity. And if I have any goal, it’s to realize how vast and expansive our abilities of communicating and expressing ourselves can be. I love the experimental drive, being able to draw outside the lines, and being able to express yourself in whatever way you feel comfortable.

If emoji is creative and open to interpretation, do you think that will lead to a breakdown in communication? What if a message gets interpreted in a way that it wasn’t intended?

That’s like asking a question like, “Should we go to Italy for vacation? I don’t know Italian. Well, maybe they’ll know a little English. Italy sounds great to me, let’s see if we can go there and make it work.” And then you’re in Italy and you’re like, “I don’t know if that’s the exit sign or the entrance sign.” And you figure it out, you know? There’s certainly a risk of getting confused and missing each other’s point, but humans communicate. We express things. Context matters a lot, and I think we’ll get along.

But if you’re really concerned and cynical about the future of culture, you could say well we’re boiling things down with emoji. Aren’t we going to miss the opportunity of language like Melville and Shakespeare? Shakespeare was famous for using words once and never again. You can’t do that with emoji; you’re always using the same thing. But I guess I’m not that concerned about that. I can’t get that worked up about it. Works like that will always have a place, and really sophisticated expression will always be a part of culture.

But I think when you’re dealing with these kinds of constraints, and you’re trying to make it work, amazing things happen. It’s like the way people might defend minimalism in architecture or art. You say, “There’s nothing there! How could you think this is beautiful?” And the minimalist would say, “Well, that’s the whole point.” Maybe that’s how I approach emoji.

Benenson was recently featured as a guest on Futuropolis, Popular Science’s podcast about everyday life in the future. Listen to Episode 6, ‘Talk Emoji to Me,’ to hear him and other experts discuss what language and communication might look like down the road.