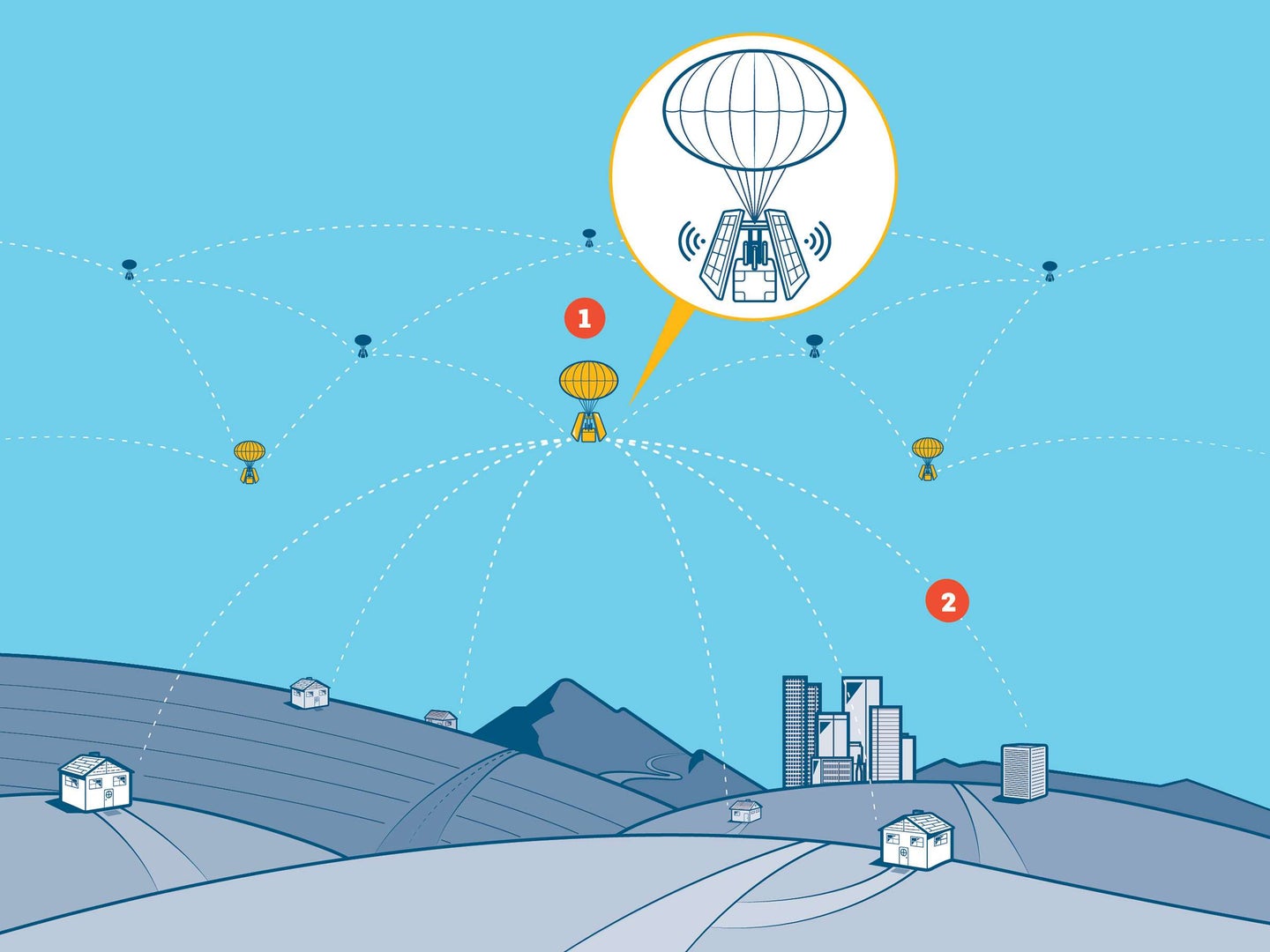 Pervasive as the Internet seems, less than half of the world’s population has access to it, leaving some four billion people unconnected. This spring, engineers at Google’s Project Loon will shift to the next phase in a grand plan to bring Internet to everyone. The goal: a network of high-altitude balloons (Loon is a play off the word) that will rain 4G LTE signals down to anyone with a 4G device. With it, farmers in remote areas will be able to access weather data; rural children will be able to pursue online educations; and Google will have four billion more eyeballs on its search engine. By year’s end, Loon aims to have 100 balloons in the stratosphere, about 12.5 miles overhead.

The balloon is a superpressure envelope–meaning it maintains constant pressure in changing temperatures–made from three-millimeter-thick sheets of polyethylene plastic. Partially inflated with helium for launch, it swells to full size once in the stratosphere. Twelve meters tall, 15 meters in diameter, and built to withstand –117°F temps, it stays afloat for 100 days or more (about three laps around the globe) before engineers bring it down for maintenance.

Solar panels power the elec­tronics (and charge a battery for night use). The electronics box holds a flight computer with navigational algorithms; an altitude-control system; a battery; and a handful of radios and antennas for receiving and relaying 4G LTE signals.

Regional telecoms beam 4G LTE signals to the balloons. Each balloon communicates with dozens of others to form a mesh-like global network, always in motion. A single balloon relays the signal–like a cell tower in the sky–to a ground area many miles in diameter. Download speeds can reach up to 10 megabits per second–about the U.S. national average–to 4G devices. Google had tested the concept with Wi-Fi, but abandoned the plan because it would have meant building a network of ground-based antennas, too. With 4G LTE, people in even the most remote regions can access email and internet on a cell phone alone.

Layers of stratospheric wind move in varying, but predictable, directions. Ground engineers shift the balloon up or down through layers to steer it north, south, east, or west. To lower the balloon, they trigger an onboard pump to draw in air, which is seven times denser than helium. To raise it, they release air. Using algorithms based on National Oceanic and Atmospheric Administration wind-prediction data, they drive the balloon into the current that takes it where needed.