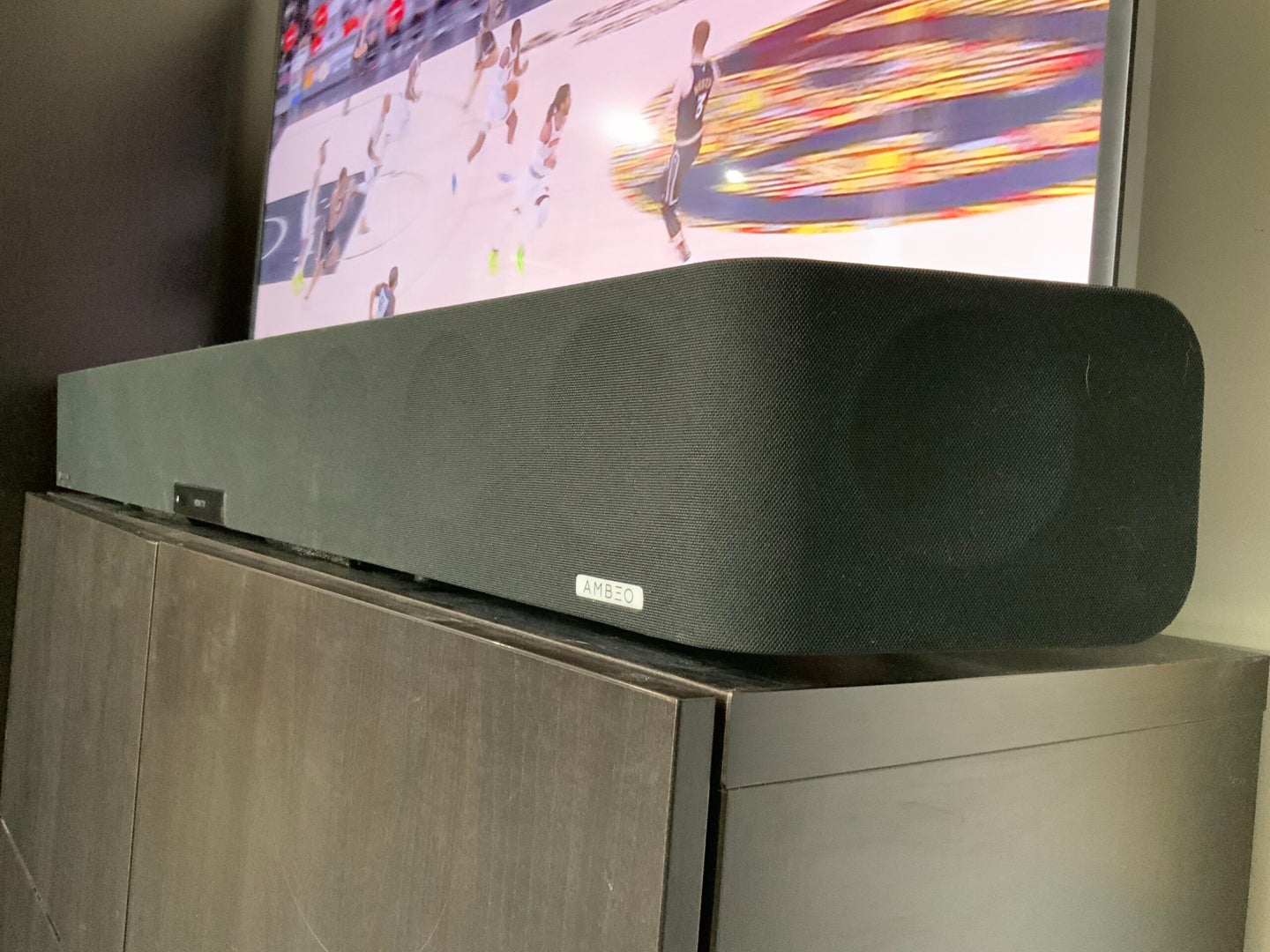 The unfortunate reality of rapidly advancing TV tech is that as screens have gotten flatter, so has the sound they output. That leaves flatscreen owners with a choice: find space for a surround-sound setup with bulky subwoofer and satellite speakers, or turn to single-unit soundbars that can simulate an all-around 5.1 or 7.1 speaker setup without the need for threading wires and installing wall mounts. And thanks to the Sennheiser AMBEO Soundbar SB01, convenience won’t cost you audio quality, though it will cost you $2,499—a major price jump from similar immersion-focused integrated systems like the $999 Vizio Elevate or the Sony HT-A7000. Featuring 13 drivers and the ability to transform any source into 3D audio, this thick slab of sound is for those who want the best soundbar, regardless of price. It’s an investment, but one worthy of the best OLED TVs and best QLED TVs.

Accommodating all those speakers (two firing upward and 11 outward), and the 500 watts of power to drive them, requires considerable size and weight. At almost 41 pounds, 50 inches wide, and more than 5 inches tall (including the rubber feet), the AMBEO is considerably larger than the average soundbar. On the same tabletop as the TV, the Sennheiser soundbar may block a portion of your screen, unless the TV is mounted upon a wall or has a height-adjustable stand.

A small display on the AMBEO’s fabric-covered front face shows basic info, such as input source, volume level, and connectivity status when connected to Bluetooth 4.2 or when Chromecasting from the iOS or Android Google Home app. The brushed metal top panel has an embedded row of essential controls. While, on the back, the Sennheiser AMBEO soundbar SB01 has three HDMI inputs for connecting components like gaming consoles or Blu-ray players, along with an HDMI TV eARC (Audio Return Channel) output for two-way connection to compatible TVs. This means the AMBEO can pass through 4K and HDR (including Dolby Vision) signals from components to the TV. There’s a subwoofer output should you wish to add one to your system, as well as an optical input for digital audio and an RCA audio input. An Ethernet port is there should you prefer a wired connection over the built-in Wi-Fi. The Google Home app performs Chromecasting and any firmware updates, but there is also a USB port solely for performing firmware updates if needed.

Getting started with the Sennheiser AMBEO Soundbar

If your primary setup is source-soundbar-TV, you’ll find everything you need in the Sennheiser AMBEO soundbar box to set up quickly: a standard “figure-8” power cable and a high-speed HDMI cable for an eARC connection for two-way comms with the TV, plus a remote control. The AMBEO may seem like a lot of soundbar (and it is), but it is quite simple to connect to your TV. With my Samsung TV connected in this way, the TV remote would power up and down both the TV and the AMBEO, and the TV remote controlled the AMBEO’s volume while the TV’s internal speakers were bypassed. It’s nice and simple. In the rare case that you don’t have an ARC-compatible TV, you’ll just need to connect an optical audio cable from the TV to the soundbar.

Using the ceiling and walls to reflect sound is key to the Sennheiser AMBEO soundbar’s ability to simulate surround sound, so the “hardest” part of setting up the soundbar is just making sure none of the speakers, including the upfiring ones, are obstructed by anything. Then, before settling in for your new audio experience, you’ll want to optimize the AMBEO’s internal settings for the room with the included stand-up calibration microphone. You plug this into the front of the soundbar, place the microphone where you will most often be while listening to the system (recommended six or more meters away) and, when prompted from the remote, the AMBEO emits a series of loud frequency sweeps to set levels it saves in internal memory. When finished, just store the microphone somewhere so you can repeat the process again if you move the AMBEO—or the sofa.

Unlike a lot of A/V companies, Sennheiser comes to soundbars from a pro-audio perspective. It is decades of engineering studio microphones and audiophile headphones that give the German company the confidence to ask serious coin for the AMBEO. For comparison, Sonos, a much younger company that started in multiroom audio systems, asks just $899 for the Arc, its fidelity-first flagship soundbar with Dolby Atmos and Amazon Alexa.

Considering its price and the pedigree of the 75-year-old brand, the Sennheiser AMBEO soundbar must live or die based on its audio quality and the many ways in which it treats incoming signals to sound like a 5.1.4 surround system (representing two left channels, two right channels, and a center channel; a subwoofer; and four rear channels). In order to do this, the soundbar supports all the major 5.1 and 7.1 surround formats found in legacy movies and games, plus all newer 3D audio ones you’re likely to come across on discs or streaming, including Dolby Atmos; DTS:X; MPEG-H; and even Sony 360 Reality Audio (an April 2021 firmware addition, exhibiting Sennheiser’s desire to futureproof your sizeable investment). But you won’t need to worry about formats for the most part beyond initially setting up HDMI devices. For example, when I connected a Sony PS4 to the AMBEO and chose the audio settings for the game console, it knew the soundbar was compatible with DTS 7.1 and defaulted to that setting.

Set up via room correction, the Sennheiser AMBEO soundbar pumped out detailed, clear audio with excellent definition and separation in the mid- and high-frequency ranges. It also had a very satisfying bass response, reaching down to a thumping 30Hz while maintaining a natural tonality. However, if you’re a real bass addict who needs to feel the kind of guttural quivering inside that you only get from large loudspeakers or subwoofer-reinforced systems, the AMBEO can’t quite compare to that feeling.

For about two weeks, I ran nearly every piece of visual and audio media I played through the AMBEO, including the Netflix Army of the Dead movie and the John Wick franchise (both with Dolby Atmos), the PS4 Middle Earth: Shadow of War game in DTS 7.1 sound, and a selection of 21st-century music with which I am intimately familiar, including hip-hop, pop, and a range of electronic music such as dubstep, house, and indie-dance.

With film, the dialogue was more intelligible, maintaining its presence even as dynamic atmospheres stretched across the room. And directional cues increased the excitement exponentially. In the bathhouse scene of John Wick (2014), there’s a sequence when Wick’s target Iosef runs across the screen behind a series of glass panels, bullets transforming each into a spiderweb of cracks in turn. Hearing the bullets fly in as the sound of their impact radiated out caused my head to involuntarily turn, generating one of those “wow” moments that are rare from all but the best gear. Games exhibited similar spatial depths—sound pinging and panning and the virtual world feeling even more visceral with the AMBEO’s 13 drivers sending sounds flying in all directions.

The Sennheiser AMBEO soundbar treated rumbling sound effects and bass-heavy music equally well—presenting plenty of low-end without distracting from or distorting the overall audio. Playing the squelching symphonics of Daft Punk’s TRON: Legacy Reconfigured on the AMBEO, either from the Bluetooth connection or from streaming apps on the TV or PS4, was a real joy. The soundbar takes two-channel music and parcels it out across its 13 speakers in unexpected and delightful ways. I quickly preferred music through AMBEO virtualization over my dedicated stereo speakers positioned on both sides of the living room.

The soundbar’s sound presets and three “AMBEO” 3D sound modes also made for some interesting listening experimentation, where none of the settings really sounded bad, just different. The presets—Movies, Music, News, Sports, and Neutral—are guidelines for the material you’re hearing, but I tended to prefer the dynamic and vibrant spread of the Music preset even for Movies. However, the Movies setting did tend to emphasize dialogue more, which can be helpful during cacophonous action flicks.

The Sennheiser AMBEO’s 3D modes are where the soundbar really shows off all of its immersive magic. They can be off or on in one of three settings: Light, Standard, and Boost, which determine the intensity of the soundbar’s ability to “upmix” a stereo sound into the illusion of surround. Movie and TV show audio seems to occupy a space from a few feet on either side of the soundbar and even a couple of feet above it due to the top-firing speakers. Different elements of music seem to dance across with audible width. While each setting has its merits, 3D sound is the name of the game here, so I’m fond of the Boost setting, which transformed familiar songs in interesting ways, digitally separating musical elements and stretching them across a tall, wide stage. Though if you’re used to hearing music in a certain way, Standard and Boost may sound somewhat unnatural.

A ’cast of characters

The built-in equalizer, which you can adjust through a companion iOS and Android app, let me crank up the bass for a little extra oomph and to find a personalized sound for my tastes. This is frankly a low-rated app for a number of reasons and the Android app on my Motorola G Stylus phone would not connect to the Sennheiser AMBEO Soundbar, even though it was recognized and working to Chromecast through the Google Home app. However, the iOS app on an iPad did connect and it was worth the hassle in the end to get the graphic equalizer and the easier toggling of AMBEO 3D sound modes. From the app, you can also power the AMBEO on/off, select its input source, and control the volume, although with a finicky touch slider that makes subtle adjustments not so easy.

Sennheiser also offers Google Chromecasting through the AMBEO. Setting this up failed several times, but after some dizzying rounds of rebooting the soundbar and the phone, it did connect for successful Chromecasting over Wi-Fi. However, Google Home noted, “This device [the AMBEO] is not optimized for casting,” and when Chromecasting from the phone, the volume was significantly quieter than when paired over Bluetooth.

So, who should buy the Sennheiser AMBEO Soundbar?

When you want a strong, sumptuous sound for home theater viewing but also want the “simplicity” of an all-in-one soundbar, Sennheiser’s AMBEO Soundbar SB01 succeeds. Its mobile app-based functionality still could use some work, but that’s a minor component of the AMBEO setup. Not only would the Sennheiser soundbar be a surround-sound upgrade from TV speakers or other soundbars, but it can easily serve as the primary music speaker for any room in which you place it. There are many all-in-ones that cost less and take up less space, but for the best multidimensional soundbar experience without sacrificing fidelity, the Sennheiser AMBEO soundbar has set a high bar.