Stream audio to your smart speaker from any device

When you feel more like listening than giving out commands. 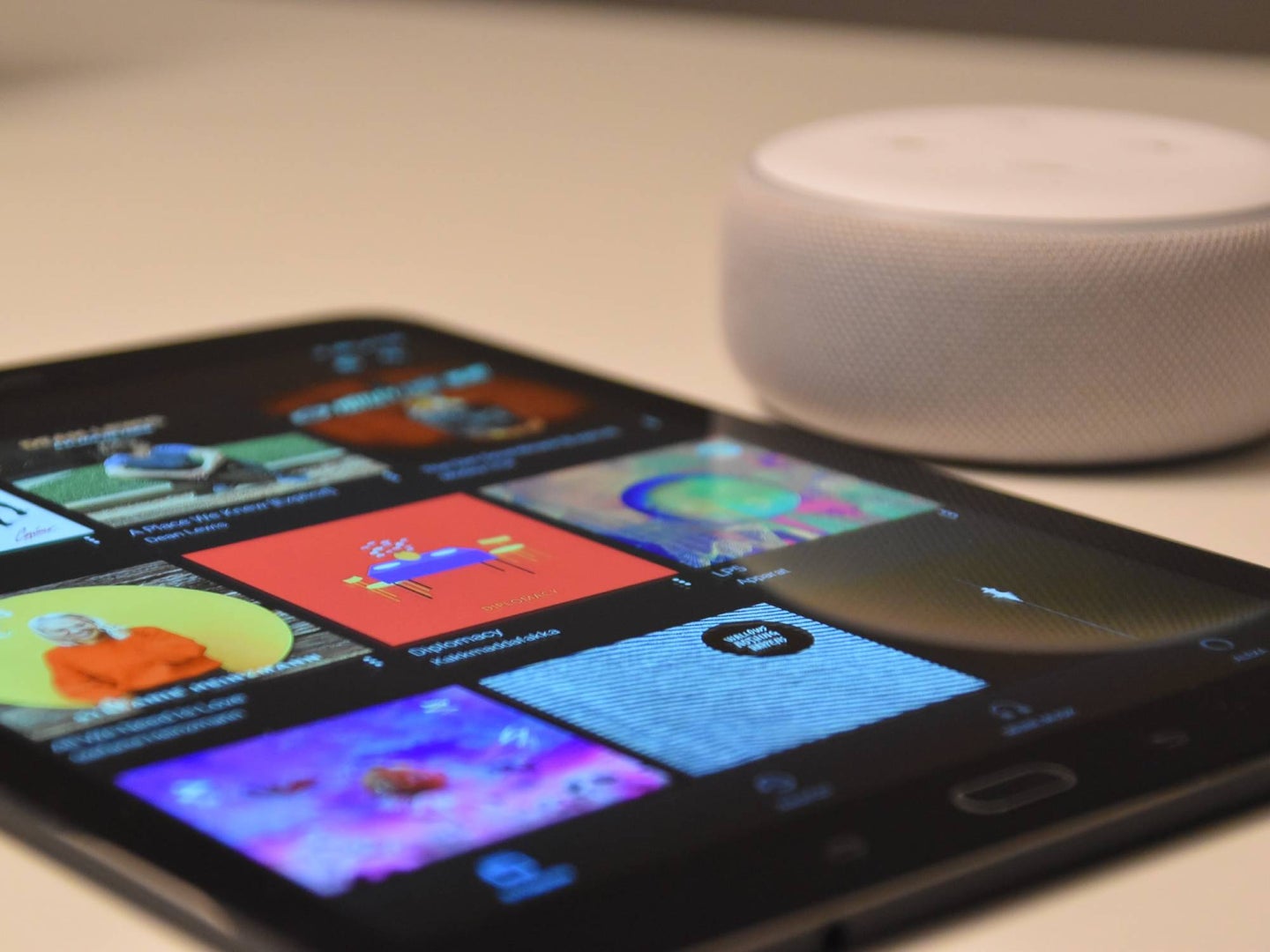 You might be familiar with telling your smart speaker to play tunes with a voice command, but these clever gadgets can also stream audio from other devices, too.

This means you can load up podcasts and playlists more easily on your phone, tablet, or laptop before handing the playback duties over to your smart speaker.

For Spotify users, streaming to an Amazon Echo device is straightforward. The speakers support Spotify Connect, which allows your devices running the music app to see each other and connect automatically when on the same Wi-Fi network, no further setup required.

Open the Spotify app and tap or click the devices button—it looks like a speaker and you can find it to the right of the progress bar on desktop, and at the bottom left corner of the playback screen on mobile. Your Amazon Echo speaker should show up in the list that appears there. Select it to start streaming audio to it and carry on controlling playback from the Spotify app on any of your devices.

Beyond Spotify, Amazon’s apps work very well with Echo speakers. Open up Amazon Music on your laptop or phone, and tap the cast button in the top right corner—it looks like a rectangle with a Wi-Fi signal in the corner. As long as your phone is on the same Wi-Fi network as your Echo speaker, it will show up. Select it to transfer playback to it.

Audible, another Amazon platform, works, too. The only drawback is that you’ll need to go through Alexa on your phone rather than the Audible app to play your audiobooks. Open the app and switch to the Play tab to see your Audible titles. Tap the one you want to play it through your Alexa speaker.

Like the Echo devices, the Google Nest smart speakers are fully paid up members of the Spotify Connect club. Tap the devices button in the Spotify app on any platform, and as long as your Nest speaker is on the same Wi-Fi network, it will appear.

With the smart speaker connected, anything you play through Spotify comes out of the Nest device, whether it’s an album or a podcast. You can carry on controlling playback through the app you were originally using, and change to any devices running your Spotify account at any time.

Another way of streaming audio to Google Nest speakers is to use their abilities as audio-only Chromecasts. Tap the cast button in any app on Android or iOS—the rectangle with the Wi-Fi waves in the corner—and if your Nest is connected to the same Wi-Fi network, you’ll see it on the list and be able to tap on it to select it. Most audio apps on Android and iOS come with Chromecasting capabilities, so you’re well covered. One exception is Apple Music on iOS, although Apple Music’s Android app does support the Chromecast standard.

Chromecasting from Windows and macOS is less straightforward, though you’ll be able to cast any audio you can load up in a Chrome web browser tab. Click the three dots to the top right, then select Cast to send the audio from the tab over to your Nest speaker. This works for the YouTube Music web app, for example.

As with the Echo speakers, Bluetooth is also an option. To enable this on a Nest speaker, open the Google Home app on your phone, tap the speaker and the cog icon, and then choose Audio, Paired Bluetooth devices, and Enable pairing mode. Depending on your device, you can then open Connected devices (Android Settings), Bluetooth (iOS Settings), Devices and Bluetooth & other devices (Windows Settings), or Bluetooth (macOS System Preferences) to connect a phone, tablet, or computer and stream audio from it.

The Apple HomePod is more limited than Amazon’s and Google’s speakers in terms of ways to connect to it. The best way of streaming audio to a HomePod is via Apple’s own AirPlay technology. This is easy to do from any device made by the company, but it means gadgets running Android and Windows are left out.

If you’re on an iPhone or iPad, swipe down from the top right corner of the screen to open up Control Center, then tap the audio playback controls (top right) and the AirPlay button (an arrow pointing into a group of circular rings). Tap the AirPlay button again, and as long as your HomePod is on the same Wi-Fi network, it will show up as an output option.

Another alternative is to simply tap your iPhone or iPad on top of the HomePod to send the audio over. For this to work, Bluetooth needs to be enabled on the iPhone or iPad, and the devices must be on the same Wi-Fi network as the HomePod. You also need to check that Transfer to HomePod is turned on in General, AirPlay & Handoff in the Settings for iOS or iPadOS.

[Related: Apple’s HomePod is officially discontinued. Here are the smart speakers you should buy instead.]

The process is pretty simple on a Mac, too. From the Apple menu, click System Preferences, Sound, and Output, then choose the HomePod from the list of device options. Once the connection is complete, any audio that you play in any app on your Apple device will stream through the HomePod speaker.

The HomePod doesn’t support Bluetooth connections or any other protocols such as Google’s Chromecast one, so for now you’re stuck if you’re trying to stream audio from an app on Android or Windows, or from any other device. The HomePod doesn’t support Spotify Connect either, though you can stream audio from Spotify on an iPhone, iPad, or Mac through AirPlay.