Compact but competent, the new Pioneer DJ VM-50 wants to add a boost to bedroom studios. 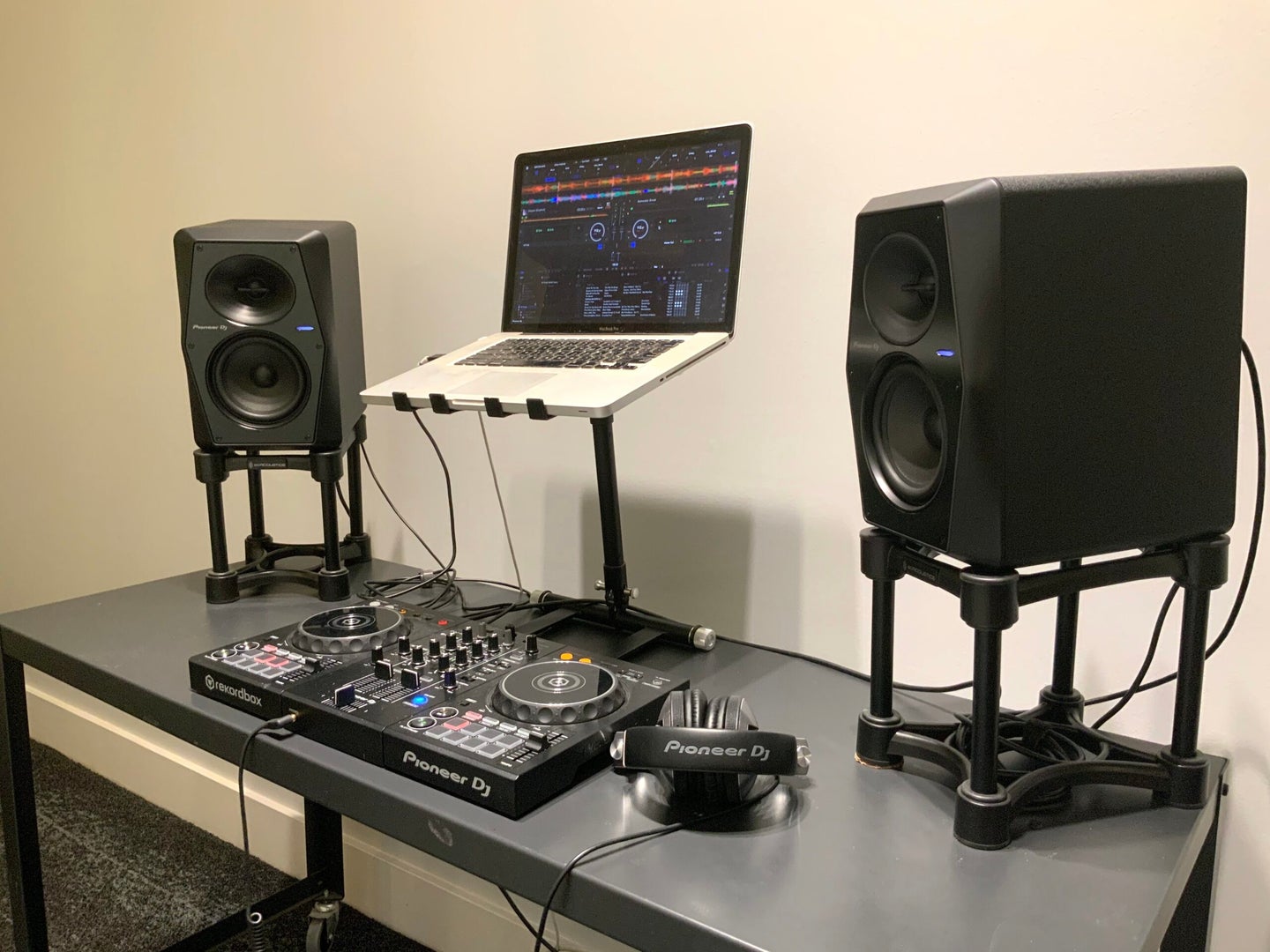 The Pioneer VM-50 active studio monitors help you find the room in your mix without forcing you to find a lot of space in the house. Markkus Rovito
SHARE

Ask any club or festival DJ if they’re familiar with the Pioneer DJ brand and the answer will almost certainly be yes. The Pioneer CDJ digital media players have become as ubiquitous as turntables in DJ booths everywhere and are often accompanied by other Pioneer DJ equipment including mixers and controllers. Now Pioneer DJ has studio monitors to complement its other gear, which includes everything from headphones to PA speakers to samplers and synthesizers for music production. Pioneer DJ’s newest active monitor speakers include the Pioneer DJ VM-50 ($169 each, featuring a 5.25-inch woofer), VM-70 ($229 each, featuring a 6.5-inch woofer), and VM-80 ($289 each, featuring an 8-inch woofer). They are worthy candidates for your home-based music production and/or DJ setup, but to become as essential as the CDJs found worldwide would take something exceedingly special. Let’s see if the VM-50 can stand out in a market as crowded as a peak-hour dancefloor on Saturday night.

What are the Pioneer DJ VM-50 monitors?

Pioneer DJ’s VM series is a pro-focused range of monitors in a product line that also includes the studio-grade RM-05 5-inch monitor and prosumer DM-40 and DM-40BT (a Bluetooth-enabled model) 4-inch desktop speakers. The VM Series are powered monitors, meaning that they do not need an external amplifier to operate, just a clean power source for the integrated Class D amplifier, which promises to deliver a 40Hz to 36kHz frequency response.

Each of the VM series monitors has the same features except for their size and audio output wattage. The VM-50, which is the only one of the series that’s also available in white, offers 60W of total power from its bi-amped configuration: 30W for the low-frequency driver (woofer) and 30W for the high-frequency driver (tweeter). It also has a maximum peak output of 107dB. By comparison, the VM-70 has an output of 100W and 112dB, while the VM-80 delivers 120W and 115dB.

By and large, the VM-50 looks quite similar to comparable studio monitors. If you expect much from a studio monitor beyond a black (or brown, maybe white) rectangle, you’re going to be disappointed. But there are a couple of design elements that distinguish it from others and which may or may not have an effect on the speaker’s sound. Immediately noticeable, an oblong, hexagonal brushed aluminum 4mm-thick front baffle plate characterizes the VM-50’s appearance. Pioneer DJ claims that the baffle helps suppress vibrations and resonances to recreate authentic sound.

Most studio monitors have some sort of tube for air flow that assists in reproducing the low bass frequencies. Some popular monitor lines, like the KRK Rokit and the Kali Audio LP, have front-facing ports, while many others, including the VM-50, have rear-facing ports (in this case located above the connection and control panels). Pioneer DJ calls its variation of this port the Vortex Bass Accelerator and claims that its free-flowing air keeps the bass punchy and free from unwanted vibrations and distortion. It’s important to remember when you’ve got a speaker with a rear port, you don’t want to place the speakers too close to a wall or you’ll experience boominess.

One last VM-50 distinction is also unusual among studio monitors. The edges of the soft dome tweeter’s “constant directivity horn” and the Aramid fiber woofer cone are of equal width. Pioneer DJ claims that this shaped design is to “enable smooth frequency crossover and a natural sound.” The results of my listening tests did find a flat frequency response and broad soundfield falling in line with that statement, whether or not it has anything to do with that particular design element.

Setting up the Pioneer DJ VM-50

Each VM-50 monitor includes a standard three-prong AC power cable. For connecting audio sources, you have a balanced combo input for either XLR or TRS (¼-inch) cables and an unbalanced input for RCA cables. Just having inputs for all three of those cable types should be a standard monitor feature, yet a surprising number of studio monitors leave out either the RCA or the TRS connectivity, so that’s a plus for the VM-50.

Once everything is connected and powered on, the VM-50 offers internal 96kHz digital signal processing for both the low and high frequencies. These EQ settings are meant for compensating for the speakers’ placement in a room, the room’s reverberation, or for personal preference. The Low EQ settings are Room 1, Flat, Room 2, and Club Bass (offering a bump at 50Hz), while the similar High EQ settings include Room 1, Flat, Room 2, and Bright Treble (nudging the 4kHz and 8kHz regions). These settings apply different frequency boost or gain settings and both the Low and High settings include basically one attenuation curve, one neutral setting, one heavy boost curve, and one more subtle boost curve. Purists beware, the digital filters can’t be bypassed, but there isn’t limiting in the signal chain and the Flat settings aren’t overly sculpted—plus the tone control flexibility is nice because no rooms, or ears, are the same. The VM-50 manual offers more information on determining which settings best suit your setup.

Can these monitors keep the beat?

To test a pair of VM-50 monitors, I used them to DJ some of my favorite dance music from 2021, as well as a set of classic ’80s dance tunes, and used them for monitoring my own original music production. I also listened to a lot of 2000s hip-hop like T.I. and OutKast, 2010s electronic music such as The Glitch Mob and Deadmau5, and new indie-pop like Bombay Bicycle Club and Grimes. Playback was in an open loft space I regularly use for livestream DJing and fiddling with electronic music, and I fed these tracks from my laptop using a Pioneer DJ DDJ-400 rekordbox controller I already had. I also compared the VM-50 to a number of other monitor pairs both larger and smaller than the VM-50: the Adam Audio T8V 8-inch monitors, the KRK Rokit 6 6-inch monitors, and Pioneer DJ’s own DM-40BT 4-inch monitors.

With studio monitors, the “sweet spot” where you’re listening—the focal point between the speakers where stereo mixes just right—is very important. The VM-50 sets up an excellent triangle where the mid-range frequencies—like certain vocals, guitars, and synthesizers—sound exceptionally crisp, clear, and detailed and the high-end sounds are sharp, but not spikes (which can manifest in certain monitors such as the Yamaha HS series). The “Bright Treble” EQ setting on the VM-50 did make really chirpy elements in some songs sound somewhat harsh, but the Flat setting for High EQ sounded just right for most occasions.

Did these speakers get my first pumping?

Not surprisingly, the larger Rokit 6 and T8V monitors are quite noticeably bassier than the VM-50, even with Pioneer DJ’s “Club Bass” EQ setting engaged. But that’s to be expected because, with the smaller 5.25-inch woofer, the VM-50 can’t push as much air physically to get the same bass response as larger monitors. The Rokit 6s are also known for having a bassy bias to them, and both the Rokit 6s and the T8Vs have a lower frequency response and more power allocated to their woofer than the VM-50 woofer’s 30W. The VM-50’s bass was clean and correct, but doesn’t punch like some.

With all that said, listening on the VM-50s to bass-heavy music with vocals, such as 2000s-era trap, was a great experience because the vocals sound so distinct, and even details like the claps sound finely detailed. Low-end elements like kick drums and bass lines still come through the mix, which overall reproduces the full picture of the source material with excellent separation of the frequency ranges and a very well-defined stereo image.

All of that is especially important when you’re DJing and mixing elements of two or more songs together. In those moments, the VM-50 made it easy to hear a very clear representation of how the different parts of each track were fitting together. But if you’re like me—in that you like the bass to cause a little rumble in your chest—the VM-70 and VM-80 both have progressively lower frequency responses and more wattage in their low-frequency drivers, so these may be better choices if you have space and budget for them.

Compared to the smaller DM-40BT monitors, the VM-50 has a very similar sound but puts out much higher relative volumes. With 107dB of peak sound, the VM-50s can get plenty loud for your ears to handle; however, somewhere in the upper end of its volume range some distortion creeps in when you crank them way up, so extreme volume levels aren’t ideal for when accuracy is of the utmost importance. Again, if you really need to monitor music at high levels for extended periods (if your monitors are in a DJ Booth actively competing with a PA system, for instance), go for a larger-sized monitor, which should be more capable of producing those volumes with the full clarity of sound.

So, who should buy the Pioneer DJ VM-50?

Enthusiasts of Pioneer DJ equipment in need of reasonably loud, flatly tuned studio monitors for their home studio or practice space could check out the VM-50s just because they’re small, professional monitors that deliver a tight sound at a little over $300 a pair. And they happen to look well-matched with the Pioneer DJ CDJs, mixers, and all-in-one DJ systems. Particularly if you’re using the white CDJ-3000s or white XDJ-RX2 all-in-one DJ system, pairing it with the white VM-50 monitors could not look much cooler for your livestreams.

The VM-50 active monitor speakers are not likely to take over and dominate their product category the way that Pioneer DJ’s CDJ media players have for club DJing, because there’s simply too much excellent competition for comparable monitors from companies like JBL, KRK, Kali Audio, and others. However, for their size and attractive price, the VM-50s offers a satisfying dynamic range at moderate volumes for music creation and DJ sets, as well as casual listening.