This Is What Happens When Augmented Reality Takes Over 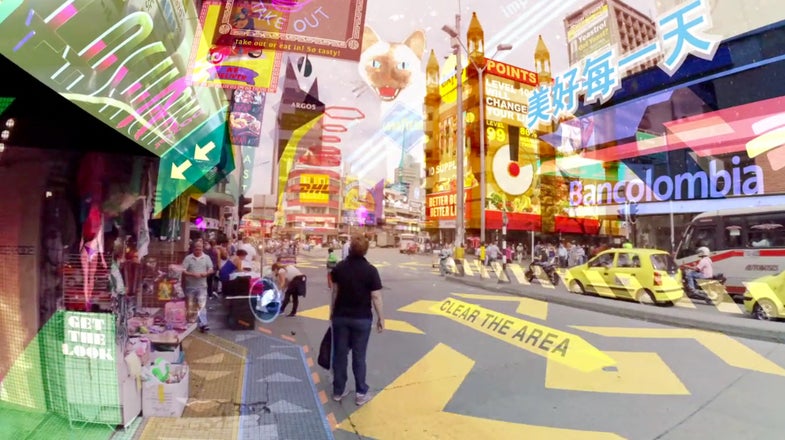 “Augmented reality” is a phrase that you’ve probably come across if you read Popular Science. It’s kind of a loose, ill-fitting blanket term, but it basically refers to technologies that layer digital images and information over a person’s view of the real world (instead of virtual reality, which cuts you off from the real world and replaces it with an entirely virtual one). Companies like Microsoft and Google are putting millions of dollars into this tech, and Snapchat already kind of has it in the form of the “Lenses,” those weird filters that let users distort their faces with funny (sometimes racist) digital costuming.

But what happens when augmented reality goes from a novelty to ubiquity? The results are pretty manic and overwhelming, as depicted in Hyper-Reality, a new short film by designer Keiichi Matsuda. Imagine if the pop-up ads and spam that you see across the web were able to infiltrate every corner of the real world. That’s basically what this film envisions is in store for us, as seen through the eyes of a tragic main character named Juliana Restrepo, who’s just trying to go about her lowly job and keep hold of her digital loyalty points. On the plus(?) side of things, by the time this type of future comes to pass, we all may be blind.