Why Did I Implant A Chip In My Hand? 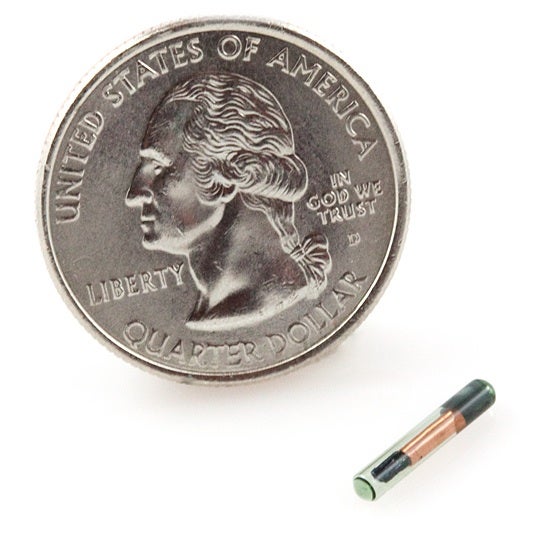 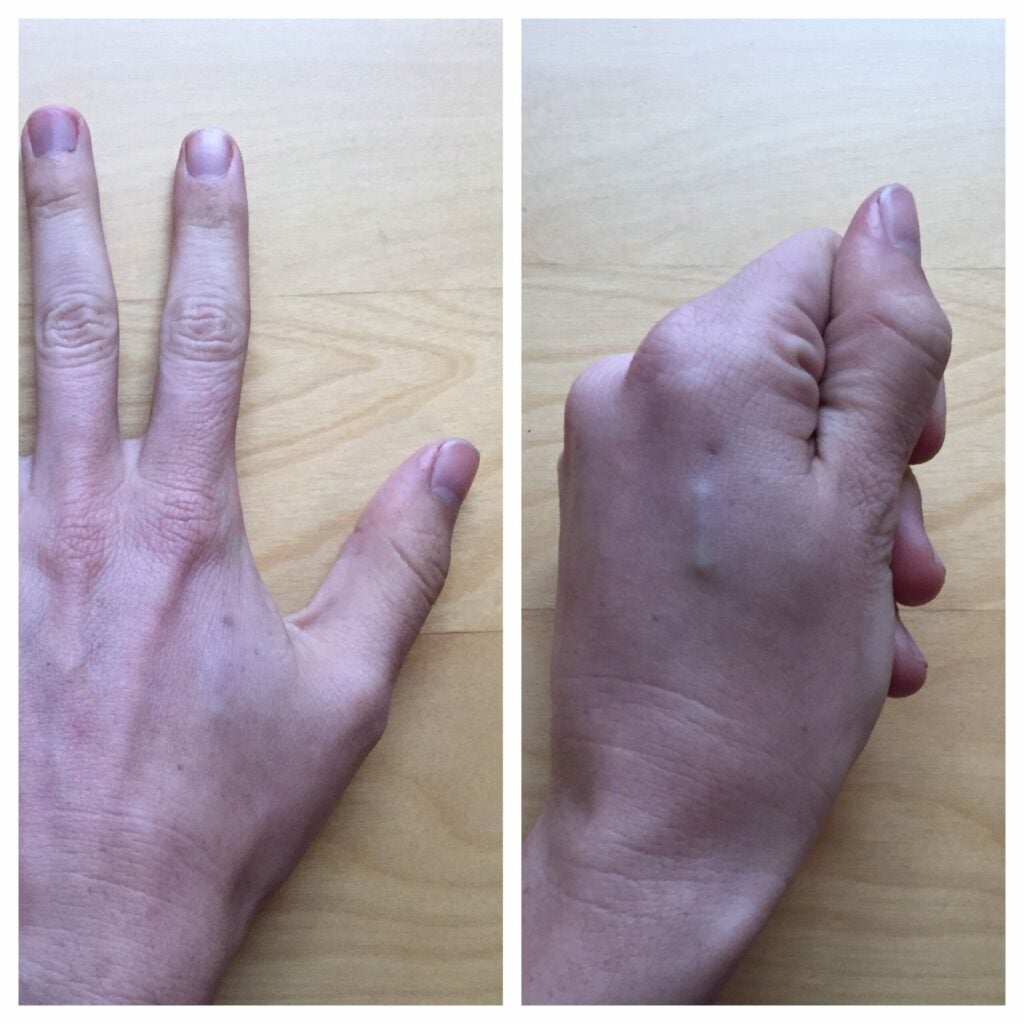 The author’s implanted RFID chip is hard to see when her hand is at rest (left), but stands out against the skin when she squeezes her fingers together (right). The small dot above the chip marks the site, now healed, where it was implanted a few months ago.

A few months ago, in the expo-hall of the Austin Convention Center, I laid my left hand flat on a sheet of sterile paper and let a very tall, friendly man insert an RFID chip into the space between my thumb and index finger. “Oh, you’ve got thick skin,” he said, pressing the needle a little harder. I made a half-hearted joke about being a woman on the internet, and the whole thing was over.

Today, the tiny scab has healed, and the device sits just below the surface of my skin, where it looks like a little pill poking up out of my hand. Often, when I tell people I have an RFID chip, they react with confusion and a tiny drop of horror. “You have a what? Why?” Then they want to touch the little bead through my skin — if I squeeze my thumb and pinky together you can see the bulge and feel its hard exterior.

What they’re touching is a passive, near-field communication (NFC) chip encased in glass. It’s likely that you’ve used a chip like this recently, if you’ve had to tap a fob to a keycard reader at your office, or if you’ve held your phone near a card reader to pay for something. If you have a pet with a microchip, you’re living with an animal that has the same technology that’s in my hand.

An implantable RFID chip from the Dangerous Things online store, next to a quarter for scale

The place that most people buy RFID chips like this, designed for human implantation, is Dangerous Things, an online store that sells four different implantable transponders. Its founder, Amal Graafstra, is the tall man who implanted mine. Dangerous Things has sold several thousand of these implants to bodyhackers all over the world, who use them for everything from opening the doors to their homes and offices, to unlocking their cars, to fun projects like auto-displaying GIFs on a phone or marking a geocache. The chip can also store information and (if a chip reader is placed really close to it) transmit that data.

The most common question I get about the implant (aside from “why would you do that?”) is whether I’m being tracked. The short answer is no. RFID chips aren’t that powerful. Think again of your office keycard: If you’ve ever had trouble getting it to work through a bag or wallet, you know that these chips aren’t good at transmitting through anything, let alone over long distances. My chip certainly can’t talk to a satellite. Just like your dog’s microchip can’t locate her when she runs away, my RFID chip couldn’t tell anybody where I am—even if I wanted it to. And that’s not the only limitation my implant has.

Right now, most systems aren’t designed to work with independent NFC chips. For example, iPhones don’t allow you to use the built-in NFC reader for anything other than Apple Pay, which means I can’t use my implant to unlock my iPhone. I can, however, unlock my partner’s Android, a fun party trick I use to show people that yes, this little glass device in my hand does do something. And to snoop on him. (Just kidding, I don’t snoop on him.)

Some people also seem to think that my hand can now unlock any door it encounters. That’s not true either—your office key doesn’t open the neighboring building’s doors, and neither does my hand. To use my RFID chip, I need to control both sides of the system. Graafstra, for example, programmed the implant in his left hand to unlock the doors of his car and house. (I don’t have a car, and I rent my apartment so I’m not about to install a custom lock on our door, but that’s not the RFID chip’s fault.)

So my implant is both less scary and less useful than you might think. Even its ability to store information is limited. My chip can store just over 1000 bytes of memory. To put that into perspective, a document containing just 100 characters takes up 800 bytes. My chip, in other words, can store just about a single Tweet. Those 1000 bytes may not serve as helpful storage—but they can still do a whole lot of other things. 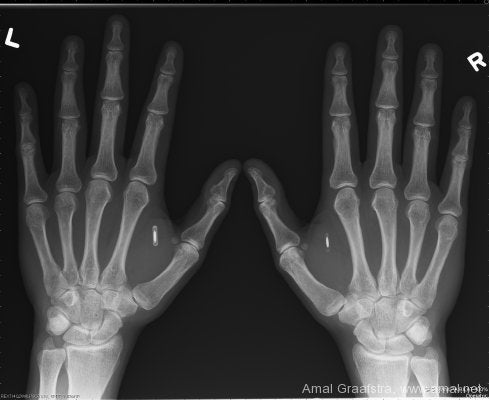 This x-ray image of biohacker Amal Graafstra’s hands reveals the RFID chips implanted in them.

In 2002, long before I had even heard of RFID implants, the Canadian artist Nancy Nisbet wanted to use the chip to track her internet use. Her plan was put an RFID reader in her mouse, and to use one hand when she was browsing for fun, and the other when she was working. The mouse would pick up how often the chips in her hands were used, and break down how often she was working or playing online.

More recently, people have used NFC chips to unlock their computers. One artist has coded a (very simple) GIF into his implant, and when he scans it with his Android phone, the animation pops up. Another person has turned their chip into a geocaching site. People have attempted to use the chips for darker things too. This hacker claims he can send malware to someone’s phone by holding it in his chipped hand.

These are fun, goofy things to do with the implant. But in theory, the possibilities are far grander and more useful. I could connect it to my bank account and use it to pay at the grocery store. I could connect it to my transit card and use it to get into certain subway systems. The problem is, these systems aren’t designed to work with my rogue implant—which makes sense. So few people have chips in their hands that it’s inefficient to design around them. And these RFID chips aren’t regulated or controlled, so in theory someone could put nefarious things on their chip and corrupt a system. And by the time grocery and subway scanners allow access to outside NFC chips, I’ll likely have to upgrade my implant to a new version.

I’m not complaining. I knew the chip wouldn’t be able to do much when I got it, and I’m planning on doing some more experiments with it: I don’t like strangers enough to want my hand to be a geocaching site, but I am planning on trying to retrofit my bike lock to open without a key, and I’m currently choosing what kind of GIF to call up when I grab my partner’s phone and perform my new cyborg party trick. But for now, it’s mostly just a funny bulge in my hand.