The Predator Helios 7000 has powerful guts that it can show off under a glass panel. 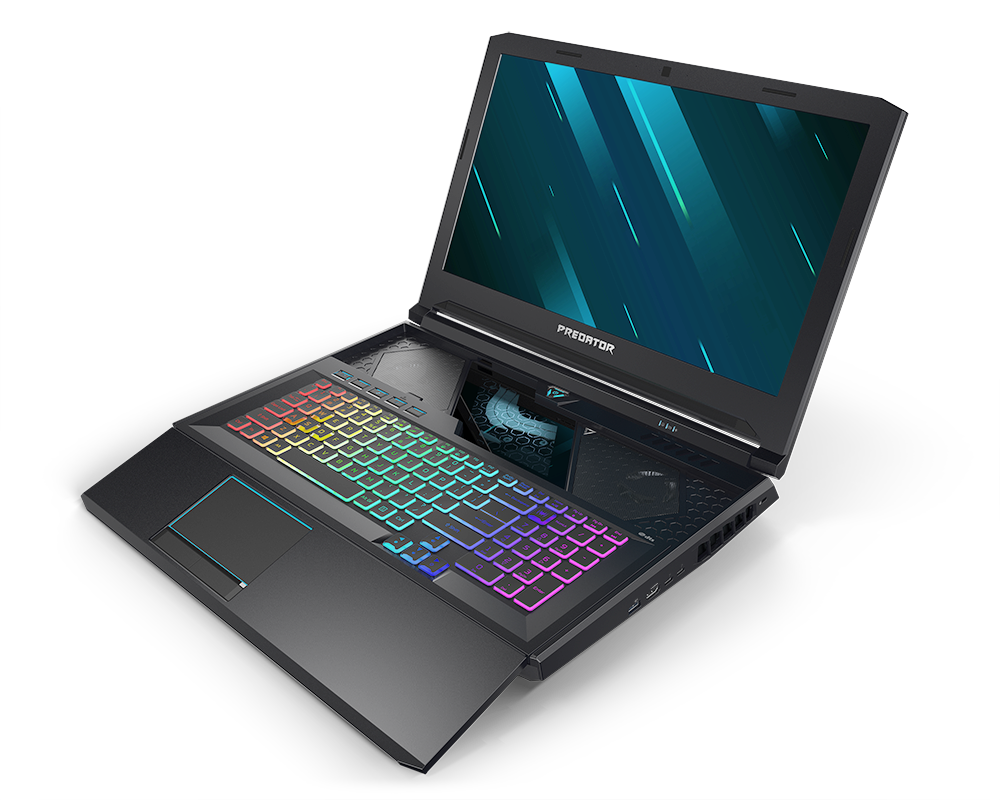 Two extra vents appear from under the keyboard for extra cooling. Acer
SHARE

Gaming laptops run hot. They consume a lot more power than a typical machine built for Microsoft Word and doomscrolling through social media. Because of all that heat, cooling systems can make a huge difference when it comes to a machine’s overall performance. With its flagship Predator Helios 700 laptop, however, Acer has given the laptop’s internal cooling system a featured spot so that users can actually see and appreciate it.

The HyperDrift keyboard debuted on the previous Predator Helios model, which got some considerable hardware updates today. In its standard position, the keyboard looks as you’d expect. Sliding it toward you, however, moves the wrist rests and touchpad into an angled position and reveals a glass panel under which the cooling system resides.

The whole computer is built with gamers in mind, so it’s laden with RGB lighting and the WASD keys (which gamers used to move their characters around on-screen) employ a different kind of switch underneath. Acer’s Linear Switches are pressure sensitive, so a button-press can have a different effect depending on how much pressure you apply. So, if you prefer a light touch over mashing buttons, you can adjust the sensitivity of your keys to meet that need.

Gaming laptop makers love flourishes, however, and the glass panel revealed by sliding the keyboard is a truly unique element. The panel itself is made of Corning’s Gorilla Glass, which you’ll often find in phone screens. Underneath, you’ll find the machine’s cooling system, which includes three copper heat pipes, a vapor chamber, and intricate fans that pump heat away from critical components.

Heat pipes and vapor chambers serve similar purposes—they contain a liquid material inside that evaporates as it heats up, then moves quickly through a vacuum-sealed enclosure before condensing and recirculating again. This process pulls heat away from the components—the silicon chips—that need to do the number crunching in order to make the whole computer work.

While the visible components are a fun flex, sliding the keyboard forward also opens up additional vents near the screen to let more heat escape and, presumably, improve performance even more.

For additional cooling action, Acer has implemented its new PowerGem tech, which it vaguely debuted last fall. Typical CPUs sit under a layer of thermal paste designed to pull heat away from the chip to prevent it from overheating and slowing down. The PowerGem, however, is a pad made of a material that Acer claims conducts heat nearly four times better than copper. That kind of efficiency bump could be enough to add more than a 12 percent performance increase to a CPU.

From a specification standpoint, the 2020 Helios 700 offers either a Core i7-1075H or Core i9-10980HK processor, both of which come from Intel’s 10th generation chips. As for GPUs, you can choose from an RTX 2080 Super or an RTX 2070 Super. With that much computing firepower happening inside, it’s clear why Acer put so much effort into its cooling tech—it doesn’t want your computer to melt through your desk mid-gaming session.

In addition to its gaming PC updates today, Acer also announced a gaming chair designed in conjunction with massage chair maker, Osim. The Predator Gaming Chair x OSIM has three preset programs and moving parts that will rub your back and shoulders as you game. It’s due out later this year and will likely set you back serious cash.