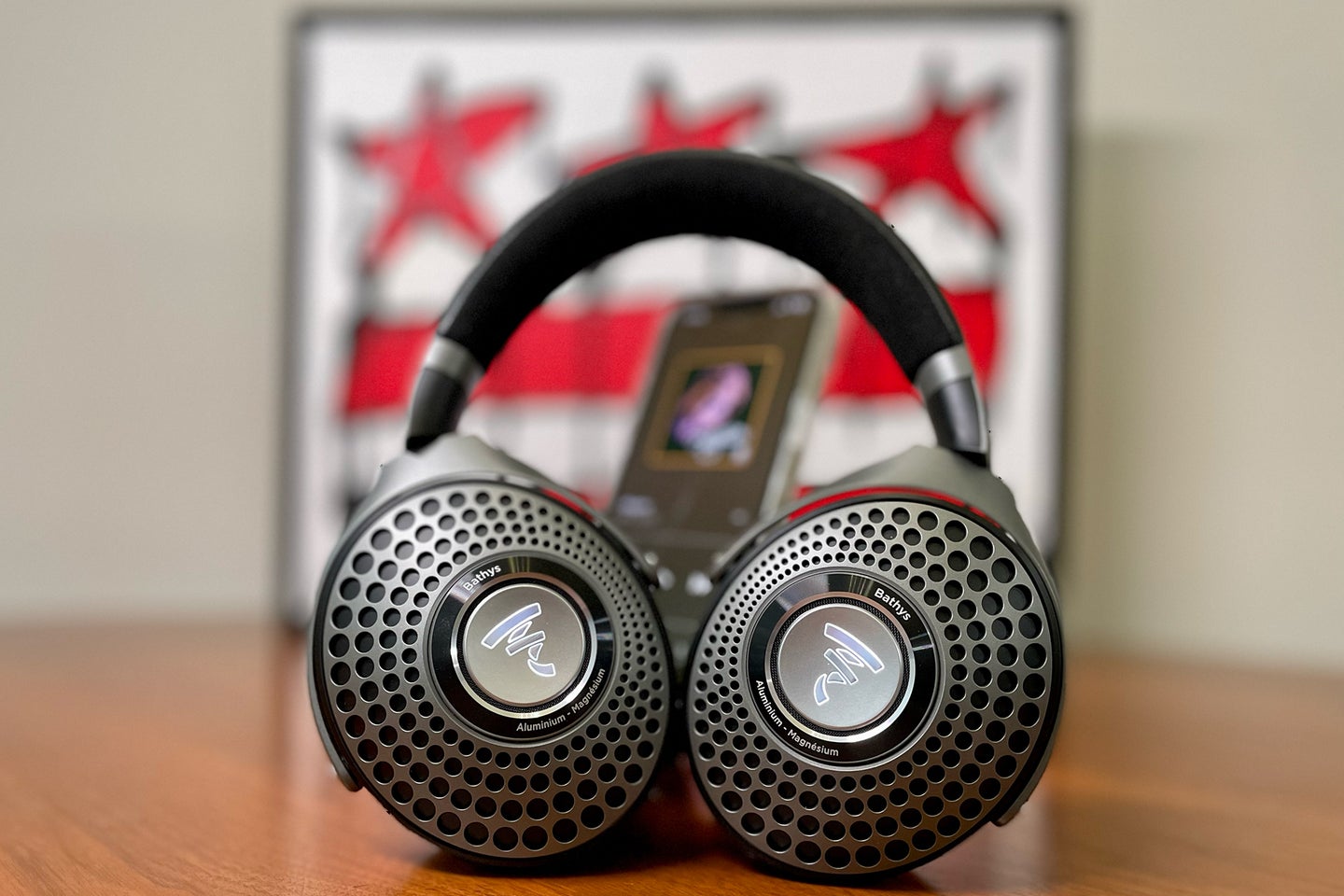 Submerge yourself in sound without capturing yourself in cords with the Focal Bathys wireless headphones. Tony Ware
SHARE

The Focal Bathys is a first and yet another. It’s something fresh and familiar. It’s more connected and less tethered. It’s a French luxury audio manufacturer’s entry into wireless noise-cancellation headphones and it carries with it well-established design language and previously unseen features. The Focal Bathys is $799 and a (relative) value if you’re shopping for a sonic travel companion that puts fidelity first.

The Bathys is not Focal’s first Bluetooth headphones—that would be the 2017’s Listen, by far the most casual headphone the company has produced. It is, however, Focal’s first active noise-canceling headphones, and its first premier wireless product sharing DNA with the company’s high-end headphones.

Focal has cultivated its polished aesthetic, and the Bathys looks of its lineage. Open up the triangular hardshell case—the kind of onigiri-shaped accessory increasingly common for lay-flat but not folding headphones like the Bathys—and you’re greeted by a black-silver finish with magnesium yokes and leather headband accents, which are typical Focal touches. Concentric circles dotting the outer grilles are unmistakably Focal for anyone that has auditioned award-winning, opulent models such as the Stellia, and there are zero touch controls, as you might expect from a textured surface. Instead, physical buttons/toggles ringing the earcups handle ON/DAC/OFF modes, Bluetooth pairing, volume, pause/play/skip, ANC/Transparency, and taking calls/voice assistant activation. Closer examination reveals that geometric array, and the baskets beneath plus the headband attached, feature plastic, not just metal and leather like the Stellia. But you can’t realistically expect a suspension system built like a $2,999 flagship and the Bathys is plenty sturdy, plus any saved heft—the headphones weigh in at 350g or so, comfortable but still above the competition—is worth the sacrifice in a portable. Another distinction: the flame branding found on all Focal headphones glows white when the Bathys is active (though this can be dimmed or toggled off in the newly updated Focal & Naim app).

Within this spherical shield is a 40mm aluminum-magnesium “M”-shaped dome driver originating from the same Saint-Étienne, France, facility as the Bathy’s closed-back cousin the Celestee ($999), among other models up to and including the limited-edition Bentley co-branded Radiance (originally $1,299) and the Utopia ($4,999 and our best overall headphone). Earcups on the Bathys are around 20% smaller than those of its wired at-home use brethren, however, which required Focal to develop a new magnet/motor system. The Bathys isn’t low-profile, by any means—there’s more than enough room for my ears, which quickly get hot spots under tight circumstances—but it’s as compact and demure as Focals get. Thankfully, efficiency doesn’t come at the expense of expression.

Dynamic but disciplined. Reactive but refined. More kick without a loss of control. Transients have excellent pacing without being piercing and there’s decay with no delay. With the implementation of a driver derived from the Celestee and Radiance, the Bathys has a proven platform and it executes it with aplomb, tweaking things slightly to compensate for commuting, etc. Bass balances density and definition, perhaps with low-end exceeding “audiophile” limits but doing so articulately in a way that’s never obtrusive. Riding that punchy band is a midrange with plenty of energy and timbral accuracy. Upper midrange might be slightly dipped into elevated lower-mid treble, but it comes across as presence with a purpose rather than a search for artificial airiness. And there are no fatiguing top-end flare-ups, which is great if you need a little extra volume in loud environments. The soundstage leans toward intimacy, but not congestion—imaging is precise, and there’s just a touch more depth than width.

With a published frequency response of 15Hz-22kHz, the Bathys gives you everything in proportion, prioritizing musicality. Want more or less slam or sparkle? The Focal & Naim app includes a 5-band EQ that lets you tweak 62Hz/250Hz/1kHz/4kHz/16kHz in .5 dB increments to +/- 6 dB, and custom settings are saved to the headphone. The EQ, however, only works via Bluetooth—but all these impressions are wireless and with ANC, which is always on to some extent, which makes the consistently impactful yet never exaggerated sound signature especially impressive. Featuring Bluetooth 5.1 (with the SBC, AAC, aptX/aptX HD/Adaptive codecs plus multipoint support), the Bathys maintains its rhythm when you need to bounce.

Looking to maximize resolution? Moving from AAC to aptX HD/Adaptive saw a slight uptick in detail, but the real differentiator is the built-in 24-bit/192 kHz DAC, which works with computers and mobile devices via USB-C. Yes, you’re using a wire with wireless headphones, but there are times when you really want to take advantage of the full potential of lossless streaming/files and the difference is audible. There’s even the option to plug in via analog 3.5mm, but the responsiveness of the Bathys’ driver to a “simple” Bluetooth signal really diminishes much of the value of lugging around any type of amp. And all of this performance is available for 30 hours on Bluetooth, up to 42 hours on USB (with fast-charging allowing five hours of playback after just 15 minutes).

It takes technical prowess to achieve what the Focal Bathys excels at: making me forget about the means as I enjoy the music. The ANC isn’t on par with a sector leader like the Sony WH-1000XM5, and the user experience isn’t as seamless as, say, an iPhone 14 with the AirPods Max. But there really hasn’t been a moment where I felt compelled to lament Bluetooth’s limitations, which is not how I’ve always felt about wireless headphones. The Bathy’s pads are comfortable and isolating, while the noise cancellation is woven intuitively, assuredly into the dexterous driver’s innately rich frequency response. With the Bowers & Wilkins Px8 now released, there are accomplished competitors in the rarefied air around this price point (check back for hands-on impressions of that model soon). But whether as entry point or accompaniment to Focal’s formidable lineup, the Bathys is worth sinking your time (and money) into if you love a fluid listening experience.