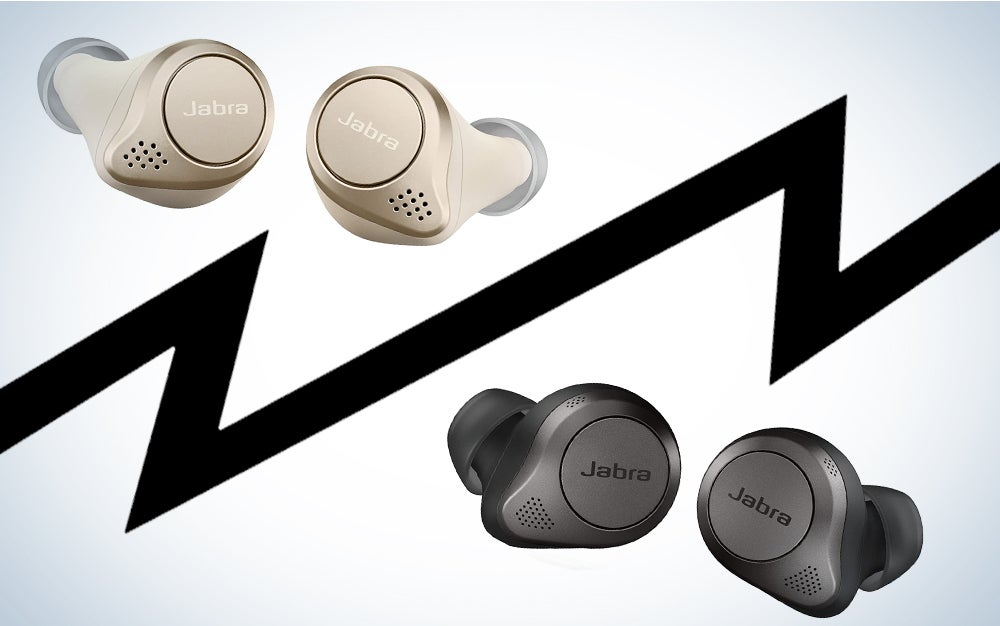 Jabra Elite 75t vs Elite 85t: Which noise-cancelling earbud is best for you?

We compare the Jabra Elite 75t vs. Elite 85t to find the best wireless earbuds for active and executive users.

Founded in 1983, audio company Jabra first established itself as a manufacturer of hands-free business headsets before jumping into the mobile Bluetooth headset market in the early 2000s. Since then, Jabra has become popular outside of the office for Bluetooth headphones and earbuds engineered with innovative noise-canceling tech, impressive battery life, and intuitive app controls. The Elite 75t ($149) and Elite 85t ($229) are Jabra’s newest and most compact true wireless earbuds yet. And while the two look similar and share many of the same features, each is better suited for meeting the needs of a different user. If you’re looking for a new set of lightweight, high-tech, customizable earbuds to keep you connected on the move, keep reading as we put the Jabra Elite 75t vs. Elite 85t to help determine the best noise-cancelling earbuds for you.

The Elite 75t and Elite 85t are both very compact, with each earbud weighing in at 5.5g for the Elite 75t and 7g for the Elite 85t. This, paired with their long battery life and compact charging cases, makes them a suitable option for users with active lifestyles and a good alternative to products like the $249 Apple AirPods Pro. The Jabras boast Bluetooth 5.0 (SBC, AAC) to transmit the full 20Hz to 20kHz musical spectrum in a range up to 33 feet. They’re also voice assistant-enabled for both Siri and Google Assistant.

With active noise cancellation (ANC) turned off and counting fast charges from the case (15 minutes gets you an hour of use), the Elite 75t can go up to 28 hours before having to be plugged in. The Elite 85t boosts that number up to 31 hours (actual time in use on a full charge is 6-7 hours per bud). Each of these models’ charging cases is also under 3-inches long and just over 1-inch high, so they’re super easy to fit in a pocket whether you’re taking a jaunt around town or a flight around the world.

Stay in the hear and now

Both models share Jabra’s appealing combination of ANC and HearThrough mode (situational awareness, known as Transparency Mode, SurroundSense, etc., depending on brand). These features—which you can transition between 11 3dB steps—are facilitated by miniature arrays of microphones inside each earbud: four for the Elite 75t and six for the Elite 85t. The ANC mode is very effective considering how small these earbuds are, with particularly good performance filtering the lower and mid frequencies. Those include particularly annoying sounds like street noise, chatter, air conditioners, and distant music.

HearThrough mode is the reverse of ANC, and it purposefully keeps the user apprised of ongoing environmental noise using the onboard microphones even while other audio plays. This mode in particular is great while working alongside others or while exercising solo, and it prevents the need to remove an earbud to engage in a conversation or hear what’s happening around you. And if you do need to take an earbud out, auto-pause mode puts your music on hold until you reinsert.

You’ll need the proprietary Jabra Sound+ app to get started with both models of earbuds. Jabra’s earbuds automatically power on when removed from their charging case. Bring a Bluetooth-enabled smart device in range and the Elite 75t or Elite 85t name should appear in the app.

Beyond pairing and firmware updates, the primary function of the Sound+ app is to grant users granular control over their sound. Without the app, users are limited to simple toggling between HearThrough and ANC modes, controlling media playback, and ending calls, all of which is done by pressing the outer surface of each earbud. If you’re looking to custom-tailor your noise-canceling experience and explore all of Jabra’s available music equalization and white noise options, the app is equipped to deliver quite the bespoke listening experience. MySound is a calibration process that will produce an optimized personal listening profile for you. MyControls gives you the ability to change what buttons do on your earbuds. Still, the interface itself requires a bit of hands-on attention and an exploratory spirit, so if you’re just looking to pop in your earbuds and start listening, you can do that, too.

The Elite 75t is the clear winner for best workout earbuds

If you’ll be using your earbuds while exercising, the Elite 75t edges out the Elite 85t thanks to its IP55 water- and dust-resistant rating. The Elite 85t only manages a lower rating of IPX4. Unlike the Elite 85t, which is only built to withstand intermittent splashes of water, the Elite 75t is protected from dust ingress, as well as direct jets of water from any direction, so it’s guaranteed to better resist damage caused by dirt, sweat, and other workout-related environmental factors. Athletes who are looking specifically for a beast-mode earbud should step up to the $179 Elite Active 75t model, which bumps up to an IP57 waterproof, sweatproof rating.

The size difference between the two models is more or less negligible, with each individual earbud measuring in at just over 0.4 cubic inches, or a little larger than a raspberry. Long-term comfort isn’t an issue with either, but the Elite 75t is more resilient than its more expensive counterpart and this consideration is significant if you’re looking in the market for the best earbuds for running, etc.

The Elite 85t is all about premium performance

It may not keep out dust and water quite like the Elite 75t, but the Elite 85t boasts a longer battery life, a wider frequency response, plus a semi-open design combining pressure-relief vents and more advanced ANC for all-day comfort. When sizing up the Jabra Elite 75t vs Elite 85t, the Elite 85t is much better suited to the rigors of professional use while commuting and working in public spaces or shared offices, especially if you’re not looking for a pair of workout earbuds to routinely sweat into at the gym.

Most significantly, the Elite 85t uses 12mm drivers that are twice the size of the 6mm ones found in the Elite 75t. These larger drivers deliver deeper bass frequency reproduction and an overall more immersive, organic, and accurate music listening experience when compared to their smaller counterparts. For phone calls, in particular, the Elite 85t has a range that stretches from 100Hz up to 10kHz compared to the 8kHz ceiling of the Elite 75t, which means that its larger drivers also achieve better dialogue clarity during phone calls.

When it comes to battery life, the Elite 85t surpasses the Elite 75t here as well. With the charging case, users can enjoy four extra hours of playtime (without noise-canceling). It may not sound like a lot, but if you’re counting on your earbuds to offer continuous use while you’re working or on the move, the extra battery life can make or break your experience. Better still, the Elite 85t charging case is compatible with Qi-enabled wireless chargers, so you don’t have to go reaching for a USB-C cable if untethered is more your style (the Elite 75t is available in a $179 wireless charging variant, but it’s not standard).

While the Elite 75t can’t survive a dunk into a pool or other body of water, it’s much more resistant to damage from water and dust, so it should be your go-to if you’ll be wearing them while working up a sweat. Other active individuals—say, those who commute by walking, biking, or otherwise spend time where they need more isolation and stability—will also appreciate the durability of the Elite 75t.

All others should take a hard look at the extended flexibility that the Elite 85t offers, from offering longer life between recharges to delivering higher-quality audio. These are the ideal long-haul travel companion and the perfect earbud for daily train and plane commuters and, thanks to its large drivers and robust array of six microphones, the Elite 85t is more or less fully equipped to achieve the best audio capture and playback quality possible in such a small form factor. Multiple color options are the cherry on top, which arguably make this model the more stylish and customizable of the two.

Users who simply want a pair of reliable noise-canceling wireless earbuds will not be disappointed by either of these models, but the Jabra Elite 75t vs. Elite 85t debate is a little more nuanced than that. The bottom line here is that if you’re in the market for a compact pair of noise-canceling earbuds, the relatively lower cost and higher durability of the Elite 75t should make them your first choice. If sound quality, longevity, flexibility, and premium finish are important to you, then the Elite 85t should have your attention. What’s certain is that both models of earbuds offer the same level of fantastic active noise-canceling modes, and it’s only made better by the inclusion of HearThrough tech and the granular controls available in the companion app. Either way, you’re guaranteed to enjoy many undisturbed hours of audio anywhere you go.