Has One Laptop Per Child Totally Lost Its Way? 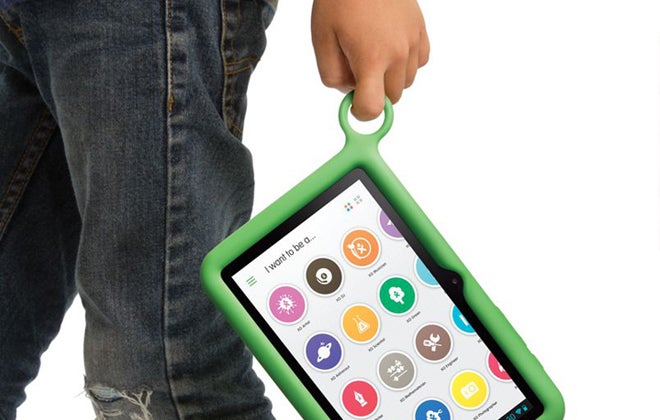 In 2005, Nicholas Negroponte, who previous founded MIT’s Media Lab, founded One Laptop Per Child (OLPC), which works with the United Nations Development Program (UNDP) to deliver low-cost laptops to children in developing nations. But this week, OLPC announced something a little bit different.

The first OLPC device, the XO-1, is a bright green, very small, low-powered Linux machine with lots of adjustments for life as a UN-distributed gift. It’s sturdy, it has excessively large and powerful Wi-Fi antennae for connecting to networks that may not be nearby, it has a significant anti-theft system built-in, and all its other components are as low-cost as possible. It uses an operating system custom-designed for the device, a twist on the Fedora distro of Linux called Sugar–a UI skin, basically–which sharply limits what the laptop could do. It can browse the internet, word process, chat, play games, and there are a few creative tools like a music creator and a beginner’s programming guide. The project aimed to sell the laptop for $100; it never did, partly because that $100 mark wasn’t based on an actual budget of parts and labor, but was merely a nice small round number (the BBC estimated it never even broke the $200 mark) and soon ran into distribution problems. 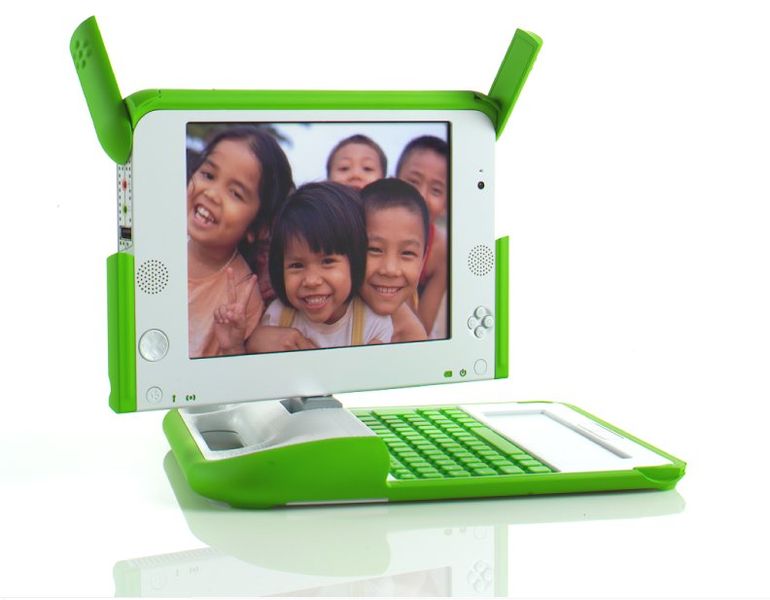 Fast forward seven years, and today, OLPC is announcing a very different product: a $150 Android-based tablet for kids. Not specifically kids in developing nations, either; it’s being sold in Walmart here in the States. If you didn’t know the bright green XO tablet pictured above was created by a philanthropic organization that usually works with the United Nations, you’d think you were just looking at another cheap tablet for kids who have been begging for a tablet but whose parents don’t want to spend $330 on an iPad Mini.

The XO tablet looks a little funky, with its bulbous green rubber case designed by Yves Behar, noted designer of weird-looking gadgetry, but it’s actually a fairly unambitious little tablet. It’s a 7-inch tablet manufactured by Vivitar, a former photographic powerhouse that was bought by a company called Sakar about five years ago and now makes ultra-cheap digital cameras and tablets. The XO tablet runs a modified version of Android 4.2 specifically designed for kids, but it’s compatible with all Android apps. It has a 1.4GHz processor (totally standard and unexceptional), has 4GB of storage (quite small), front- and rear-facing cameras (standard again), and, considering it is probably the same hardware as Vivitar’s Camelio tablet, which was announced at the same time, the screen probably has a standard 1,024 x 600 resolution.

The only unusual aspects of the XO tablet, the only things that set it apart from the dozens upon dozens of cheap, anonymous Android tablets from Vivitar and Coby and Archos and Hisense (and more), are that it has a goofy-looking case, it’s bilingual (you can switch between Spanish and English with the push of a button), and it has a custom-made interface designed for kids. 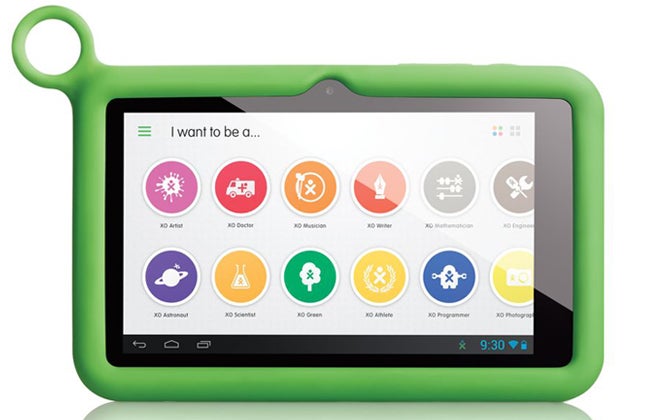 The interface is the most telling aspect of the whole affair. Whereas the XO-1 laptop was designed from the ground up for developing nations, the XO tablet is very much for middle-class western kids. The homescreen looks like an array of apps, but you’re given the prompt “I want to be a…” and then each of the circular icons gives a game or application that encourages that career path. And some of those careers are not exactly options for developing nations. In this late 2012 Der Spiegel story, kids in Ethiopia are given a few OLPC XO-1 laptops and genuinely love them; they learn to read and write, for example, even though their town in the Ethiopian highlands does not have a school.

At the end of the article, one girl says her dream is to become a truck driver, so she can transport her father’s potato crop from the farm to the city. Her father is impressed, if disconcerted, that this girl has such ambitions.

Now compare that to the XO tablet. The app asks what kids want to be, but the answers are heavily slanted toward western kids; options include “astronaut,” “musician,” “artist,” and “mathematician.” The apps themselves simply teach kids about space, music, art, and math, to name a few, and give them the ability to create art and explore the internet. (The tablet also includes about 200 books.) Giulia D’Amico, Vice President of Business Development at One Laptop Per Child, told me that there will actually be localized versions of the XO tablet for each market; the Cambodian version will presumably not have the astronaut option, since Cambodia doesn’t have a space program. (It does have this, though.) “Each country will have different apps,” D’Amico says. But OLPC is billing the XO tablet’s apps as “aspirational.” Will the Ethiopian version have “truck driver” as an app? What would it teach?

The only localized model we know about right now is the American one. But if the aim is truly to give internet access and education to those who have no access to it, why are they bothering with a $150 tablet to be sold in Walmart? American internet and library access isn’t at the same level of coverage as South Korea or Japan, but it’s certainly near the top of the heap. And Walmart sells tablets very similar to the XO for sometimes as little as $50. So what’s the charitable angle in selling a mid-priced Android tablet to kids who can afford it?

D’Amico says that OLPC remains a non-profit, and that the company’s earnings from the XO tablet will go entirely toward providing tablets and laptops to developing nations. But she refused to tell me exactly how much OLPC was even making from the XO tablet, after Vivitar and Walmart had gotten their cuts. Vivitar and Walmart, of course, aren’t in this to educate kids. They’re in it for the money. And the profit margins on cheap Android tablets are pretty slim already; OLPC isn’t going to fund a charitable empire with the earnings from this thing. I do not, frankly, understand why they’re releasing a kid’s educational tablet in the States; I assume Vivitar thinks it can make a profit by attaching the fancy design and prestige of OLPC to its cheap tablets, but I don’t see much in it for OLPC. 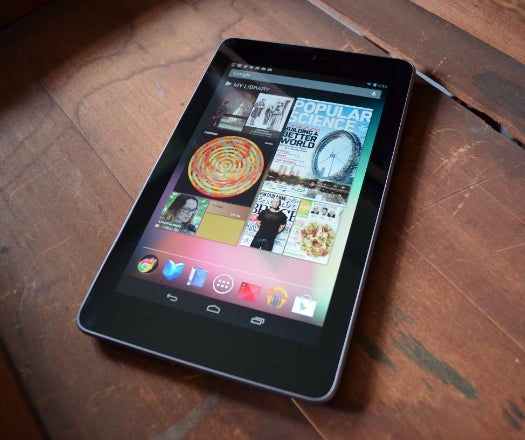 There’s a bigger question, too: is there even a point in making tablets for kids? Android tablets are starting to be very good, and very cheap. The Nexus 7, our favorite Android tablet, is sturdy yet slim, can fit in your back pocket, is super fast and very responsive, and has millions of apps and great support from Google. Its cheapest model has a Nvidia Tegra 3 processor, a quad-core chip that destroys the 1.4GHz chip in the XO tablet. The Nexus 7 also has 16GB of storage (four times that of the XO), a 1,280 x 800 resolution screen (sharper and clearer than the XO), and it’s smaller and lighter than the XO to boot.

The Nexus 7 also costs $200. That’s only $50 more than the XO tablet. The only real benefit the XO has is its interface, which is not nearly as beneficial as the OLPC folks think. This GeekDad article gave a Vinci tablet, a similar Android “edutainment” device, to kids of a few different ages, and found that by the age of about 9 years old, kids were totally bored with the restrictions on a kid-friendly interface. They want the same tools as adults, the same games, the same access to the internet, the same apps.

The XO tablet is a total change of pace for OLPC; the announcement post on OLPC’s site doesn’t mention developing nations as a target market for the device at all. Instead it talks about fancy design and parental controls. It’s not a do-gooder device: it’s a Walmart-bound cheapie kiddie tablet. And those don’t really need to exist.

OLPC is a non-profit that planned to change the world, through cutting-edge technology, by connecting its poorest corners. And now it’s selling unnecessary gadgetry to middle-class Americans. Has it completely lost its way?