An easel-inspired hinge turns this singularly weird laptop into a tablet or an all-in-one. 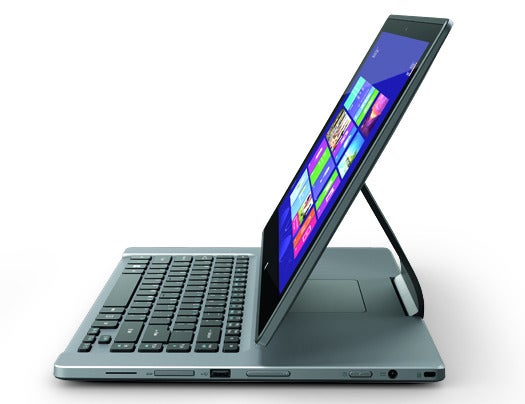 At an event this morning in New York City, Acer announced a slate of new gadgets, some boring (an iPad-Mini-sized Iconia tablet, a small convertible laptop) but one distinctly…odd. The Acer Aspire R7 isn’t quite like any other laptop out there.

Windows 8’s emphasis on touchscreen navigation has led to a lot of unusual laptop designs, which is exciting; there’s Dell’s vertically-flipping screen, Lenovo’s excellent bend-all-the-way-around Yoga, and now Acer’s easel-inspired design. The hinge is actually called “Ezel,” which we assume is pronounced like “easel,” and works sort of like the old iMac G4, moving up and down and forward and back. The hinge also allows the screen to lay down flat on the keyboard, so the computer looks more like a tablet.

Interestingly, the Aspire R7 has switched the positions of the keyboard (a nice-looking chiclet affair) and the trackpad, so the trackpad actually sits above, closer to the screen. The idea is that you use the trackpad less in a Windows 8 device, because so much of the operating system encourages you to touch the screen instead. Thanks to the hinge, you can bring the screen even closer to you, right over the trackpad, making the laptop look kind of like a jumbo iPad with a keyboard case.

The laptop has the standard specs; 15.6-inch 1080p display, Intel Core i5 processor, 6GB of memory, a 500GB hard drive with a 24GB SSD to load the OS faster, plus HDMI, SD reader, and three USB ports. The laptop looks thin, but we’re skeptical about the utility of using a 15.6-inch laptop as a tablet. Even the very thin and light Lenovo Yoga 13 proved kind of heavy and unwieldy to use in “tablet mode,” but perhaps you could use it for tabletop demos or something.

No price yet, but it’ll be out May 14th as a Best Buy exclusive.