Microsoft Brings Cortana To Windows 10, But She Was Better In ‘Halo’

But still better than Clippy 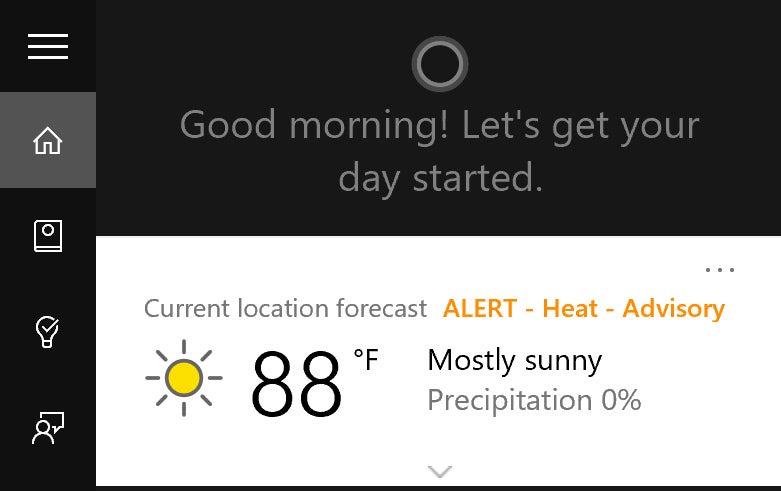 I’ve known Cortana for a long time. Fans of the video game Halo will remember the spunky, feminine AI as a wartime companion, who has since been translated into real code conscripted into Windows 10. In the game, Cortana was a quick-witted, near-omniscient guide; in real life, not so much.

From my time spent talking to the AI-turned-personal assistant, I’ve felt exultant, frustrated, neglected and misunderstood. I may be too personally invested in technology, but there’s a very real emotional need to be understood when speaking to something, and repeated failure is harrowing. Now, this is just me speaking out loud to Cortana — I’ve had the opposite experience when using her text search features.

There are some things Cortana does very well— “she” is great at recognizing when to listen, reciting basic information like stock tickers and the weather, and like I said, text searching is great. (I know it’s silly, but I’ll refer to the software as a “she” for this article, as Microsoft does.)

There are two modes of using Cortana: voice-activated search and text search. Launching Cortana herself is incredibly easy, she responds quickly and naturally to “Hey, Cortana” after you enable that feature in the settings. Computer peripheral maker Satechi is even marketing a Bluetooth “Cortana Button” that launches the personal assistant from afar.

To search by text in Windows 10, you can either select Cortana’s dock with your cursor, or just hit the Windows 10 key. From there, Cortana will predict which application, document or web search you’re looking for each time you hit a new key, and you execute the search by hitting the Enter key. I found myself using this to launch apps more than the fan-favorite Start menu, but that’s also just how I prefer to launch apps normally. As a Mac user who uses Spotlight Search, and previously used the app Quicksilver since 2011, it’s great to see Windows incorporating this idea of being able to launch specific apps and documents with just a few keystrokes.

You can also tell text Cortana all of your favorite sports teams, types of cuisine, stock to watch, and meetings on a feature called your Notebook, and she’ll keep you updated on that information in her bar next to the start button. If I were naming this area of the program, I would call it “Cortana’s Corral,” because that’s fun and most of the user experience isn’t. If Cortana doesn’t understand something, or can’t find it locally, it becomes a web search. That’s a feature that spans over text and speech, which I found to be the software’s biggest issue.

Anything I would ask Cortana that she didn’t understand became a simple web search. And Cortana didn’t understand a lot. Luckily, each search starts a new tab so previous browsing isn’t interrupted, but after trying to get directions home eight times in a row, the tabs start to accumulate. Then you have to close those tabs, which is a small yet time consuming task, and I only have so many seconds in my day. I would average asking a question five to eight times before I would get frustrated or finally figure out what Cortana wanted to hear. I also never got the feeling that voice Cortana was informed by the interests I had programmed into my Notebook, like the kinds of food or sports teams I liked. If I had to sum it up, the voice aspect of Cortana is like living with an omniscient significant other who never remembers your interests, but you know they could if they just tried. This would be a terrible thing to say about a human being, but I guess I hold computer programs to higher standards.

Cortana takes up some of the most envied software real estate in the world.

Cortana takes up some of the most envied software real estate in the world, right next to the Windows Start button. Microsoft has more than a 85 percent marketshare in the operating system market, and users are jumping over to the free Windows 10 upgrade at around 16 people per second. (If that number is the average today, more than 1,300,000 people will install Windows 10 in 24 hours.) All in all, Microsoft made a good move putting Cortana in the middle of Windows 10. As she improves (which she definitely will), and “artificial intelligence” becomes a more intelligent, Microsoft might see itself ahead of the curve, somewhere they haven’t been in quite a while. Plus, it’s already way better than Clippy, Microsoft Office’s initial attempt at a digital helper.

I’m putting Cortana through her paces because she has stark competition. When I thought I was being too intense with the questions I asked, like how to get home after work, I would run the same question by Siri, Apple’s AI assistant for the iPhone, and get an instant result. Siri has had more time to “get to know me,” but Cortana didn’t even ask where home was. And that’s what we want in a digital personal assistant that we carry everywhere, right? That’s what all these programs like Google Now, Siri, and even latecomers like Hound are striving for. We want something that can keep track of our life with the precision of a machine, and knows what information it needs to give our hectic days little more continuity. And it’s coming. But it’s not here now.